The defense had seven sacks and two forced fumbles during the game. 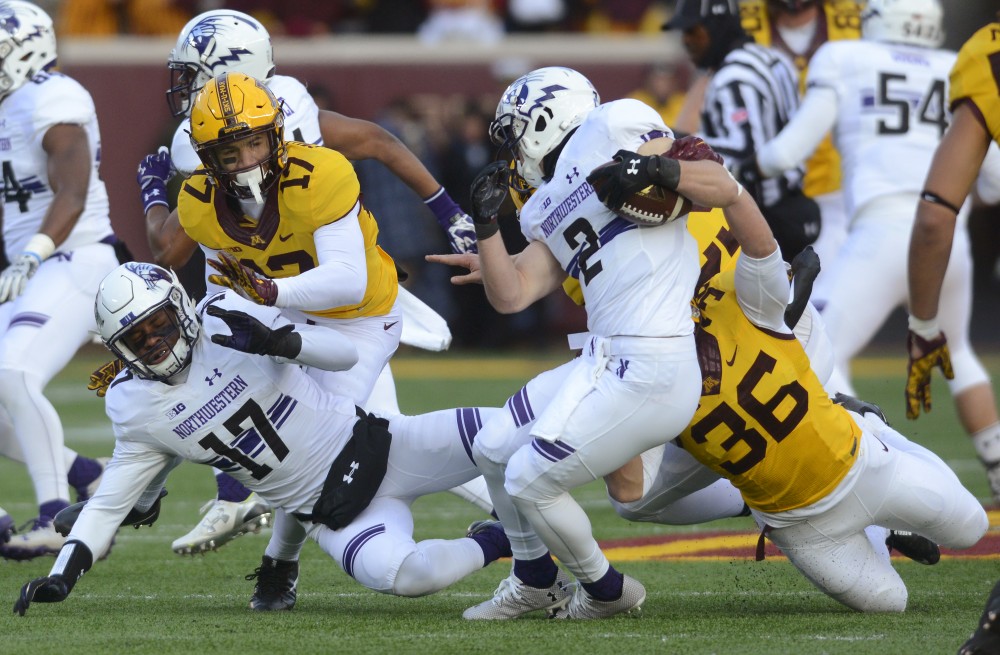 Defensive lineman Steven Richardson made it clear he was especially motivated for Saturday’s game against Northwestern.

In a postgame interview, the Chicago native said he wasn’t recruited by Northwestern after head coach Pat Fitzgerald looked at his below-average height in high school and determined he couldn’t play for his team.

Richardson remembered that meeting on Saturday. He had two sacks and a forced fumble that helped Minnesota earn a 29-12 victory over Northwestern.

“I saw [Fitzgerald] come into my high school coach’s office and … just look at me like I’m way too short to play the game,” Richardson said. “It was really nice to play one of these types of games in front of him just because he doubted you.”

But it wasn’t just Richardson who was a force on defense.

The defense totaled seven sacks Saturday — the most in a game this season. One more sack would’ve tied the Minnesota record.

“Defensively, there is no question that they kept us in there, and they gave us a chance to win,” said head coach Tracy Claeys.

The Gophers held the Wildcats scoreless in the first half, which was the second time Minnesota had done that this season.

One critical stop came on fourth-and-1 in the second quarter when the Wildcats had the ball at Minnesota’s 16-yard line and trailed by nine.

Lynn burst through Northwestern’s offensive line and quickly got a hand on running back Justin Jackson. Jackson was swarmed by other Gophers defenders and lost three yards on the play.

“We game-planned for them really well,” Lynn said. “We ran it a lot in practice. It’s just more about reacting at that point.”

Cashman continued to be a pleasant surprise for the Gophers’ defense this season. The sophomore linebacker has five sacks in his last three games despite having only one previous sack in his career.

He also led the team in tackles Saturday and forced a fumble.

“[Cashman’s] a man possessed,” Lynn said. “We kind of set some plays up for him to make, and he’s doing a great job at it.”

The Gophers also stopped both of Northwestern’s 2-point conversion attempts.

“Being able to stop them and stop that kind of running back … it just defines who our defense is, and we’re not going to give up any points lightly,” Richardson said.

The Wildcats’ Jackson was limited to 90 rushing yards on 22 attempts.