McCallum has played in the infield and outfield this year, as the Twins give him a shot to prove his versatility. 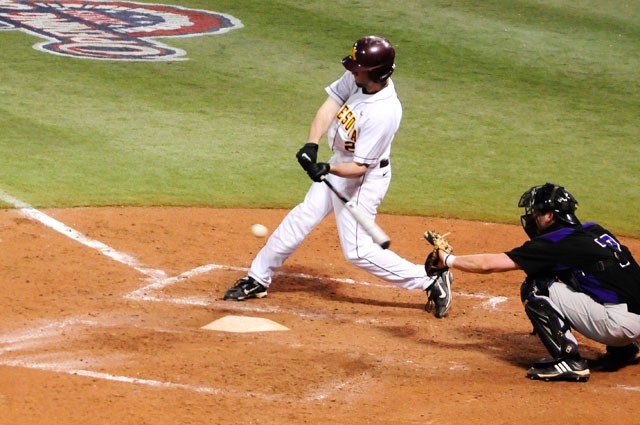 In the wake of a recent injury to Minnesota TwinsâÄô top prospect Aaron Hicks, former Gophers standout Derek McCallum has been promoted from the Class-A Beloit Snappers to the clubâÄôs high Class-A ball affiliate, the Fort Myers Miracle.

âÄúItâÄôs obviously a good opportunity anytime you get moved up. Stuff happens pretty quick. They tell you youâÄôre on a plane in a couple hours, you pack up everything you got and you head down here,âÄù McCallum said. âÄúItâÄôs an experience and itâÄôs still relatively new.âÄù

He was hampered by injuries last season, dealing with a broken forearm and torn cartilage in his wrist.

An All-American second baseman for the Gophers, McCallum has yet to find his niche in the minors as heâÄôs had to split time in the outfield and at second base.

Formerly strictly a second baseman, heâÄôs shifted to more of a utility role this season, likely to display versatility in the hopes of moving up the minor league ladder.

Director of Minor Leagues Jim Rantz said the organization still views him as a second baseman but is giving him an opportunity in the outfield in part to âÄúchallenge him.âÄù

Coming into the 2010 season, he was viewed at as a Top-50 prospect within the Twins organization but that has since changed, as he was not on the list entering the 2011 campaign.

McCallum, 23, was one of the elder statesmen of the Snappers, as a majority of the players on the roster are 22 and under.

In the cut-throat business of minor league baseball, age can quickly start to work against players. The older a player gets relative to his level, the more is expected in terms of production, though Rantz said the Twins donâÄôt always go by that philosophy.

If players consistently fail to produce, the prospect mill churns out an abundance of young players every year eager to replace their veteran counterparts. Rantz said the Twins are more prone to look at a program from which the player came, though, before they look at age to assess development.

Despite his struggles, McCallum is confident that he can get things turned around.

âÄúMaybe a change of scenery or a different atmosphere will bring things around a little bit, but IâÄôm just going to keep working at it and whatever happens happens,âÄù he said.

If he canâÄôt turn things around, he may not be sticking around too much longer.

A new crop of young talent will soon be infused into the minor leagues, as the MLB First-Year Player Draft will take place from June 6-8.

McCallum is 0-5 with two walks through three games with the Miracle.

Hicks, who McCallum replaced on the roster, is on the seven-day disabled list and will be out at least a week with strained ligaments in his left hand, according to Rantz. He sustained the injury when a fielder stepped on his hand while Hicks was sliding back to third base.