Bunge Tower will be redeveloped into apartment complex

The tower will start construction as early as 2018 and feature a mix of artist housing and affordable housing for low-income residents. 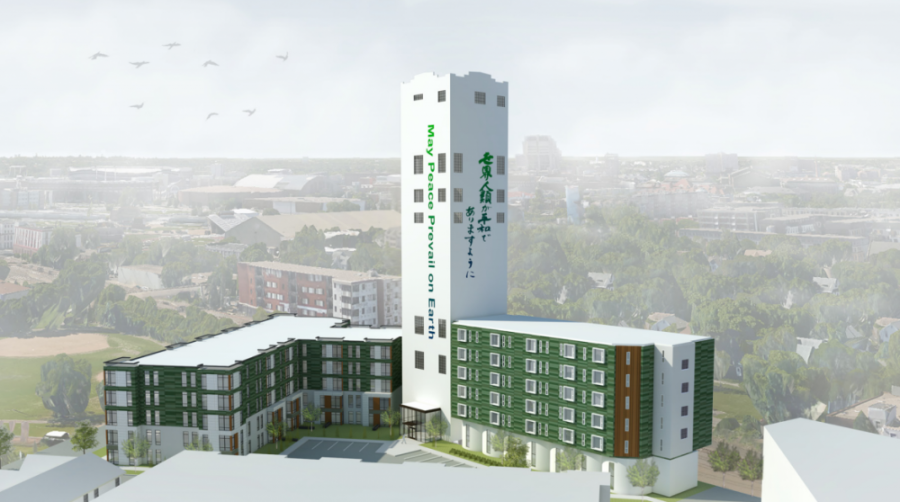 Photo Courtesy of Project for Pride in Living

A University of Minnesota neighborhood landmark is now a step closer to its planned redevelopment.

The Namaste Apartments project, which would convert the Bunge Tower in Southeast Como, received $1.2 million last month to start on plans to build mixed-income apartments around the main tower. If more funding comes in 2017, construction could start as early as 2018.

Mary Novak, senior project manager for Project for Pride in Living (PPL), said the funding from Minneapolis’s Affordable Housing Trust Fund is the first for the project. PPL has owned the Bunge Tower site since 2007.

She said the cost to build a single unit at the site would be nearly $250,000. The construction would include 150 apartment units, Novak said.

Original plans for the site called for the creation of artist lofts. While still planned, only 50 units would be reserved for artists, Novak said.

The rest, she said, would be reserved for low-income earners who make 50 to 60 percent the annual metropolitan income.

Another eight units would be held for people experiencing long- term homelessness, Novak said, adding there has been a shortage of affordable housing in recent years.

“[The cost of housing] is just really taxing on individuals and families … there’s other things like school and healthcare that also need to be paid,” she said.

While the apartments are not designed for student housing, students could still rent an apartment if they meet certain conditions, such as being a single student-parent or a family where one or both parents are students, Novak said.

The apartments would act as a sanctuary from city life but still give residents access to the perks of the University, Dinkytown and nearby businesses, she said.

The apartments would have open areas, peace gardens, yoga studios and meditation rooms.

Novak said the head tower would be kept in place, with the apartments being built around it at the sites of the building’s silos.

One current plan is to use the head tower as the main lobby entrance, Novak said, but renovating the whole tower isn’t part of PPL’s plans.

As the Bunge Tower area is redeveloped, keeping the structure’s iconic shape is important to the neighborhood, Olson said.

“It’s a good sign development is happening soon, before the tower has any more structural damage or any other fatality or injury happens on the premises,” he said.

In recent years, two women died from falls inside the abandoned structure while exploring the tower.

Minneapolis Ward 2 City Councilman Cam Gordon said plans to redevelop the Bunge site have been considered since 2007, right after the first fatal incident.

Gordon said the 2015 death prompted police and fire departments to institute more security checks at the tower, already a standard practice by PPL.

“We couldn’t wait for some restoration plan to come along,” Gordon said.

With the new mixed-income housing plans, the apartments could address the need for affordable housing and help those facing long-term homelessness, Gordon said.

“This could be a space that really builds a community together,” Novak said.