Students protest ahead of Kavanaugh vote

Students and community members organized against the Supreme Court nominee Wednesday and Thursday. 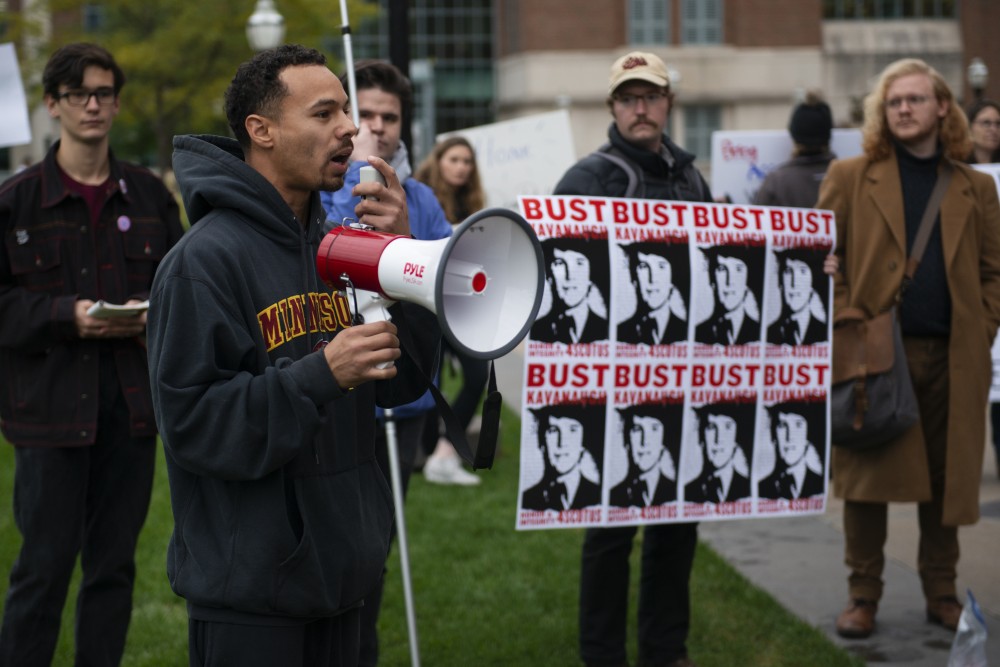 Todd Gramenz addresses the crowd at a demonstration put on by Students for a Democratic Society. The event, held on Thursday, Oct. 4 outside of Coffman Memorial Union, opposed Brett Kavanaugh's nomination to the Supreme Court.

Around 40 people gathered outside Coffman Union on Thursday evening to protest the nomination of Brett Kavanaugh to the U.S. Supreme Court.

The protest, organized by the University of Minnesota’s chapter of Students for a Democratic Society, was part of a national “day of action” put on by SDS. People gathered to listen to speakers, voice their opposition to Kavanaugh and support survivors of sexual assault.

Skyler Dorr, a member of SDS and recent University graduate, said while the event was organized last-minute, it was important for students to turn out given the stakes of the nomination.

“We have somebody who is in a position for life who’s choosing life or death situations for people in the role that he’s in,” Dorr said. “They are themselves criminals who think they get to be justices and we have to say no to that.”

Jackson Bianchi, who hosted the event for SDS, called Kavanaugh “unfit” to hold a position on the Supreme Court. “We are seeing the U.S. Senate, at the expense of [Christine Blasey Ford] and others, nominate and, I believe they will place … Kavanaugh on the bench,” she said.

Sarah Volz, a University graduate student, said it was demoralizing to hear people in power demeaning and devaluing the experience of sexual assault survivors. She said it was important to show that the survivors are not alone.

This demonstration comes one day after Wednesday night’s vigil in front of Northrop Auditorium, which was held to show solidarity with sexual assault survivors in response to Kavanaugh’s nomination. The vigil was organized by the National Association for the Repeal of Abortion Laws and Pro-Choice Minnesota, a women’s rights advocacy group.

The Senate vote to confirm Kavanaugh is expected to start Friday morning. Sunny Lim contributed to this report