The Gophers beat Mercyhurst and New Hampshire en route to the title. 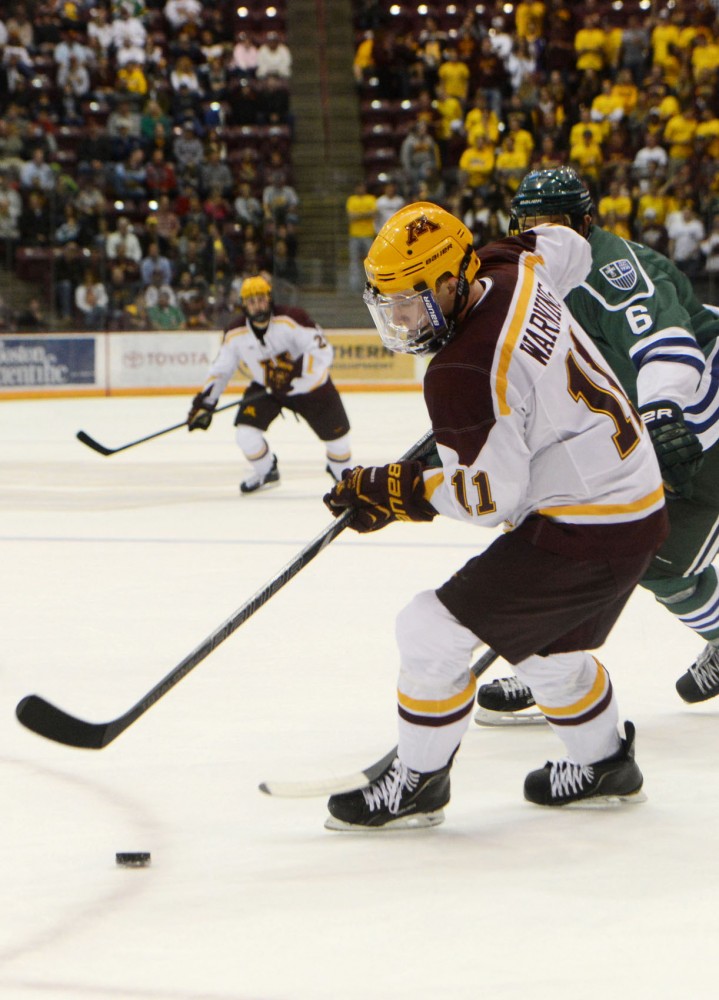 Minnesota junior Sam Warning handles the puck against Mercyhurst in the Ice Breaker Tournament at Mariucci Arena on Friday night. The Gophers won 6-0.

Gophers sophomore goalie Adam Wilcox made the big save in the big moment, as he always seems to do.

This time, he brilliantly flashed the leather with seven seconds left to secure the No. 5 Gophers’ 3-2 win over No. 13 New Hampshire on Saturday night at Mariucci Arena.

“He’s got a flare for the dramatic,” senior defenseman Justin Holl said. “He was just laughing when he came back to the bench.”

The win earned the Gophers the Ice Breaker Tournament title, as they improved to 2-0-0 on the season.

Minnesota beat Mercyhurst 6-0 on Friday night to make it to the final.

Gophers head coach Don Lucia said playing for a trophy in the first few games of the season might have given his team a little extra motivation. He added that playing a game against a ranked opponent so early is also beneficial.

“It’s a good measuring stick,” Lucia said of the win against New Hampshire. “We had to play a good, smart game tonight, and I thought we did.”

After a scoreless first period, the second stanza was filled with fireworks.

Minnesota responded with a rush and threw pucks on net until freshman forward Hudson Fasching tied the game less than four minutes later.

The Gophers fell behind again in the second when senior center Nick Sorkin scored. But barely a minute later, the tournament MVP, junior forward Sam Warning, scored to knot the game at 2-2.

“No one’s going to give up,” junior forward Seth Ambroz said of the team’s comeback abilities. “When we answered those goals right away, it gave us a lot of momentum.”

Freshman forward Vinni Lettieri broke the tie with the eventual game-winning goal with 2:10 to play in the second. Lettieri gathered the puck, spun around and fired from the circle to beat Wildcats junior netminder Casey DeSmith.

That goal proved to be the difference.

Minnesota outshot New Hampshire 34-23, but DeSmith’s solid goaltending kept the Wildcats competitive throughout. He finished with 31 saves on the night.

Though they skated away with a win, the Gophers were miserable in the special teams department. Minnesota was 0-for-6 on the power play Saturday and failed to produce any really meaningful
chances.

Its penalty-kill unit wasn’t much better, as both of New Hampshire’s goals came with the man advantage. The Wildcats were 2-for-5 on the power play.

Lucia, though, didn’t seem concerned with the early struggles.

Minnesota’s weekend may have ended well, but it started even better.

The Gophers received a strong showing from their junior class against Mercyhurst as Ambroz, Warning and Kyle Rau scored the first three goals Friday night.

Rau scored the Gophers’ first goal of the season on a power play in the first period, tapping in a shot from the point.

It all started with Ambroz’s goal — by far the most bizarre of the night.

Ambroz fired a shot that deflected off the left post. He gathered his own rebound and flipped the puck near the crease, where it bounced off the skate of a Mercyhurst defender and into the net.

Lucia said that goal flipped the script in the game. He added Ambroz could try that 100 times and it might not happen again.

“That’s how he scores his goals,” Wilcox said. “No one else is going to do that.”

Warning added the team’s third goal midway through the period, and Kloos scored his goal a little less than five minutes later.

Sophomore defenseman Mike Reilly added a goal, and Brodzinski flicked in a wrist shot with less than two minutes remaining.

Wilcox notched his fourth-career shutout in the game and was largely unchallenged by the Mercyhurst attack. Wilcox finished with 46 saves on the weekend.

Fasching, Wilcox, Warning and Rau were named to the all-tournament team.

Minnesota travels to Bemidji State next weekend to take on the Beavers.