With two games at Target Field and one at Siebert, Minnesota wins series over Iowa

Minnesota won the first two games at Target Field before losing on Sunday at Siebert Field. 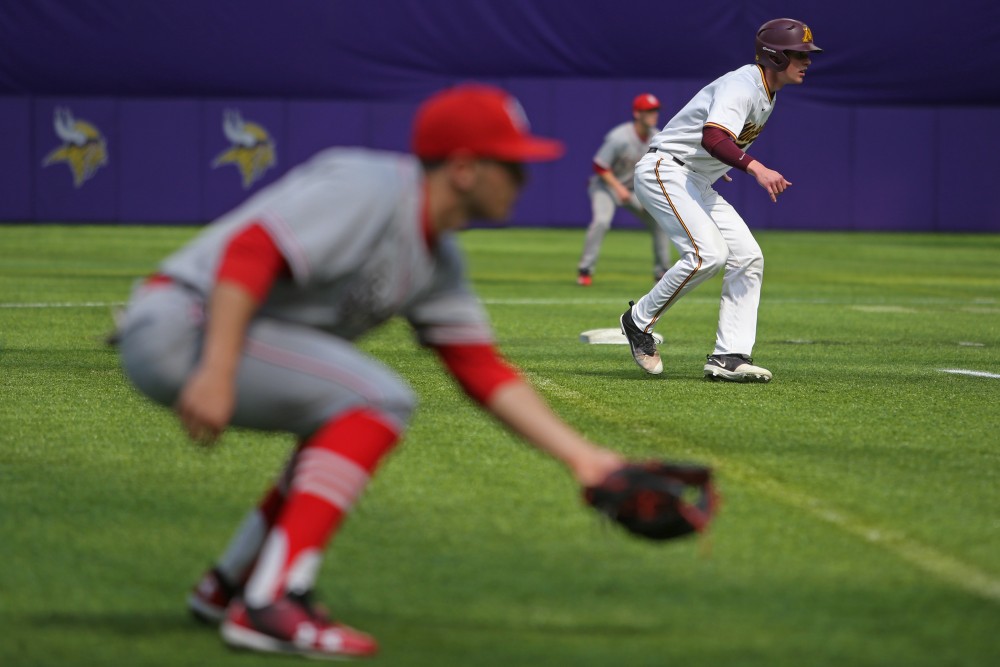 Catcher Eli Wilson makes his way to third base during the game against St. John's University on Saturday, March 31, 2018 at U.S. Bank Stadium.

The last time Minnesota faced Iowa, it was the last game of the season in the 2017 Big Ten tournament. The Hawkeyes knocked the Gophers out of the conference tournament and ruined their chances of making it into the NCAA tournament.

The Gophers overcame that memory and took the series over the Hawkeyes  (23-13, 7-6 Big Ten) this time.

Minnesota (25-11, 9-2 Big Ten) won twice at Target Field before faltering in the first game of the season at its home stadium, Siebert Field. On the first day, the Gophers won 4-3, then they won 3-0 and on Sunday they couldn’t get the sweep, losing 5-3.

“That was last year, we don’t look to be motivated by what happened last year,” head coach John Anderson said. “It’s more about this year and this year’s team, and our job is to go out there and play the game at a high level.”

After a quiet first three innings on Sunday, the Hawkeyes started getting hits. The Gophers made mistakes, allowing the Hawkeyes to get out to a 3-0 lead by the top of the fifth.

Left fielder Ben Mezzenga dropped a fly ball, allowing the first run in at the top of the fourth. Pitcher Sam Thoresen had a balk that set up two more runs on sacrifice ground balls from Iowa in the fifth inning.

The Hawkeyes took the victory 5-3 on eight hits, as the Gophers did not take advantage of their usually productive offense to send base runners home.

“Overall, I felt like we still found ways to compete and we found a way to win two games even when we weren’t swinging it really well,” infielder Micah Coffey said. “We’ll get back to the drawing board, take a look at the film and make adjustments moving forward.”

Saturday’s game at Target Field saw Patrick Fredrickson take the mound for the Gophers. He pitched 7 2/3 innings, allowing six hits and zero runs in that span.

On the offensive side, catcher Eli Wilson accounted for all runs scored. Wilson had three RBIs off a single in the third inning and a sacrifice fly in the fifth inning to seal the series-winning victory.

“We got so many guys in our lineup that can hit that there’s almost always a guy on base when I’m up,” Wilson said. “I think my job is to just try to get those runs in however we can.”

On Friday’s series opener at Target Field, The Gophers played catch up with Iowa for much of the game. The team eventually took the lead in the seventh inning when infielder Luke Pettersen hit a double that scored outfielder Jordan Kozicky.

They would keep the 4-3 lead, and freshman closer Max Meyer earned his ninth save.

“Talent, composure, poise, understands himself, knows how to make adjustments on his own,” Anderson said about Meyer. “That’s why he’s got nine saves. What can you say? I’m glad he’s on our team.”

Outfielder Toby Hanson returned to the lineup for the first time in three weeks. The usual outfielder only played designated hitter, as he wasn’t healthy enough to take the field.

Hanson batted in the most runs for Minnesota last year.

“It’s really good to get back out there,” Hanson said. “It was only three weeks, but that three weeks felt like a pretty long time when you’re not out there [and] able to play with your teammates.”

Hanson said though he was back at the plate, his wrist injury was not at 100 percent yet.

“I think the big thing is just kind of keeping it loose throughout the game. … It still gets stiff, but it’s definitely getting better and better each day.”

The Gophers will continue play on Wednesday at home against South Dakota State.