For many, federal protections for those with disabilities are not enough

ADA requirements may not be enough to ensure accessibility to those on campus that need it, advocates say. 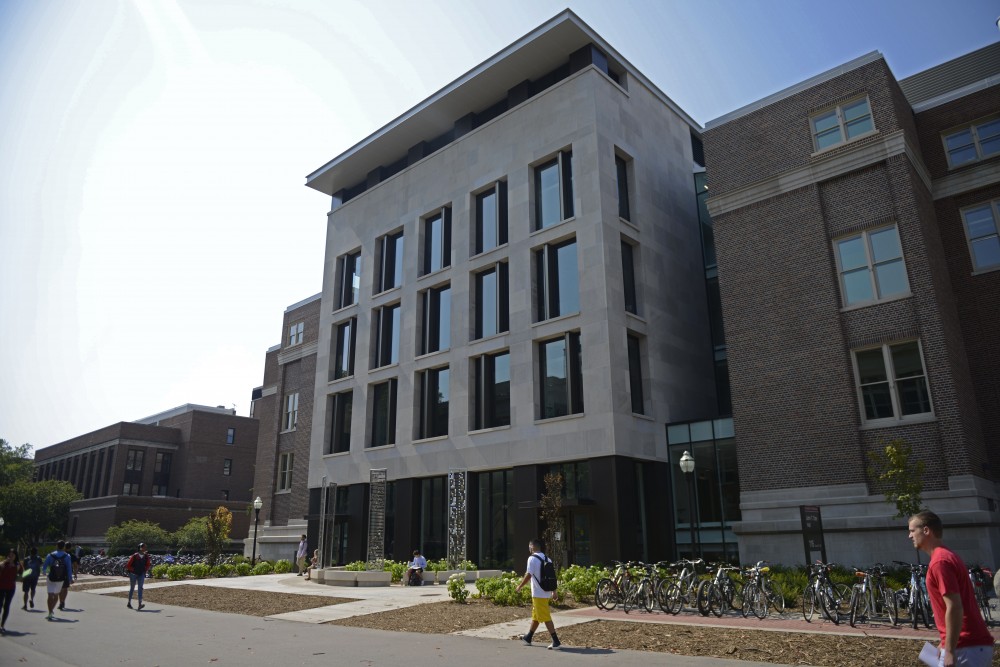 The Tate Laboratory of Physics as seen from Church Street on Monday Sept. 11. on East Bank. The sculptures in front of the building hide scientific puzzles about the merging of physics and earth sciences.

Tate Hall, like many other buildings on the University of Minnesota’s Twin Cities campus, is compliant with the federal Americans with Disabilities Act.  The bathrooms have accessibility stalls, there are multiple elevators and the building has two entrances for those with mobility challenges.

Despite its compliance, it can seem hard, if not impossible, for some attending classes to navigate the building alone.

The ADA is a federal law enacted in the 1990s to mitigate discrimination of people with disabilities. While there are multiple sections, one aspect requires public buildings, like those on the University’s campus, to meet certain accessibility standards.

According to Katrina Jirik, who has multiple disabilities impacting her motor control, communication and sensory perception, many buildings on campus are extremely difficult to navigate, even accounting for the aid she depends on to travel the halls in her power chair.

Katrina, who recently finished her graduate program at the University, pointed to the bathrooms in the recently renovated Tate Hall.  In compliance with the ADA, each bathroom in Tate has accessibility stalls.  However, for those with mobility challenges hoping to get in or out of the bathroom, there is no push plate, often forcing them to wait for outside assistance. One accessibility entrance to the building requires two doors to enter. While the first has a push plate installed, the second does not. According to Katrina and her mother Barbara, who occasionally acts as Katrina’s aide, this adds a second layer of difficulty in an area specifically designated for those with mobility challenges.

“These [are] sort of small frustrations, but it is those small frustrations that keep students who are already enrolled from staying because it’s so much extra work,” said Sally Kohlstedt, who was Katrina’s adviser. “It’s incredibly inhibiting [and] time consuming.”

According to many with mobility challenges that use walkers or wheelchairs, this problem is not limited to Tate Hall. Many other buildings on campus have similar issues.

“Part of the problem is that the ADA is looked at as a series of specifications that must be met, but not as a way to ensure participation of all sorts of people within the building. People with disabilities are a marginalized group in our society and as such, are rarely part of the process, so things get designed to meet specifications and not actual needs,” Katrina said in an email to the Minnesota Daily.

Many advocates say people see the ADA as a minimum that can be checked off and forgotten. To them, this is a potential explanation for why buildings can be both compliant with the decades-old law but still fail to allow those with mobility challenges fair and easy access into a building.

“The ADA, like any discrimination law, is prone to … people [meeting] the legal portion, and they don’t meet the ideological goals of it,” said University senior Cole Anderson, who has dealt with troubles surrounding accessibility.

According to Katrina and Barbara, the process of requesting adjustments from the University, such as adding door openers, has been a major challenge.

“A door opener is considered a personal accommodation, which you have to request from Disability Services. You have to give a reason why you are in that building and having to use the bathroom is not acceptable,” Barbara said.

The University is responsible for ensuring ADA code is met on campus; however, it is not obligated to provide support beyond law. For this reason, some say it is easier for students to ask their advisers, teachers or department heads responsible for the space in question to make changes, as opposed to going to the Disability Resource Center.

“If an individual at the U of M requires a modification to their physical environment to participate in work, an activity, or class, the DRC works through the interactive process with the individual and other necessary parties to determine the best possible reasonable accommodation,” said Roberta Kehne,the center’s physical access coordinator. The DRC works to meet the highest standards of accessibility, she said.

According to Ryan Machtmes, president of the Organization for Graduate and Professional Students with Disabilities, advocacy for those with disabilities goes beyond mandatory compliance.

“Minimum compliance is, in our opinion, insufficient for the need,” Machtmes said, adding that while many student advocates on campus feel that ADA does not do enough, the University is only required to comply, not go any further.

According to Peter Berg, a representative from the Great Lakes ADA Center, which works to educate and train organizations on how to comply with the federal law, the ADA is not meant for universal accessibility. Instead, it is to allow a reasonable amount of individuals easy access to a building.

“You could have a brand-new building, newly constructed, [that] completely complies with all the minimum ADA accessibility requirements,” Berg said. “But, it still may not be usable by a certain segment of the population of people with disabilities because of that individual’s particular disability or functional limitation. So even in a building that is fully compliant, some people may have difficulty [using it] or be unable to use portions of it.”

While ADA-compliant buildings may not accommodate everyone, some buildings across the Twin Cities do not meet code at all, said Ondrew Tillotson, an officer of the Disabled Student Cultural Center. Managing to comply is a prerequisite for any further action the University needs to take, he said.

Student groups like OGSPD are working to tackle some of the accessibility issues on campus, gathering data and creating awareness campaigns.

Graduate student and OGPSD member Mahesh Mathew is in the process of conducting a three-part survey of people with disabilities on campus to gather information on inaccessible areas at the University. The results, which he plans to release in the next few months, will showcase areas and experiences that are particularly challenging.

Additionally, Anderson, an undergrad in the geography department, is working on a project to gather blueprints of University buildings. These blueprints, which he plans to adapt for those with disabilities, can then be distributed to anyone who can benefit from having an increased awareness of possible paths they can take to a class.

“I see a lot of my blind colleagues spend a lot of energy [trying] to navigate [buildings],” Anderson said. “They have to spend a lot of time figuring out where everything is.”

This month, OGPSD is holding a campaign to gather video evidence of inaccessible areas on campus. By renting out GoPro cameras to students with accessibility barriers, the group can record and report particularly problematic areas. OGPSD intends to send the evidence to the administration and the Minnesota Student Association in an appeal to have the areas amended.

“[These] are important conversations that need to happen for the benefit of not only students with disabilities on campus, but really all students, because when a university is accommodating and supportive of all of the students, then all students grow and work together,” Machtmes said.