Behind a four-goal third period and a constant chorus of whistles, UND earned a 5-3 victory over the Gophers, knocking Minnesota down to the third seed for the WCHA playoffs. 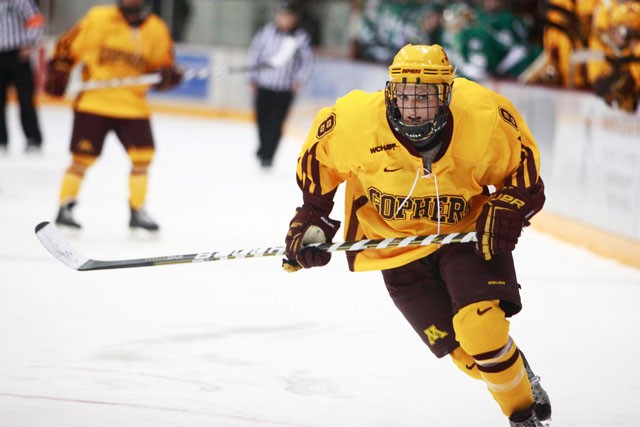 After defeating North Dakota 5-3 Friday night, the Gophers needed a win Saturday to secure the second seed in the WCHA playoffs.

UND, ranked eighth in the national polls, needed another marquee win to bolster its rÃ©sumÃ© with the NCAA tournament just three weeks away.

Behind a four-goal third period and a constant chorus of whistles, UND earned a 5-3 victory over the Gophers, knocking Minnesota down to the third seed for the WCHA playoffs.

The SiouxâÄôs lone senior, Stephanie Roy, scored the game-winning goal midway through the third period and Mary Loken added another goal late in the third, as the Fighting Sioux held on for a win they desperately needed.

âÄúTheir season was on the line tonight,âÄù head coach Brad Frost said. âÄúThey needed a win just to stay in the national picture.âÄù

The weekend began with a bang for the Gophers, who outscored UND 3-1 in the first period Friday night. Freshman Amanda Kessel scored two goals and nine different players recorded a point for Minnesota, as they built a three-goal lead in the third period before winning 5-3.

Junior Anne Schleper gave the Gophers a 1-0 lead early in the first Saturday, but North Dakota tied the game at one heading into the third period. They eventually overtook the Gophers with a four-goal third.

Both games were marked by a rash of penalties. UND was assessed 10 penalties Friday, including a 10-minute game misconduct by Sara Dagenais. Minnesota capitalized, scoring three power play goals.

On Saturday, the Gophers lived in the penalty box; they took 12 penalties, resulting in three UND goals.

While Frost was pleased with his teamâÄôs power play performance, he says the referees were too quick to blow the whistle for most of the weekend.

âÄúJust way too many penalties. Some warranted, but many were not,âÄù he said.

The Gophers were 28-0 all time against UND heading into this season. After a season series marked by a surprising sweep by the Sioux at Ridder Arena, an after-the-whistle brawl and a high volume of penalty minutes (210 in four games), UND ranks among Wisconsin and UMD in terms of the Gophers biggest rivals.

The Gophers host Ohio State in the first round of the WCHA playoffs next weekend.