Some lawmakers are pushing a highly amended bill that requires clinical trials and blocks smoking the drug. 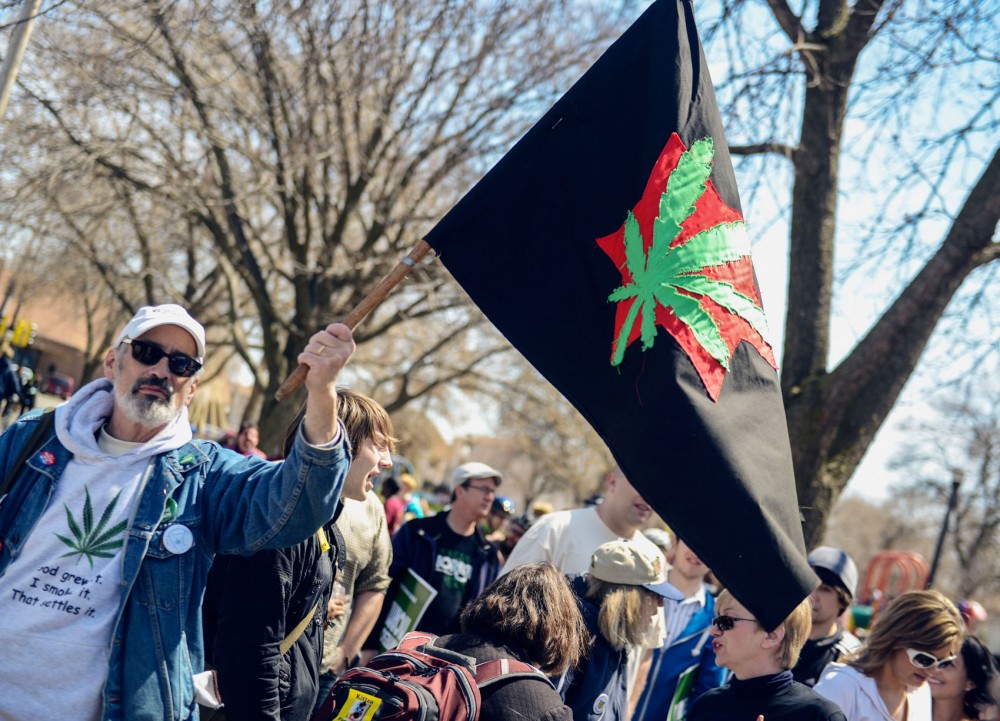 Marion Delgado, supporter of the National Organization for the Reform of Marijuana Laws, waves a flag displaying a marijuana leaf in in preparation to march in the 40th Annual MayDay Parade in Minneapolis on Sunday.

With new support from law enforcement, the Minnesota Legislature is one step closer to legalizing medical marijuana — but access and usage could be far more limited than originally intended.

New amendments to this session’s medical marijuana bill remove the option for patients to smoke the drug and require clinical trials to test the drug’s effectiveness — research the University of Minnesota could potentially host.

On Friday, a House committee discussed the latest version of the bill, which Rep. Carly Melin, DFL-Hibbing, is sponsoring. In its current form, the legislation allows patients to use marijuana with a vaporizer under clinical supervision or to take the drug in pill or oil form.

Law enforcement has voiced concern over the option to smoke medical marijuana since the bill’s conception, and Executive Director of the Minnesota Chiefs of Police Association Andy Skoogman said the elimination of that provision garnered more of their support.

“What we’re hearing from other states is that the [medical] marijuana is getting in the wrong hands,” he said.

If Minnesota joins the 22 other states that have legalized medical marijuana, it would be the only one that doesn’t allow the drug to be smoked.

Some medical marijuana supporters say the recent changes make the legislation too weak to be effective.

Heather Azzi, political director at Minnesotans for Compassionate Care, a pro-medical marijuana group, said she wished the smoking option wasn’t omitted and law enforcement officials shouldn’t be speaking on the medicinal purposes of the drug. She said they should leave that up to health experts.

Other bill modifications include cutting out language that permitted patients to grow marijuana themselves and allowing just one state-based dispensary. Previous versions of the bill would have allowed up to 55 dispensaries.

Skoogman said having a large number of dispensaries would have created enforcement challenges.

“We think it would open up avenues of access for people that didn’t have it prescribed to them,” he said.

The randomized clinical trials, to be conducted on patients with conditions such as cancer, glaucoma, HIV-AIDS and epilepsy, would show whether medical marijuana is effective in treating those conditions.

State health commissioner Dr. Ed Ehlinger said at Friday’s hearing that he’s had “very preliminary” discussions with the University of Minnesota about hosting the trials.

But research would come at an extra cost for the state. The House bill calls for a total of $2.2 million for clinical trials over fiscal years 2016 and 2017.

In a recent press release, Gov. Mark Dayton said he wants legal counsel to “assess the potential liability to the state” if it sponsored the trials — another potential roadblock for the bill.

“I will need that information before making any decision,” he said in the release.

The legislation is on the fast-track at the Capitol because supporters are hoping to pass it before the legislative session ends at the end of the month.

Melin acknowledged that the bill is moving “unconventionally” fast after hearing criticism from some legislators on Friday that the bill is “skipping” through house committees, ultimately not getting the attention they say the issue deserves.

The House’s ways and means committee is set to hear the bill Monday, and full House and Senate votes are possible as early as this week.

If passed, medical marijuana identification cards would be available to qualifying patients by July 1, 2015.

“We need this in Minnesota,” said Angie Weaver, a Hibbing, Minn., native who said she wants her 8-year-old daughter to have access to medical marijuana to treat her seizure disorder.

“Amelia deserves this,” Weaver said. “Every seizure could be her last.”