The team will try to avoid its 10th loss in a row Wednesday at No. 21 Purdue. 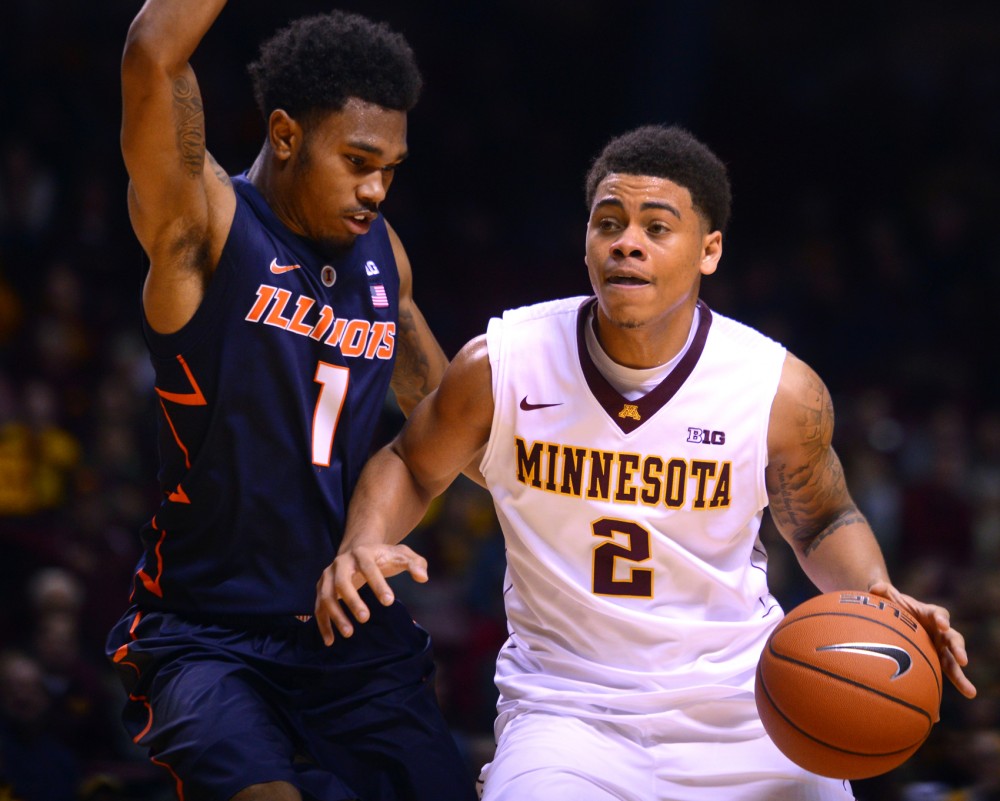 Gopher guard Nate Mason drives to the basket against Illinois guard Jaylon Tate Saturday night at Williams Arena where the Gophers were defeated 71-76 in overtime. Mason ended the game with 19 points, scoring 14 in the second half.

Ryan Falk
The Gophers are in the middle of one of the worst stretches in team history, and head coach Richard Pitino is bringing in outside help to re-inspire the team.
In the midst of a nine-game losing streak, it’s been more than a month since Minnesota has won a game, and this has made it a challenge for the team to keep its collective head high amid all the defeats.
“[Staying positive] is hard, but we’re just fighting every day in practice and looking forward to the next game to try and come out with a victory,” sophomore guard Nate Mason said ahead of the team’s loss to Indiana.
The Gophers’ (6-14, 0-8 Big Ten) current slide ties one the team had in the 2006-07 season, when Minnesota lost nine straight conference games including its Big Ten tournament opener.
Pitino has tried to bring in outside voices to deliver a fresh message to the team, but nothing seems to be sinking in yet.
His father Rick Pitino, a Naismith Memorial Basketball Hall of Fame head coach for the Louisville Cardinals, attended the Gophers’ loss to Indiana.
“I think when it’s a long season, it’s always good to get other voices,” Richard Pitino said after the Indiana loss. “We’re all saying the same thing. [When] you hear from somebody else, it’s always a good thing.”
Former Minnesota basketball player Richard Coffey, the father of Gophers commit Amir Coffey, also addressed the team on Jan. 18.
Richard Pitino said he has even considered bringing in sports psychologists to help the team out.
“It’s getting at the people locally [to help], as well as thinking about sports psychology things,” Richard Pitino said.
The pile of losses has not only caused frustration within the team but among fans as well, and the players have tried to block out some of the negativity with a Twitter ban.
The team also instituted a Twitter ban last year, when a senior-heavy team stumbled to a 6-12 record in conference and failed to make the NCAA or NIT tournament.
“[The fans] definitely get to certain people, but I feel like it gets to some of our guys,” Mason said. “We talked to [the freshmen] about it. They just got to block it out and keep playing. [The fans] will love you when you win.”
The Gophers are a much younger team this year, and it’s shown through mistakes and turnovers late in close games.
The team has still turned in solid efforts in Big Ten play even with no victories to show for it. The Gophers lost by single digits to No. 12 Michigan State and No. 19 Indiana at home, and they took Illinois into overtime last Saturday before losing.
“The good thing is that we’re playing good basketball,” senior forward Joey King said after the loss to Illinois. “The one thing we can’t do is just lose our confidence. We have to come out at the beginning of every game knowing that we have a chance to win.”
Delete Image
Align Left
Align Center
Align Right
Align Left
Align Center
Delete Heading