New studies help extend the lives of dogs with cancer

The College of Veterinary Medicine will begin a new trial this week. 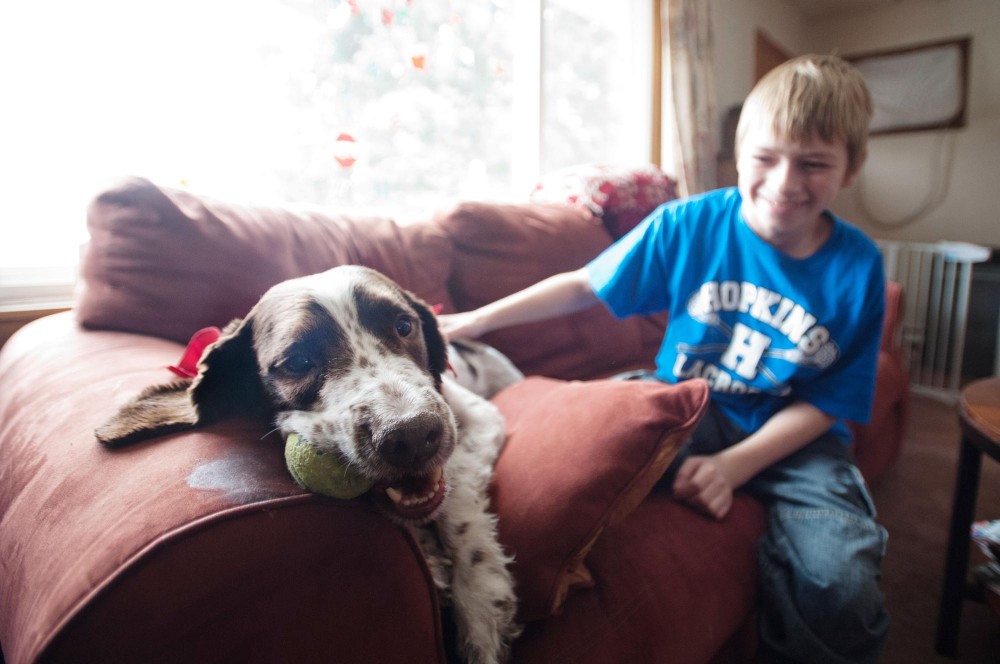 Luke enjoys playing with a tennis ball while his owner,Track Huston, sits beside him Saturday at home in Crystal, Minn. Luke, a 6-year-old English Springer Spaniel, was the first participant in a trial for dogs with lymphoma at the University of Minnesota’s College of Veterinary Medicine.

When Luke, the Huston familyâÄôs 6-year-old English Springer Spaniel, was diagnosed with lymphoma, their vet recommended a new trial at the University of MinnesotaâÄôs College of Veterinary Medicine.

Luke was the first participant in a trial for dogs with lymphoma, but heâÄôs one of many animal-companion owners bring to the University to contribute to research.

This week, the College of Veterinary Medicine will begin a new trial aimed at the latest treatment for dogs with osteosarcoma, a cancerous bone tumor.

Osteosarcoma often occurs in dogsâÄô front or hind legs, causing pain and bone destruction. It has high potential to spread to other parts of the body, said Antonella Borgatti, assistant professor of oncology and a researcher for the trial.

Catherine St. Hill, assistant professor of veterinary clinical science, said there are carbohydrates attached to cancer cells that make it easier for them to bind tightly to blood vessels âÄî their mode of transportation through the body.

The goal of her research is to discover a way to either prevent the making of the carbohydrate or slow the progression of the disease.

When dogs pass away from osteosarcoma, it is most commonly a result of spreading, Borgatti said.

The OSAL âÄî  osteosarcoma and salmonella âÄîtrial aims to stop the spread of cancer through amputation of the infected limb followed by chemotherapy and treatment using genetically modified salmonella designed to attack only the cancerous cells.

Kathy Stuebner, research coordinator for the UniversityâÄôs Clinical Investigation Center, said researchers will use PET-CT, a full body scan used to detect cancer and cancer spread.  It will be used on dogs for the first time before and after the treatment to help detect its effectiveness and identify proper treatment levels.

The goal for all their trials is to keep the dogs comfortable and prolong remission, she said.

Stuebner said the trial is âÄúapproved and ready to go.âÄù  They hope to start this week.

In the meantime, five other oncology trials are active.  The trial that Luke initiated, called âÄúLicking Lymphoma,âÄù is testing Valspodar, a study drug, which Borgatti said should decrease the resistance to chemotherapy.

Dogs with lymphoma âÄîcancer of the lymph nodes âÄî go through âÄústaging,âÄù or full body testing, with X-rays and biopsies to determine the stage of their cancer.  Generally, healthy dogs with âÄúB cellâÄù lymphoma are accepted for the study, Borgatti said.

The dogs are put into two groups, some are given Valspodar and others are given a placebo, for four days.  Then they all go through chemotherapy.

The Huston family got involved in the âÄúLicking LymphomaâÄù trial in April when they noticed their dog Luke had swollen lymph nodes in his neck.

Mike Huston, LukeâÄôs owner, said they took him to the vet thinking he was suffering from allergies.  After a blood test, they were told that Luke might have lymphoma.  Their vet said Luke might meet the criteria to be a participant in the UniversityâÄôs lymphoma trials.

Huston said they took Luke to the University to be tested and after a long discussion as a family they decided to apply for the trial.

After the treatment Huston said Luke went into remission for seven months.

Borgatti said that most dogs only go into remission for a few months, so in LukeâÄôs case, the trial was a success.

âÄúLuke never showed any signs of pain, even during treatment.  He still runs and plays ball, everything is the same,âÄù Huston said.

He added that the experience was much easier than he imagined because the veterinarians were very professional, yet personable.

âÄúIf he was going to get treatment, we decided we should do it there because the facility is the best and he could contribute to future research,âÄù he said.

All studies that are done in the CVM are approved by the Institutional Animal Care and Use Committee, who check for ethics and animal welfare, which comforts many pet owners, Stuebner said.

There is also a financial incentive for owners to help pay for the chemotherapy in the oncology trials.  The âÄúLicking LymphomaâÄù trial credits the owner $2,500 after he or she makes an initial payment before treatment.

âÄúItâÄôs a hard decision to make and most people wouldnâÄôt pay for treatment for their pet without financial incentive,âÄù Borgatti said.

There are free social services available to all clients who need extra support and help making a decision about what is best for them and their pet, she said.

She added that âÄúmost owners are happy that the trial is giving them an option.âÄù By participating in research, they get more personal attention than they would at a normal vet.

âÄúThe trials give us a chance to get to know the owners really well,âÄù Stuebner said.

Stuebner and Borgatti said the lymphoma trial has been going on for about six months and based on their expectations, they said they hope the study will be finished in six months to a year.

The trials being done for dogs in the CVM are unique because they hope the research will be used for humans with similar diseases in the future, Borgatti said.

LukeâÄôs lymphoma has returned, but like always, he still enjoys playing around with his family. The Hustons are working with the University to keep him comfortable as the disease progresses.