The students were concerned about proposed changes to the Student Conduct Code. 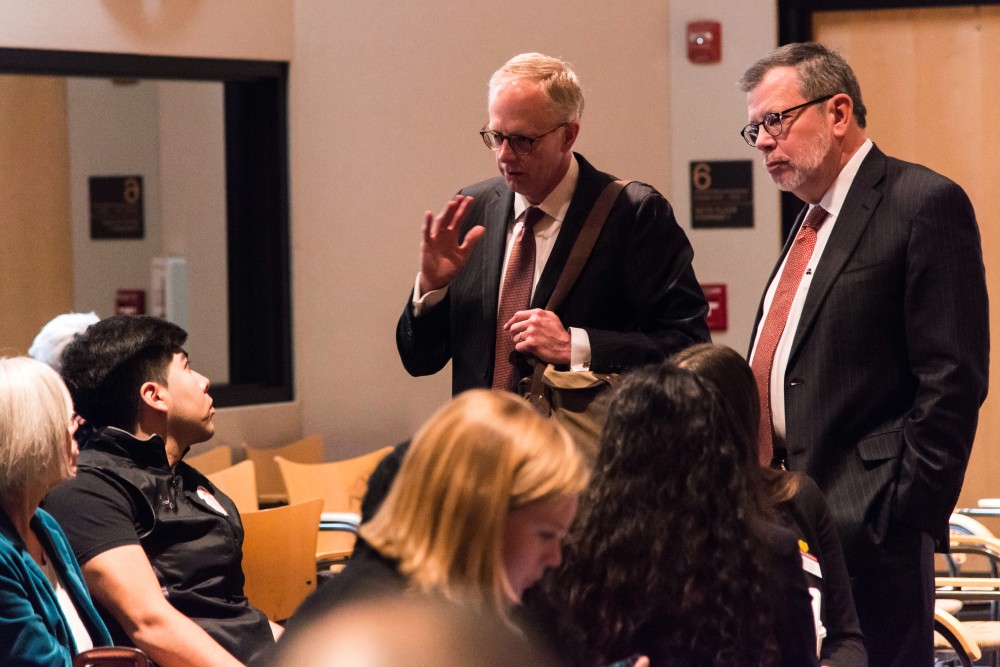 A group of students air grievances to University President Eric Kaler and Regent David McMillan during the Board of Regents meeting on Friday, Feb. 9. Their concerns stem from a possible change in the Student Conduct Code.

The University of Minnesota Board of Regents discussed a potential tuition increase, a new sexual misconduct initiative and institutional risks, among other topics, at its meetings Thursday and Friday.

A scheduled vote on the proposed student conduct code amendment was postponed amid criticism from some students and faculty.

Under the proposed document, student groups could be held liable for conduct they direct, sponsor or endorse that violates the University’s conduct code; or if a group’s officers don’t prevent misconduct during a group event. Students and faculty who attended the protest worry this change could make it easier for the administration to punish students who engage in “disruptive behavior” — like protests — on campus.

The current code defines “disruptive behavior” as a punishable offense that includes “participating in a campus demonstration that disrupts the normal operations of the University,” “engaging in intentional obstruction that interferes with freedom of movement … on campus,” and “using sound amplification equipment on campus without authorization.”

With about five minutes left in the Board of Regents meeting Friday, a group of around 25 students entered the hall asking for a public forum with the regents. Regent David McMillan and University President Eric Kaler stayed behind to talk with the group.

Students and faculty in the opposing group said the proposed amendment would “criminalize” student action.

Thursday night, a crowd of about 35 people gathered outside Coffman Union to voice their opposition to the proposed changes, which some worry could make it easier for the University to punish students for protesting.

At the meeting Friday, McMillan said the board won’t reconsider a change until “deepened and strong consultation” with stakeholders takes place. The board has not rescheduled a review of the proposed changes. During a discussion of the President’s Initiative to Prevent Sexual Misconduct, which was announced in May, regents voiced widespread support for the campaign, with many citing the current climate around sexual misconduct.

“Prevention of sexual misconduct and promotion of a culture that supports the health and welfare of all is an absolute necessity,” said Karen Miksch, associate professor and coordinator of Higher Education Programs for the Department of Organizational Leadership, Policy and Development, at the meeting.

The initiative was designed from a public health approach and aims to change the culture around sexual misconduct by requiring increased training for University faculty and staff, promoting “respectful cultures” in academic departments and developing awareness and educational campaigns.

“We live in a culture of sexual misconduct … and we here at the University are not immune from this epidemic,” Kaler said at the meeting Friday.

At the meeting, the board also reviewed institutional risks — areas involving legal compliance, or where the University’s reputation could be at risk.

Brian Dahlin, chief information security officer for the Office of Information Technology, said cyber risks are “inherent” for the University. Developments to protect the University from cyber attacks have been implemented, Dahlin said. Highlights include two-factor authentication and a network upgrade to increase the University’s ability to detect attacks.

Bernard Gulacheck, vice president and chief information officer for the Office of Information Technology, said something as simple as a phisher gaining access to a University email account can give them wider access.

“That’s what I lose sleep about,” he said.

The board approved a motion to purchase the Keeler Apartment Building, located a block from campus, from the Wedum Foundation for $12 million. The building will continue to be used for student housing and managed by the University’s Housing and Residential Life.

An approval by the board will move the wrestling practice facility to the first floor of the Bierman Field Athletic Building in the now-vacated basketball practice gymnasium. Anonymous, private donors funded the $26 million move. The new practice facility will house more than 7,000 square feet of mat area, a trainer room, a cardio room, coaches offices, a conference room and a recruiting space.

Correction: A previous version of this article mischaracterized a regents discussion. The board is not considering an additional 15 percent tuition increase for incoming nonresident, non-reciprocity freshman.