Consistency is a priority for Minnesota 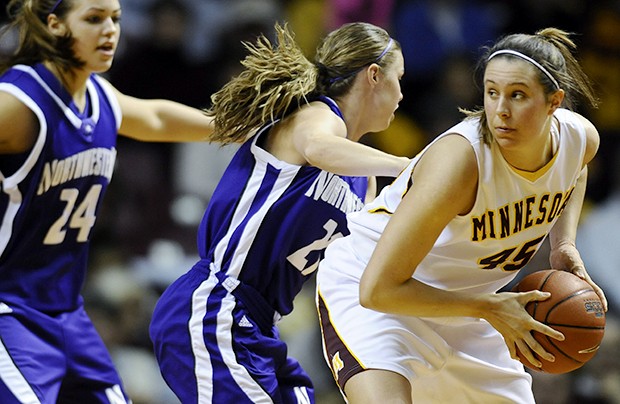 Half way through the Big Ten season, Minnesota posts a solid 6-3 mark in conference play with signature wins over the top two teams, Indiana and No. 13 Ohio State, on the road. But according to Gophers players and coaches, one thing has yet to be accomplished: consistency. Ending an eight-day break, Minnesota hosts Michigan State on Monday, one of the hottest teams in the Big Ten with a current six-game win streak. âÄúMichigan State is one of the top teams in the Big Ten,âÄù senior guard Emily Fox said. âÄúSo, to have that win at Ohio State, knowing we can beat the top teams in the Big Ten is to our advantage.âÄù While Minnesota already stopped the two longest winning streaks in the Big Ten this season âÄî Indiana [nine] and Ohio State [eight] âÄî the Gophers also realize they have struggled against some weaker opponents. A 74-57 loss at Iowa and two narrow wins against Michigan and Northwestern have shown some flaws in MinnesotaâÄôs team, which Gophers junior forward Ashley Ellis-Milan hopes to help the team improve in the second half of conference play. âÄúI think they [Michigan State] look at those wins and say, âÄòWow. They beat Indiana and Ohio State.âÄô âÄù Ellis-Milan said. âÄúBut then, they probably look at how we lost to Iowa by 25. So itâÄôs like, âÄòWhat Minnesota team are we going to get tonight?âÄô âÄù But Ellis-Milan said consistent play by Minnesota could solve a lot of their problems and help them improve for tournament time. âÄúWe have got to make sure we are bringing the same Minnesota team every night,âÄù she said. Junior guard Katie Ohm said playing consistent basketball will help the Gophers accomplish more of their second-half goals, which include winning the Big Ten, protecting the Barn and going on the road to get some wins there, too. âÄúI think we have been pretty up and down, pretty inconsistent,âÄù Ohm said. âÄúSo I think that should be one of our goals âÄî to be consistent every single game and every single practice. I think we will hit every one of our goals if we do that.âÄù In the Gophers last game, a 43-40 win over the Wildcats on Jan. 25, Minnesota coach Pam Borton noticed both consistent and inconsistent parts of her team. Borton points out that the Gophers defense has been consistent this season, holding Big Ten teams to 55 points per game , and also rebounding, leading the conference with 34 defensive rebounds per game. Offense, on the other hand, is one area where Borton is quick to find inconsistency on this yearâÄôs Gophers squad, sitting at ninth in the Big Ten in field goal percentage at 40 percent. âÄúWe just have to continue getting better,âÄù Borton said. âÄúWe are not playing our best basketball right now. I think if we continue to get a little bit better, weâÄôll be a better basketball team at the end of the season.âÄù While Minnesota has had to fight for close wins against lower ranking opponents, Borton believes it shows maturity and confidence to finish games well. âÄúWe havenâÄôt had that for four years in this program,âÄù Borton said. Ohm also sees the importance of how fighting back at the end of games will help the team down the road. âÄúWe can always grow from tough experiences and tough situations, and the last five minutes we have been doing well the past few games,âÄù Ohm said.