The guard’s game-winner was just his second made field goal of the night. 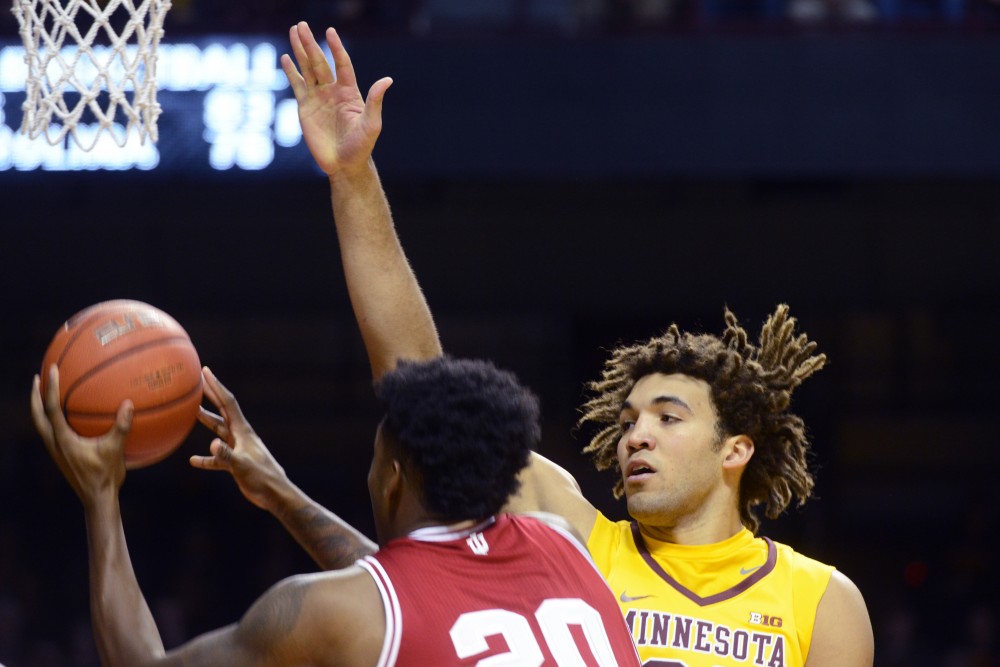 Springs missed a potentially game-winning 3-pointer for Minnesota, but got his own miss and laid it in to secure a 75-74 victory over Indiana.

“I told Akeem Springs: ‘when you’re [1-11], you better follow your shot, because you knew you were going to miss it,’” said head coach Richard Pitino. “It’s a great win.”

Springs got his shot back after forward Eric Curry tipped the ball back to him. Curry finished with three rebounds and zero points.

“Curry made the winning play,” Pitino said. “[Curry] was terrific on their bigs.”

Springs hit the last shot, but guard Nate Mason led the team in scoring. The junior had 30 points, one point shy of a career best, and added four assists.

Mason said his cousin came to town for the game, and the two haven’t seen each other in three or four years.

“I wanted to play well for him,” Mason said. “I guess it was a little good luck charm.”

Power forward Jordan Murphy hit both his free throws to help the Gophers take the lead with 1:06 remaining in the game.

“[Murphy] told me he was shaking,” Pitino said.

Murphy continued his success as of late and finished with his third consecutive double-double. He scored 14 points and grabbed 15 boards.

Indiana’s Thomas Bryant made a nice shot with 49 seconds left in the game, but the Gophers came right back with a lay-in from Mason.

On Indiana’s next possession, it went right back to Bryant. The Hosiers’ center drew the foul and made both his free throws at the line to help Indiana take the 74-73 lead.

Springs hit his shot, and Indiana’s James Blackmon Jr. put up a last-second heave from beyond the arc. The shot went off the rim as Williams Arena roared.

Center Reggie Lynch fouled out of the game for the eighth time this season. Lynch finished with six points and seven rebounds in 20 minutes.

“Throughout the foul trouble issue we had with the bigs, we just got to keep battling, keep boxing out,” Murphy said.

The Hoosiers also struggled to stay out of foul trouble. Indiana’s Josh Newkirk and De’Ron Davis both amassed double-digit point totals before fouling out of the game.

Guard Amir Coffey struggled in the first half, going 0-3 with zero points. Coffey sparked a scoring surge when he made his first two shots of the second half. The freshman finished with 17 points on 6-10 shooting.

Springs is the team’s leading 3-point shooter, but he went 0-6 from beyond the arc.

Although Bryant scored the last four points of regulation for the Hoosiers, he was held to just eight points in the game. He came into the matchup averaging 13.3 per game.

Pitino picked up a technical foul less than two minutes into the first half. The coach said he was actually yelling at Lynch instead of the referee.

Minnesota stays at home for its next game against Michigan on Sunday, Feb. 19 at Williams Arena at 6 p.m.

“Obviously great win for our guys, should be proud of them,” Pitino said. “These guys have been a lot of fun to be around.”