Junior pitcher Sara Groenewegen won two games and had a save in the series. 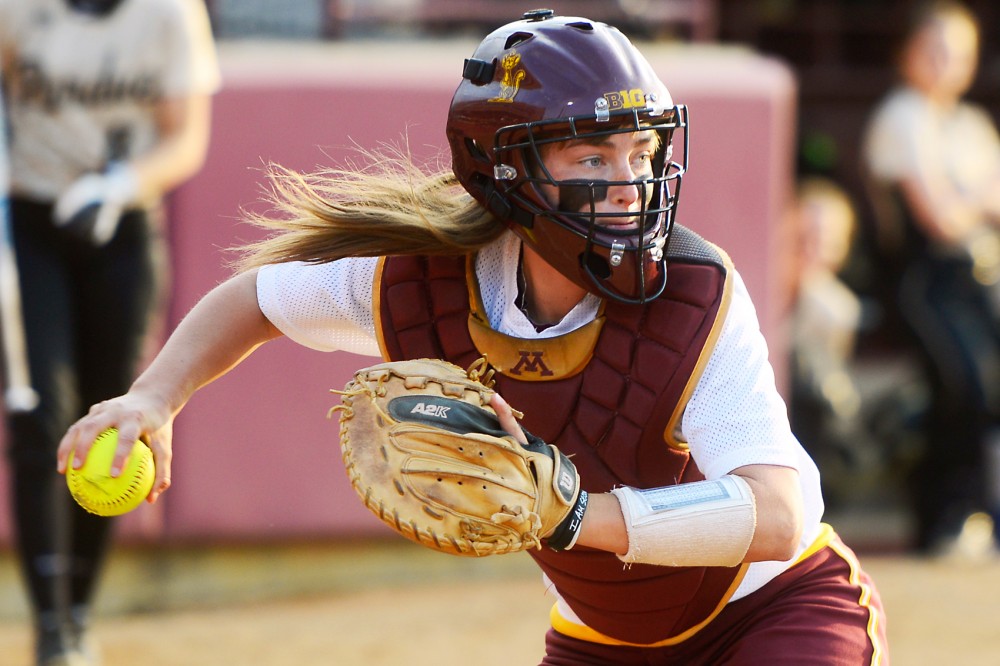 Minnesota catcher Taylor LeMay winds up to throw the ball at the Jane Sage Cowles Stadium on May 1, 2015.

Emily Polglaze
The Gophers opened up Big Ten play with their first series sweep of the season.
Minnesota won three games in West Lafayette, Ind., against Purdue over the weekend, starting with a 5-0 shutout on Friday. The Gophers then added a 4-1 victory on Saturday and a 4-3 victory on Sunday.
“Any time you can come away with a sweep, especially on someone else’s home field, that’s a great day,” head coach Jessica Allister said. “We’re really happy to open the [Big Ten] season on a good note.”
No. 22 Minnesota (22-9, 3-0 Big Ten) and Purdue held each other scoreless through four innings on Friday, with the Gophers leaving five batters on base in the third and fourth.
Senior catcher Taylor LeMay recorded an RBI single in the fifth inning to put Minnesota on the board, and freshman Maddie Houlihan and junior Sara Groenewegen followed with singles of their own to make it 3-0.
That lead was all Groenewegen would need in the circle, as she held the Boilermakers hitless in the final three innings.
She allowed only four hits the entire game while issuing two walks and striking out 13.
The Gophers scored more quickly on Saturday, as senior Paige Palkovich hit a two-RBI double in the second inning to give her team a 2-0 lead.
Purdue cut its deficit to one after scoring on back-to-back Minnesota errors in the fourth inning but failed to score again.
The Gophers added two more runs in the fifth inning with an RBI double from senior Sydney Fabian, and Minnesota won 4-1.
Groenewegen did not allow an earned run for the second consecutive game and gave up two hits while striking out six.
“I think it was a combination of things,” Palkovich said. “Obviously, it starts with pitching, and Sara [Groenewegen] was completely unhittable in those games. When we have great pitching and some really good defense behind her, it’s going to be really hard to score runs on us.”
The Boilermakers provided a better fight on Sunday. Groenewegen hit a home run in the second inning, but Purdue capitalized on Minnesota errors to score two runs in the bottom of the inning and take its first lead of the series.
The Gophers answered back with three runs in the third inning off of an RBI single from Houlihan and another single from senior Kayla Wenner that scored two.
The Boilermakers scored on a ground out in the fifth inning to reduce the deficit to one, causing Minnesota to turn to Groenewegen to close out the game.
She allowed no hits and struck out five in two innings, earning the save and securing a series sweep for the Gophers.
“We swept a very good team, and we did it against some very good pitchers, which is a big confidence booster,” LeMay said. “We’ve done well. We’ve done some things right. And if we can keep this energy and generate offense like we did against Purdue, we’ll be able to do that against anyone.”
Delete Image
Align Left
Align Center
Align Right
Align Left
Align Center
Delete Heading