Minnesota fought out of its slump with a career night from Austin Hollins. 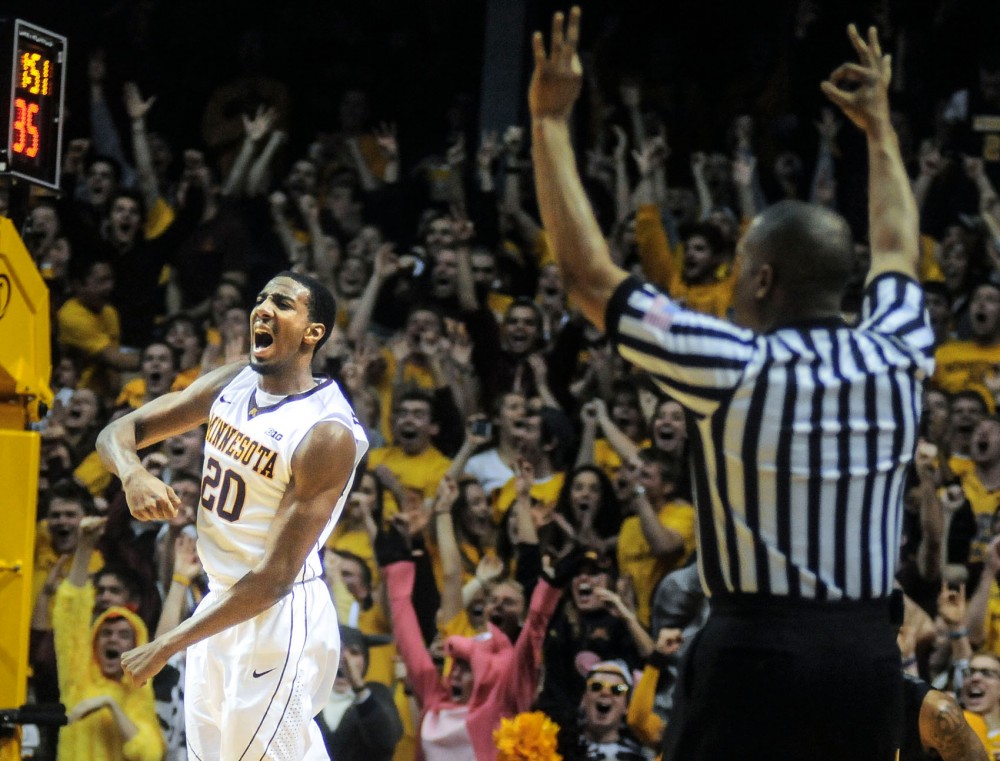 The Gophers were on the ropes — to say the least.

Minnesota (18-11, 7-9) had lost two straight and was sitting on the wrong side of the NCAA tournament bubble.

The offense stunk and hadn’t reached the 50-point mark in either of their last two contests.

Austin Hollins was in the worst slump of his career and had scored in double-digits just once in his last five games.

None of that mattered Tuesday night. Hollins poured in a career-high 27 points, and the Gophers knocked off No. 20 Iowa 95-89 at Williams Arena.

“To come back and get a win against a top-25 Iowa team was huge for us,” Hollins said. “That really helps our confidence.”

It was Hollins’ confidence that needed a boost. He hadn’t been able to buy a bucket of late.

“You can’t let that stuff get to you; you’ve got to keep working,” Hollins said. “Eventually, it’s going to pay off.”

It did on Tuesday as he went 8-for-10 from the field — 4-for-6 from deep. He continued to drain jumper after jumper and said the hoop started to look a little bigger as the game went along.

“It does get a little bigger,” he said. “You feel like you can make [shots] when you start knocking down shots.”

Hollins led an offensive attack that tallied the Gophers’ highest non-vacated Big Ten point total since 1993. Minnesota shot 61 percent from the field and 58 percent from beyond the arc.

“I think it was just our mentality,” junior guard Andre Hollins said. “We came out aggressive. … We came back, kept it going and fought.”

And there he was, perched at the end, waiting in the wings — the 6-foot-9-inch wiry freshman forward.

There was the Gophers solution; there was Charles Buggs.

Buggs came off the bench and scored 11 of 13 points in the first half. He hit three triples — each boosting Pitino’s smile and boosting the freshman’s confidence.

“He was a huge spark,” junior guard DeAndre Mathieu said. “When we were struggling to score, he was making big shots. He played probably the best game of his career.”

Buggs sparked the 30-9 first-half run that catapulted the Gophers to a 51-47 lead at the half.

“[I was] waiting, waiting [to use him],” Pitino joked after the game. “He can do some things that you’re going to go, ‘Wow.’ And he showed you tonight.

“He hasn’t played all year, and then he comes in and hits three threes. That’s him.”

In the second half, it was more of Austin Hollins, with a heavy dose of Mathieu kicked in for good measure.

Mathieu, who had struggled with trapping defenses, made the adjustment against the Hawkeyes.

He scored 19 points and tacked on seven assists in the victory, while turning the ball over just once.

“He was tremendous. That was one of his best games,” Pitino said. “He really controlled the game and gave us a lot of confidence.”

The Hawkeyes made a late push to cut the Gophers’ lead to 85-82 with less than a minute to play, prompting flashbacks of previous collapses.

Mathieu, though, said that wasn’t on the minds of the Gophers. And it showed.

The win almost certainly moves the Gophers to the right side of the NCAA tournament bubble. Still, with two games and the Big Ten tournament left, there’s a lot of work to be done.

“We know that the season’s not over,” Andre Hollins said. “We have some more opportunities left.”

Jack Satzinger contributed to this report.