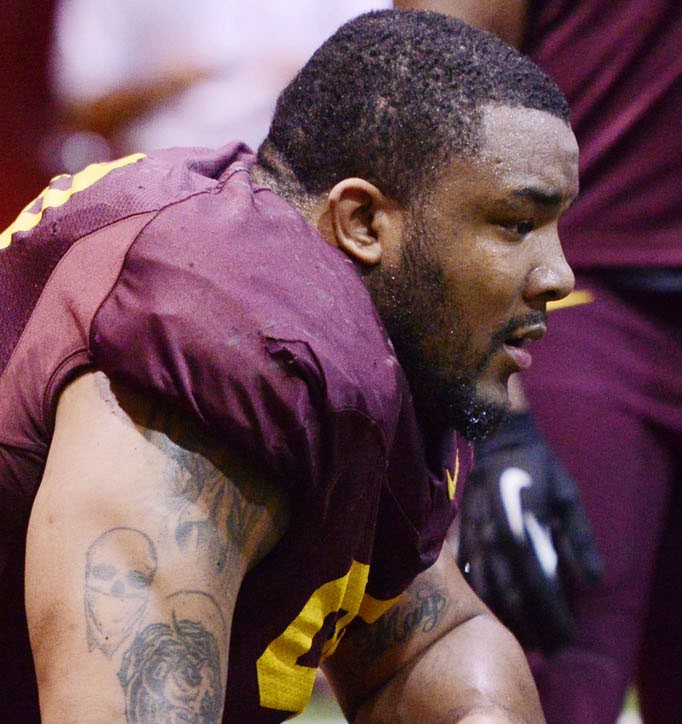 He stands at 6 feet, 6 inches and weighs 311 pounds. He draws double teams from opposing defenses because of his strength and physicality. His coaches and teammates say a career in the National Football League awaits him.

But he’s not focusing on his future.

“I try to stay out of the hype,” Hageman said. “I kind of surround myself with just my teammates.”

After a turbulent childhood and a rocky start to his Gophers’ career, Hageman is the unquestioned leader of the Minnesota defense heading into the 2013 season.

He has impressed his coaches during spring practice with his strength and focus. Hageman delivered the early highlight of spring ball, pancaking 288-pound offensive lineman Joe Bjorklund in a linemen drill.

Two years ago, Hageman was a second-team defensive lineman whose academic struggles got him a three-game suspension from interim head coach Jeff Horton.

When the Gophers hired Jerry Kill as head coach in December 2010, Hageman wasn’t sure Kill would keep him on the team.

But Kill gave him the opportunity he needed. Hageman has since developed into a force in the middle of the Gophers’ defense, commanding double teams and giving his teammates opportunities to make plays.

“For what he’s done in his life to get where he’s at now, credit his high school coach, credit his family that he’s with and credit Ra’Shede for wanting to change and be an impact,” Kill said.

Sweat soaking through his triple-XL jersey, Hageman stands away from the other defensive linemen, hands on his massive hips. When the drill resumes, he channels his energy and past frustrations into the offensive lineman in front of him.

“I’m the type to just bear my emotions and leave it on the field,” Hageman said. “That’s why I’m so physical and so angry on the field.”

That anger stemmed from a turbulent childhood.

Born in 1990 in Lansing, Mich., Hageman never knew his father. His mother struggled to care for him and his younger brother, Xavier. She put the boys in foster care, where Ra’Shede struggled with anger issues.

Ra’Shede and Xavier went through 12 foster homes in their early years, but they found a permanent home in 1998.

That year, Eric Hageman and Jill Coyle, a pair of Minneapolis lawyers, were looking to adopt. They came across a video made by Ra’Shede and Xavier’s social worker and decided to adopt the boys.

Hageman and Coyle gave the boys a stable home — and Ra’Shede a chance to play organized sports.

“He was always extremely athletic and was always very big for his age, too,” Eric Hageman said. “So in combination, it was pretty clear that he was a special talent and had some abilities that most kids never have.”

Though happy to be in a stable home, Ra’Shede said kids looked at him differently because he had white parents.

He also struggled to fit in, especially in his freshman and sophomore years of high school.

In that time, he turned to sports.

“It wasn’t popular to focus on school,” Hageman said, adding that many of his Washburn High School classmates joined gangs instead. “Doing some type of after-school program kept me focused and out of trouble.”

Hageman was one of the top-ranked high school tight ends in the nation and was also a highly touted basketball recruit. But he decided to pursue collegiate football.

Hageman received football scholarship offers from top schools such as Florida and Ohio State, both of which had won national championships in the past 10 years at the time.

Despite the offers from prestigious programs, he chose to stay near home.

“He really knew at that time that he needed to be close to home so he could mature,” said Giovan Jenkins, Hageman’s football coach at Washburn.

Hageman lines up in a three-point stance and stares at the offensive guard across from him. Offensive coordinator Matt Limegrover blows his whistle, and Hageman explodes off the line.

The guard blocks his way. Hageman tries to go left but is pushed further outside. “There’s no [expletive] room here!” he yells loud enough for everyone to hear.

Hageman is still learning the nuances of defensive tackle, a position he started just two years ago. He said he is working on improving his strength and explosiveness this spring.

That offseason, the newly hired Kill sat down with Hageman to discuss his future on the team.

Since his talk with Kill, Hageman has focused more on school and football, though he has gotten in trouble with coaches for two off-the-field incidents.

In the summer of 2011, Hageman got a citation for throwing a “party that was out of control,” he said.

He went incident-free through the 2011 season and played in all 12 games.

But Hageman had another incident last summer. He was arrested at Sally’s Saloon & Eatery last May after trying to break up a fight between his teammates and high school friends. He was charged with disorderly conduct, but the charge was later dropped.

“I got caught in the action,” Hageman said. “Just me being the biggest one out there, the police grabbed me and started asking me questions and whatnot.”

After the incident, Hageman focused more on school and football and also broke off relationships with some of his high school friends.

That decision led to a successful 2012 campaign.

Hageman recorded three sacks and a forced fumble in his first four games last season, all Gophers wins. He contributed more modestly during the Big Ten season and finished with 35 tackles and six sacks, which earned him honorable mention all-Big Ten Honors.

This offseason, coaches say Hageman has been locked in.

“He’s comfortable, he’s not thinking, he’s strong,” Kill said after an early spring practice. “This is the most focused I’ve seen Ra’Shede since I’ve been here.”

Hageman sits out the next few plays while Phelps gives him coaching. He eventually jumps back in.

This time around, he wins.

He gets around the offensive lineman and into the backfield. But he doesn’t show any emotion. He runs back to the defensive line and gets ready for the next play.

Hageman will graduate this summer with a bachelor’s degree in youth studies though he’ll still be with the Gophers for his senior season. He said after his football career ends, he’d like to become a firefighter.

“I don’t ever want to be behind a desk doing paperwork and falling asleep,” he said. “I want to do something active.”

But for now, he’s focused on football.

“He’s going to keep getting better,” Kill said. “He stays healthy and continues to do what he needs to do in school and all those other things, he’s untapped.”