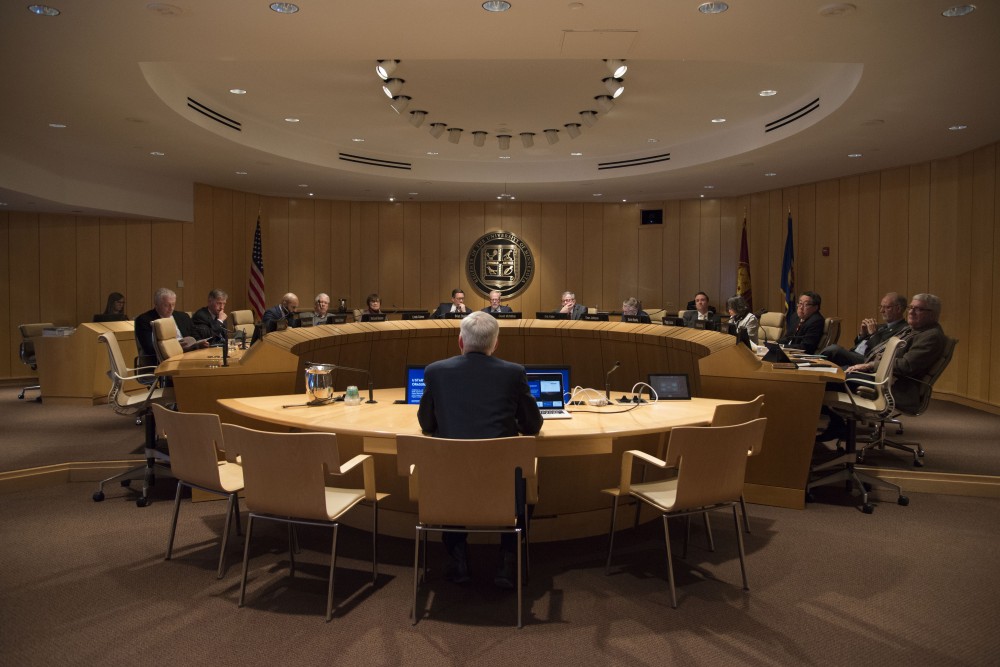 The University's Board of Regents convene at the McNamara Alumni Center on Friday, Feb. 8, 2019.

Ahead of lawmakers’ regent candidate recommendations, officials have stressed the importance of keeping the process nonpartisan.

At a joint meeting of the House and Senate higher education committees Monday, legislators will recommend candidates for the University of Minnesota’s Board of Regents. Legislators, council members and regents said despite past controversies surrounding regent selection, lawmakers need to work with the Regent Candidate Advisory Council to prevent the election process from becoming political.

“There are people that are strongly pushing certain candidates because of their backgrounds,” Wolter said. “There’s various interests that want certain candidates for very logical reasons. So that’s always surrounding the process that we have.”

A special regent selection for former Regent Patricia Simmons’ seat last year led to the election of Regent Randy Simonson. During the election process, a fellowship at the Medical School for reproductive health care training that included abortion procedures, came to light at the Capitol.

Simonson took a strong position against all abortion and stem cell research at the University in a candidate interview. RCAC was not involved in the special election.

Sen. Jim Abeler, R-Anoka, who voted for a different candidate, told the Minnesota Daily in 2018 this position helped Simonson gain support from Republicans.

Despite political controversies in past election, Wolter said this year’s process has demonstrated a bipartisan approach.

“They were very, very engaged and involved in the process this year, and I think they understand the level of work,” Wolter said. “There’s enough that goes into the process that I think it’s difficult to just throw it all on committee staff in the legislature.”

Rep. Lyndon Carlson, DFL-Minneapolis, was one of the chief authors of legislation establishing RCAC in 1988. He said the council was intended to take politics out of the selection process.

But Regent Darrin Rosha said the process is still political for candidates. Rosha said he’s spoken to qualified people who are interested in becoming a regent but are deterred by the politics of the process.

“The fact that this is a multi-tiered process and they don’t know what the politics of the council are … they’re not interested in going through that gauntlet,” Rosha said. “I’ve had people tell me that outright.”

Abeler said the only political issue he foresees this election is whether or not the joint committee recommends Regent Abdul Omari for an at-large seat. Despite his tenure on the board, the current student regent was not recommended by RCAC this cycle.