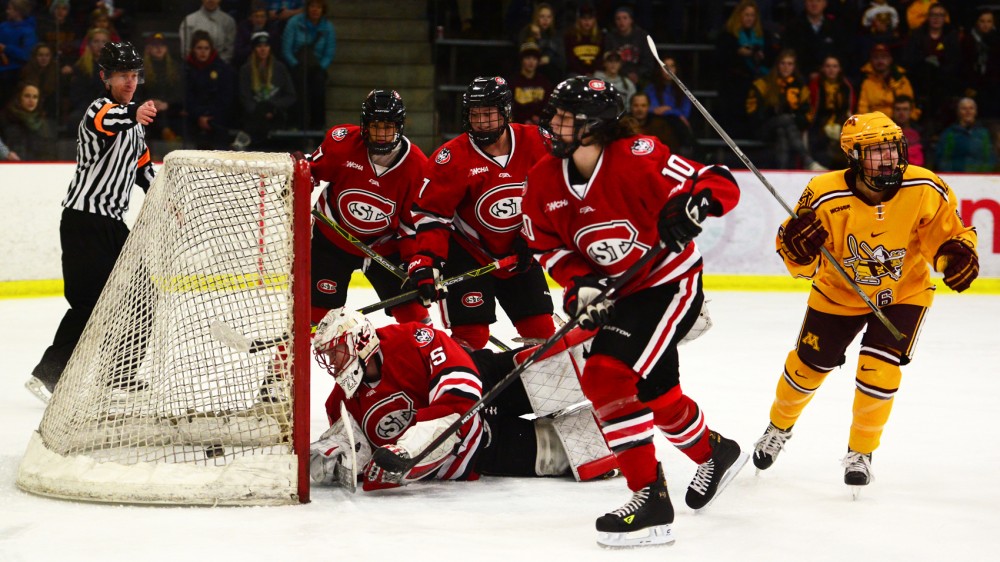 by Emily Polglaze
The Gophers followed up a rough weekend in conference play by defeating St. Cloud State 7-0 during Friday’s U.S. Hockey Hall of Fame Museum game at Roseville Ice Arena.
Wisconsin swept the Gophers the weekend before, but the victory on Friday allowed the team to close out the first half of the regular season with a 16-3-0 record.
“I think our team played really well,” head coach Brad Frost said. “Getting the lead with three in the first and being able to extend the lead with three more in the second was big for us.”
The Gophers and Huskies took part in the Hall of Fame game for the second straight season after Minnesota’s 5-0 victory last year in Edina, Minn.
The game was moved to Roseville, Minn., this year because each team has a former Raiders skater.
Junior defenseman Lee Stecklein for Minnesota and senior forward Hanna Brodt for St. Cloud State both played for Roseville in high school.
The two both took part in a ceremonial puck drop before the game that honored Raiders and Gophers alums Winny Brodt Brown, Ronda Curtin Engelhardt, Chelsey Brodt-Rosenthal, Bethany Brausen and Kate Flug.
Once the ceremony was over, No. 3 Minnesota dominated the game for the second year in a row. Junior forward Kate Schipper put the Gophers on the scoreboard 8:56 into the game with a goal right in front of the net.
Senior captain Hannah Brandt scored nine minutes later, and on the very next shift Schipper scored another goal to put the Gophers up 3-0 after the first period.
The two goals tied Schipper’s career high for her most in a game, and both came in the first 20 minutes. Her line had four points in the first period after only scoring two all of last weekend in Wisconsin.
“At Wisconsin we didn’t play as well as we could’ve, both as a team and on my line,” Schipper said. “So it was nice to come out strong in the final game of the first half.”
The Gophers scored three more goals in the second period to turn the game into a blowout.
Senior defenseman Milica McMillen scored halfway through the period on the power play, and sophomore forward Nina Rodgers added another goal just 29 seconds later.
Junior forward Dani Cameranesi found the back of the net in the last minutes of the second period to bring the score to 6-0.
The third period featured a lot less action for both teams, though junior defenseman Kelsey Cline scored her first goal of the season for the Gophers on the power play.
Cline also had an assist earlier in the evening, making her one of seven Gophers to have a multi-point night.
Senior goaltender Amanda Leveille had 12 saves in the shutout, and the Gophers outshot the Huskies 32-12.
Minnesota now has a four-week break before getting back into regular season and conference play with Ohio State.
“After this, we feel really good and have some confidence,” Cline said. “There’s a lot of good energy and a lot of positive things to bring.”
Delete Image
Align Left
Align Center
Align Right
Align Left
Align Center
Delete Heading