From tragedy to forgiveness

Jessica Dickey performs her one-woman show, “The Amish Project,” in the Dowling Studio. 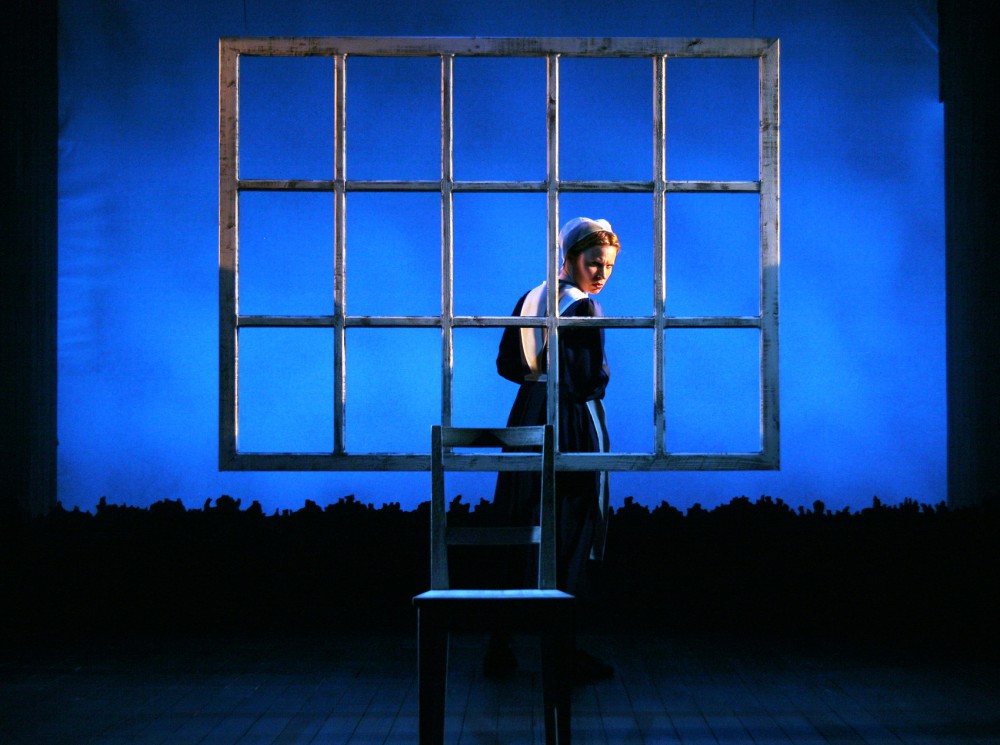 Danylo Loutchko
On Oct. 2, 2006, a gunman entered a one-room Amish schoolhouse in Nickel Mines, Penn., and shot 11 children, killing five girls, before turning the gun on himself.
Creating a piece of theatre is not most people’s reaction to a horrific tragedy, but Jessica Dickey responded to this one by crafting “The Amish Project.”
“The Amish Project,” written and performed by Dickey, creates a mostly fictional account of the Nickel Mines shooting through the lens of multiple characters, all of whom Dickey portrays.
The show, which has been touring all across the country, will be at the Guthrie’s Dowling Studio from Tuesday to Feb. 14.
“I think ‘The Amish Project’ is looking at what made [the Nickel Mines shooting] different than all the other school shootings,” said Dickey, who grew up less than two hours south of Nickel Mines.
“The Amish embraced the gunman vis-a-vis his family as fellow victims of the crime. They forgave him by embracing his family and expressed their condolences,” Dickey said. “It switched the national dialogue about this crime from being another gruesome shooting to this bizarre, mysterious exchange between the Amish and the gunman’s
family that was about forgiveness and redemption.”
“The Amish Project” explores these themes of humanity and forgiveness in the face of death and tragedy.
Since it’s a one-woman show, Dickey acts out all of the characters one by one: the victims of the shooting, their families and even the gunman himself. It is important to note, however, that the play remains a work of fiction.
“I took a real crime, but I fictionalized the characters,” Dickey said. “That was in part because I had no desire — none at all — to ask any more of the people who had already been through this unbearable tragedy. But I did feel compelled to spend more time thinking about these things and these subjects and these themes, but not necessarily at the expense and cost of the people who went through it.”
The process of writing “The Amish Project” started in 2008, when Dickey was working as a professional actor and wanted to write a play.
It’s her first play, and Dickey has since made playwriting a component of her career.
Despite being written eight years ago, “The Amish Project” still remains relevant today.
“I wish [‘The Amish Project’] were just this period piece [about] when we went through a couple bad years in America,” said Dickey. “But, unfortunately, this kind of thing keeps happening, and it’s sparked some really contentious and important debates in our country. … [Shootings are] one of these events that force us to look at ourselves culturally and ask what is happening.”
To facilitate this cultural dialogue, Dickey has worked with the Guthrie to have an artist Q&A and talk-back after every performance of “The Amish Project.”
“In all my experiences of performing it around the country, people want to stay and talk,” said Dickey. “I hope they do — I’m always really interested in hearing how the play strikes an audience now at this time and in this place. [‘The Amish Project’] is a piece that shifts as the culture that’s seeing it
shifts.”
“The Amish Project”
Where The Guthrie Theater, 818 S. Second St., Minneapolis
When Tuesday–Feb. 14
Cost $15-35
Delete Image
Align Left
Align Center
Align Right
Align Left
Align Center
Delete Heading