Woody and crew ride off into the sunset. 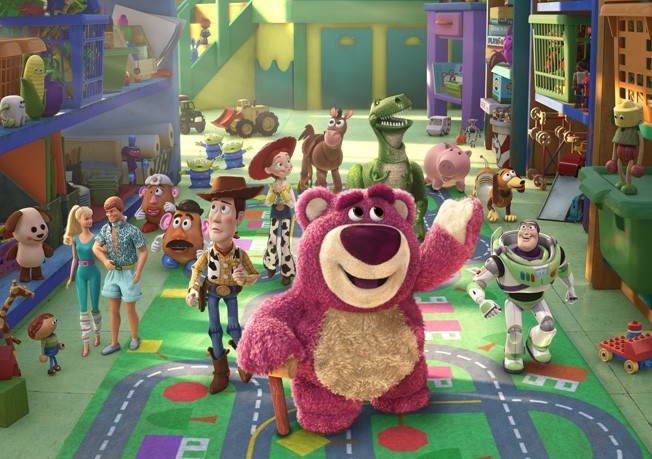 In 1995 , Pixar Studios released âÄúToy Story,âÄù the first wholly computer-generated feature film, and thereby revolutionized animated cinema. In the 15 years since, computer-generated imagery, or CGI, has become the standard for kidsâÄô movies, if not old-hat. But Pixar continues to distinguish itself from contemporaries by focusing on dynamic characters and carefully planned story progression, never once producing a flop. âÄúToy Story 3âÄù continues PixarâÄôs unparalleled awesome streak, and while audiences may no longer be dazzled solely by CGI, theyâÄôll still be drawn to the now-classic characters and their poignant new adventure. The third installment picks up well after the second left off, with a teenage Andy headed for college. His toys havenâÄôt been played with in many years, and when his mother tells him to clean out his room, Andy is forced to either put the old toys in the attic or give them to a daycare center. He chooses the former, deciding heâÄôll take Woody to school. But his mother mistakes the bag of attic-bound toys for garbage and tosses it on the curb. The toys, thinking AndyâÄôs thrown them out, decide to travel to the daycare where theyâÄôll actually get some playtime. Woody canâÄôt accept that and makes it his mission to bring them back. When the gang arrives, they think theyâÄôve stumbled into a plastic Eden, where the toys are all friendly and the kids always want to play. TheyâÄôre given the grand tour by Lots-OâÄô-HugginâÄô Bear , the veritable mayor of toy town, and Woody, realizing the attic canâÄôt compete, gives up and heads for home. Buzz and company settle in, but the seedy underbelly of the daycare quickly comes to light. The opening of the film covers emotional terrain similar to that of its predecessor, focusing on issues of loyalty, neglect and disposal. Similarly, we have attempts to bring reluctant toys back to Andy and we have a two-faced antagonist in Lotso , all of which make these early scenes feel a little too familiar in both tone and plot. Fortunately, the initial staleness quickly gives way, and weâÄôre treated to both great comedy and genuine pathos. âÄúToy Story 3âÄù uses plenty of clichÃ©s and classic film tropes, which generally play well in comedic films, but can feel trite when used as the foundation for plot points. The producers perform a difficult trick in regard to the latter, using those same elements for moving drama. WeâÄôre not surprised by much of what happens: our heroes show their virtue even when they shouldnâÄôt, redemption is attained by one simple act and villains always get their just desserts âÄî yet somehow it doesnâÄôt feel contrived. Any would-be cynicism is wiped away by deft execution and undeniably cathartic events. Furthermore, points of surprise are highlighted by their juxtaposition with clichÃ©. This means the moments of novelty donâÄôt just prod with a tiny shock; they completely floor us. If the beginning of the film lags in spots, the end certainly makes up for it. ItâÄôs joyous, heart-wrenching and full of all the pure human emotion that makes Pixar movies appealing to both young and old. Simply put, it is a flawless ending âÄî the perfect way to say goodbye to the characters we grew up loving. 3/4 Stars