The senior finished with 69 tackles last year, ranking fourth on the team. 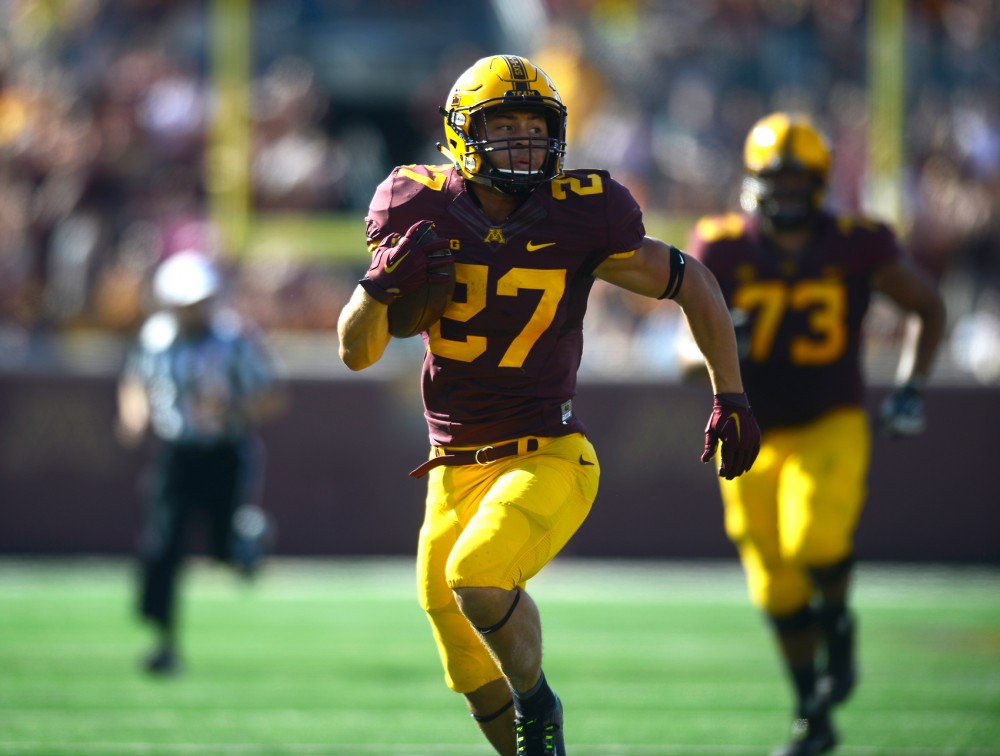 Minnesota defensive back Eric Murray gives a thumbs up moments before a play on Sept. 3 at TCF Bank Stadium where the Gophers faced TCU.

Ryan Falk
The Gopher’s secondary will look different heading into the game at Northwestern University this weekend, as last Saturday’s game against Ohio University took its toll on the team.
Redshirt senior cornerback Briean Boddy-Calhoun left the game in the third quarter with a knee injury, and his return is questionable for this Saturday’sgame against Northwestern.
A lack of healthy defensive backs presents a problem as they go up against Northwestern’s dual-threat quarterback Clayton Thorson, who has already amassed 724 yards and 6 touchdowns.
Boddy-Calhoun’s injury, along with those of senior safeties Antonio Johnson and Damarius Travis, leaves the younger players to step up.
Head coach Jerry Kill said much of the secondary’s status is uncertain for this Saturday’s game except for one major exception, senior cornerback Eric Murray.
Murray has been a model of consistency during his time in maroon and gold, and that consistency will be necessary Saturday against Northwestern with less-experienced players on the field.
Kill said he doesn’t have to worry about the young kids with veteran leaders like Murray on the field.
“Eric’s one of the leaders of our team,” Kill said, “so that part I don’t have to worry about.”
Murray has been a tackling machine since his sophomore year, recording 52 tackles that year and 69 in his junior season, which was fourth most on the team.
With so many of his teammates injured, Murray knows both he and the young players have to play their game to be successful.
“I control myself, and they control [themselves] — that’s all you can do,” Murray said.
Murray isn’t known to be a very talkative person, but talking is what Murray will need to do this weekend to help out the less experienced players.
Defensive coordinator Tracy Claeys stressed the need for better communication.
All the new faces don’t bother Murray, who had nothing but praise for the young players after last Saturday’s game against Ohio.
“I was proud of all the young guys,” Murray said. “It was the next-man-up mentality, and that’s something we preach.”
Murray added that the Ohio game was good for the defense, despite the injuries.
“It was good for our defense as a whole to know that we don’t need the best players on the team,” Murray said.
Murray said he knows this game can be good for the younger players because not that long ago, older players counted on him to come in and perform.
He said he will have to be a teacher to the young players to help them succeed Saturday.
“Just giving them some words of wisdom and my past experiences, and hopefully they learn from it,” Murray said.
Delete Image
Align Left
Align Center
Align Right
Align Left
Align Center
Delete Heading