Minnesota led by as many as 15 in the second half. 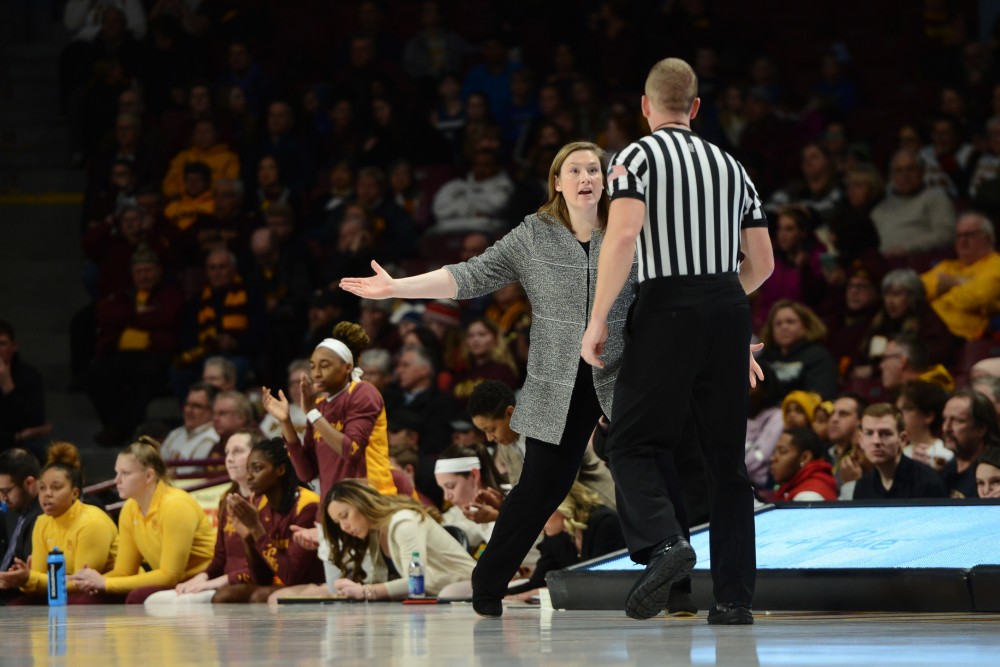 Coach Lindsay Whalen questions the referee's call during the game against Purdue on Thursday, Jan. 24.

After losing its scoring leader hours before tipoff Thursday, the Minnesota women’s basketball team held a 15-point lead over Iowa only to let it slip away as the Gophers lost 76-75 at Williams Arena.

Many questions surrounded the Gophers coming into the game with the news of junior forward Destiny Pitts entering the transfer portal. But led by a balanced scoring attack, Minnesota opened up the game with an 11-4 run. Guards Gadiva Hubbard and Sara Scalia stepped up and powered the offense with 11 and 10 points respectively in the first half.

Even when Pitts was in the lineup, Minnesota struggled to score points early in games. However, the Gophers were able to close out the first half with another run to take a 43-35 lead into the locker room.

The last time the Gophers scored 40 or more points in the first half of a game was Dec. 28 against Penn State.

With a little more than three minutes to play in the third quarter, the Gophers held a 15-point lead, their largest of the night, thanks to strong quarters by Scalia and senior guard Jasmine Brunson.

Then the Gophers saw their lead evaporate. After shooting 45.1% from the floor in the first three quarters of play, Minnesota went cold in the fourth quarter, only making four field goals and shooting 23.5%.

After trailing by nine coming out of the final media timeout, Iowa clawed its way back to take a 76-74 lead with eight seconds left off a 3-point make from Alexis Sevillian.

Hubbard had a chance to tie the game after being fouled with 0.7 seconds left, but missed the first free throw which essentially sealed the victory for Iowa.

Questions about whether Taiye or Kehinde Bello would play in Thursday’s contest also arose after they did not travel with the team to play Illinois last weekend. In Pitts’ Twitter post, she thanked the Bellos for sitting out against Illinois to protest Pitts’ suspension. Neither played in the first half, but Taiye Bello entered the game midway through the third quarter, scoring six points and adding three rebounds.

The loss marks the fifth consecutive loss for the Gophers as they fall to 11-6 on the season and 1-5 in conference play.

In four of their five conference losses, the Gophers have lost by one score. Minnesota will look to recover this Sunday Jan. 19 as they head east to take on Purdue.