Rep. Ilhan Omar spoke with the Minnesota Daily for a Q&A after her first legislative session. 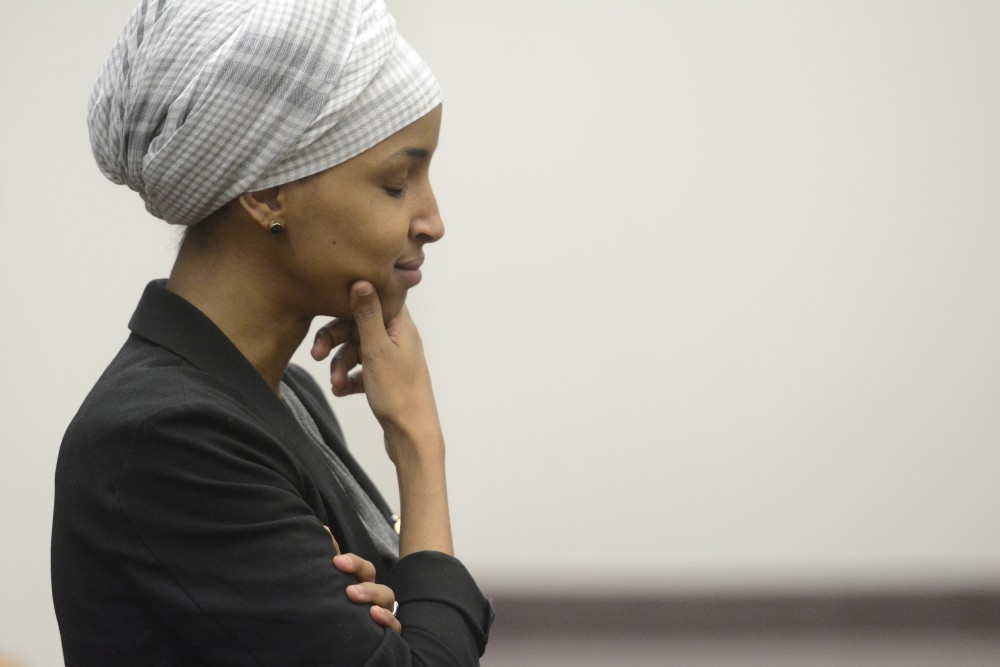 As the state Legislature closed out its session, first-year Rep. Ilhan Omar, DFL-Minneapolis, spoke with the Minnesota Daily to reflect on how things went.

Omar spoke on what it meant to be the first Somali-American state lawmaker in the U.S., the partisan nature of politics and various budget bills.

Towards the end of the session, state lawmakers were working all day and all night. How did you stay awake?

Lots of coffee and tea. I had a really huge village of people who supported my campaign, who came around every single night to bring me tea and coffee and food. They brought some comfort stuff, so they went to Somali restaurants to bring me Somali tea, Somali food — because Capitol food gets really awful to have to consume all the time.

Generally, you and other DFLers wanted more spending and less tax breaks in the budget — it was $46 billion overall with a $1.65 billion surplus, as you know — and so considering how many compromises Republicans and Democrats needed to make, can you feel good about the budget now that it’s finished?

Yeah, I mean it was a compromise to be able to just finish, but I think a lot of us understand that the budget that we ended up passing is one that shortcuts Minnesotans, and undermines the progress that we’ve made over the years.

In recent years, reluctance to compromise has run deep in both state and national politics. Politicians stay true to their belief but also divide the government. During the session, how did you decide when to compromise and when to not?

… I think it’s easy to find a compromise when you are invited as an equal partner in creating that compromise, and unfortunately in this last session, we found the Republican house majority was not interested in having any of our voices present in creating the state’s budget.

So, what did that look like? Lots of closed-door meetings?

Lots of closed-door meetings. Oftentimes when we would come up with a compromising position, [Republicans] weren’t interested in that. … All of our amendments were voted down without even a debate.

About the bills that you chief authored — I don’t think any of them got passed by themselves, but did some of them get fused into larger bills? And which ones are you most proud of?

I worked really hard on higher ed and career preparedness committee. [It] was a real joy to be able to serve on that committee. I represent, I think, one of the highest concentration of students in one district, and I also have the distinct privilege of representing a private and a public institution. The bills that I was able to have passed included in the higher ed omnibus bill were the ones I was really proud of.

In general, were your experiences as state legislator what you expected them to be, or did they turn out different?

I had a really higher expectation of there being a collaborative effort in not only creating a state budget but in creating policies that would be more prosperous and equitable [in] Minnesota. … I think it’s really disappointing to see extreme partisanship play out in the final weeks of the session.

I know you were an assistant minority leader. Is that uncommon for a freshman legislator to be in that title?

Yes, and I might be the only to have done so.

Why were you in that position?

It is a position that you actively seek and you run for, and I put my name in the hat to be voted in by my colleagues as assistant minority leader, and I was honored that they chose to trust that I could provide some leadership as a freshman. I think it was a really unique experience to be able to attend leadership meetings and be in conversations about not only shaping the future of our caucus but the future of our state.

Changing tracks, I was thinking about [how] in the past year there’s been many incidents of racial, ethnic and religious discrimination. In that context, what’s it been like being the first Somali-American lawmaker in the U.S.?

Not sure I really have the words to fully describe what the experience is like. Oftentimes, when people are elected as a freshman, the only challenge that they have is sort of getting themselves acclimated into the process of serving. But when you have the added pressure of not only being a representative for your district but for a religious group or a cultural group, it sort of increases the amount of pressure that you have. …

It influenced it immensely. It allowed me … space to be able to have hard conversations, and to force people to engage in dialogue about what it truly means to be a Minnesotan … and to really talk about what our American ideals were and how far we’ve been from it in the current realities we’re living in.

I don’t know where to begin. I think the Trump administration has really had a significant psychological impact, not only on Somalis, but on immigrants and even on minorities in any community that feels marginalized.

Editors note: This Q&A was edited for length and clarity.