The Hawkeyes have won seven of the last 10 match-ups between the teams. 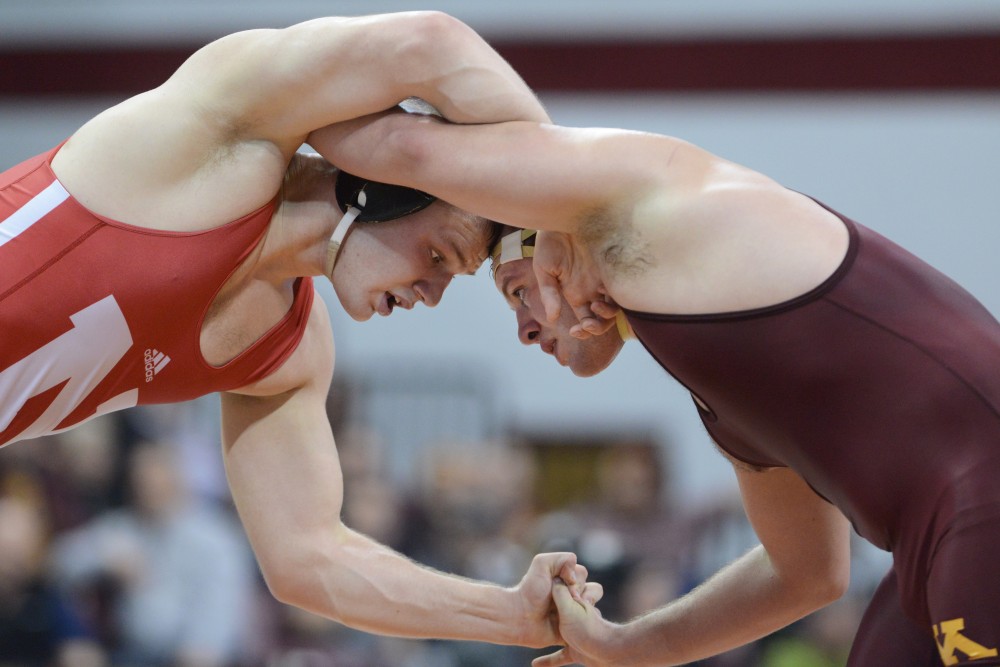 One of the biggest rivalries in college wrestling will be renewed this weekend, and one team looks to turn the tides on what has been a somewhat one-sided affair.

The Hawkeyes present a tall task, however, having just defeated No. 4 Ohio State, and feature a lineup of six ranked wrestlers, three of whom are in the top three in their respective weight classes.

“For us, in the Big Ten conference, it’s just another tough dual,” said Minnesota head coach Brandon Eggum. “They’re a really good team, so we have to be ready to go.”

Iowa has had Minnesota’s number in recent years, and has won seven of the last 10 duals dating back to the 2009-10 season.

Regardless of the past statistics, Minnesota redshirt senior Michael Kroells insisted the Gophers are only focused on Sunday’s match.

“If you say ‘wow [they’ve] had our number,’ it will affect your performance on the mat,” Kroells said. “This is a different team, and we have new guys in the lineup this year.”

To pull off the upset, Minnesota will have to shore up its lower weights—an area where Iowa has shown quite a bit of strength. The Hawkeyes have top-five wrestlers at 125, 149, and 157 pounds, as well as another ranked wrestler at 141 pounds.

Catching the brunt of that for Minnesota is redshirt sophomore Ethan Lizak, who will wrestle at 125 pounds. The sixth-ranked Gopher will face Iowa senior Thomas Gilman, who is ranked No. 1 in the nation in the weight class. Gilman is a perfect 19-0 on the season, and has been held to a regular decision just twice. Lizak will look to capitalize on technical fall victories in his last two matches in order to save points for Minnesota, and perhaps steal a major upset.

Minnesota redshirt junior Jake Short knows the dual will be a tough fight, but likes the Gophers’ chances.

“I’m just ready for a brawl,” Short said. “I think we’re in a position where we can take this dual if everyone goes out and competes.”

Short’s match at 157 pounds against No. 2 Michael Kemerer could be pivotal in turning the dual in Minnesota’s favor. The ninth-ranked Short’s veteran sense could play a part against Kemerer, who is just a redshirt freshman .

“You gotta look at division one wrestling as you can beat any guy, any day,” Short said. “I think I match up really well with [Kemerer], and I think it’s a great opportunity for me.”

The Gophers, per usual, look to have the upper hand in the upper weights, particularly at 197 pounds and heavyweight. No. 2 Brett Pfarr and No. 8 Kroells hold down those positions, respectively, and the pair will look to score bonus points to give Minnesota a chance at the upset. Eggum knows that the bonus points are key, but acknowledges Iowa could negate that strategy.

“The guys they’re competing against are probably going to have a game plan—it may not even be to beat a guy like Pfarr or Kroells,” he said. “It would probably be ‘Let’s fight these positions and stay in the battle as long as we can without giving up bonus points.’”

From a spectator standpoint, the dual should be a good one to watch, as two of the nation’s top ten wrestling teams go head to head. The rivalry aspect doesn’t hurt, either.

“Part of being a Gopher is hating Iowa in general,” Kroells said. “It always means so much to wrestle them.”