This is the first time in his 25 years at Minnesota that Robinson has signed a multi-year contract. 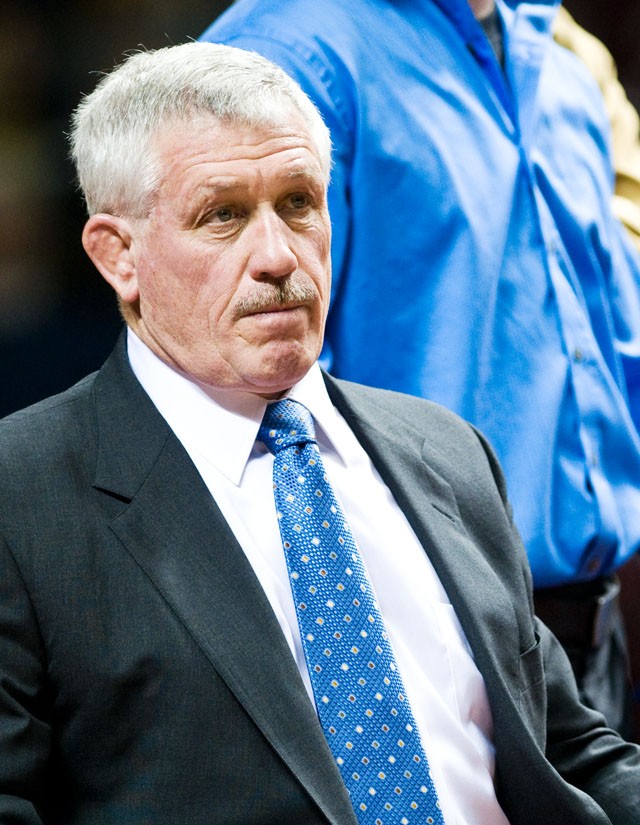 No wonder J Robinson looked so comfortable at his teamâÄôs duals over the weekend.

Following a 2-0 weekend in which Robinson uncharacteristically slouched in his chair, Minnesota Athletics Director Joel Maturi announced Wednesday that he and the two-time national coach of the year have agreed to a five-year contract, retroactive to 2010.

The deal, which will keep Robinson at the University of Minnesota until at least the 2014 season, is the first multi-year contract of his 25-year career.

Robinson, who has been at the helm for all of MinnesotaâÄôs three national titles, had previously worked on a year-to-year basis with his contracts, deciding only recently that some stability would be nice.

Because of his success and the lofty status to which heâÄôs raised the program, itâÄôs never seemed likely that Robinson would leave after any given year, but the five-year contract will ensure that he is with the Gophers through 2014.

âÄúJoel and I had been talking about (the contract) for a couple of years, and we got together to work out some of the details,âÄù Robinson said in a release. âÄúIt seemed to work out, and it seemed to be a good time to do it.âÄù

Robinson took over in 1986 as the seventh head coach in program history, and since has taken the Gophers to previously unattained heights. In his 25 years, RobinsonâÄôs teams have won three national titles (2001, 2002, 2007), six Big Ten championships and have produced 12 individual national champions.

âÄúI could not be more pleased that we have been able to reach this agreement with J,âÄù Maturi said in the release. âÄúThis multi-year contract is a just reward for a job well done and we are thrilled to have an individual who is widely considered to be among the finest wrestling coaches ever committed to our program through 2014.âÄù

Robinson was inducted into the National Wrestling Hall of Fame in 2005, and holds the NCAA record for having 10 All-Americans in one season (2001). His 354 career dual wins are the most among active Big Ten coaches.

There is no indication that this will be his final contract (in other words, a retirement contract), and Maturi could not be reached for further comment.

With Robinson (and likely his staff) now cemented through the next three seasons, No. 5 Minnesota (10-3 overall, 1-0 Big Ten) looks ahead to FridayâÄôs and SundayâÄôs duals against Purdue and No. 18 Illinois, respectively.

Captains Zach Sanders (125 pounds) and Mike Thorn (141) have dominated this season, and will likely lead the team into competition again without the third member of the captain triumvirate, Sonny Yohn (197).

Yohn was injured at the Southern Scuffle and has yet to compete again, but assistant coach Joe Russell said he is working his way back and is currently day-to-day.

One more potentially critical piece to MinnesotaâÄôs 2011 puzzle, Jake Deitchler (157), is also working his way back to health.

Deitchler had to sit out the seasonâÄôs first eight duals for violating NCAA rules by accepting prize money at a tournament, but is now eligible to compete.

Before the winter break, Robinson said Deitchler is dealing with a concussion and is still not healthy enough to compete. Russell said after SundayâÄôs dual that he is training with the team.

He would be a huge boost to a lineup that still has some holes in need of plugging.

Kevin Steinhaus emerged early at 184 and has a stranglehold on the spot. Until last weekend, the remaining three were still up in the air.

But it seems as though fans can consider the hole at 133 sealed and spackled.

But Thorn has taken the weight and run with it of late, posting a 2-0 record last weekend which included a come-from-behind extra time victory and a major decision.

âÄúI hope this is a big win for him,âÄù older brother Mike Thorn said after FridayâÄôs dual. âÄúI think itâÄôd really help him out to get some confidence and just start to realize that he could be there with the best guys in the country.âÄù

With a clean bill of health after early-season injury problems and boosted confidence, the younger Thorn will learn quickly if he stacks up with the nationâÄôs best, as he will likely see No. 7 B.J. Futrell of Illinois on Sunday.