A bill would allow survivors and some institutions to keep pieces of the collapsed Interstate 35W bridge. 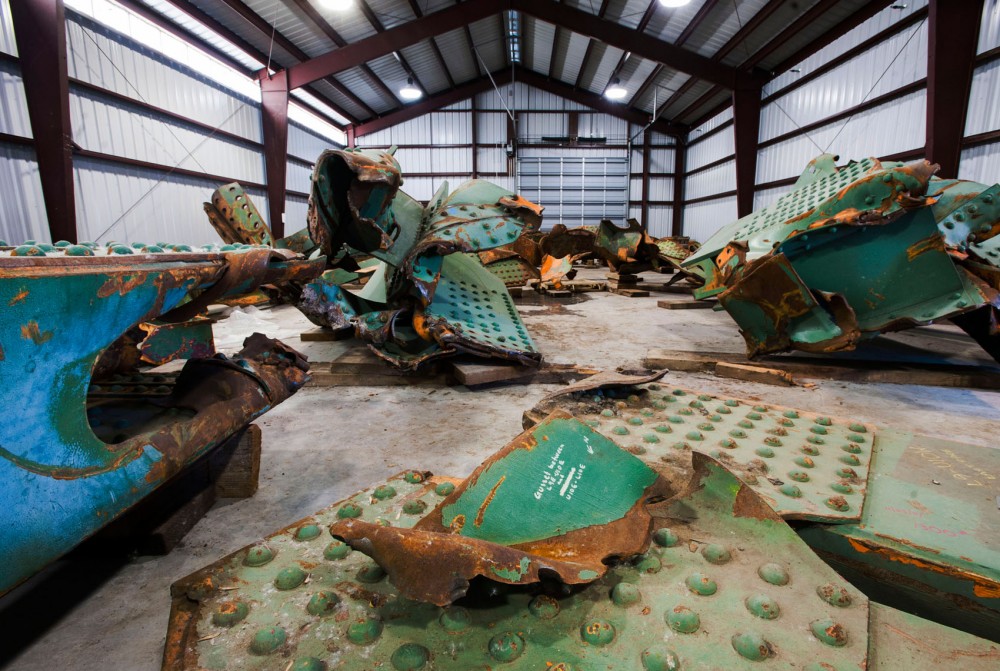 Dozens of pieces of wreckage from the old 35W bridge lay in storage Monday, April 1, 2013, at a MnDOT facility in Oakdale, Minn. The bridge collapsed during rush hour on Aug. 1, 2007, killing 13 people and injuring 145 more.

Six years ago, the Interstate 35W bridge collapsed over the Mississippi River.

Thirteen people died and about 100 were injured while steel and concrete beams lay strewn about the river and its banks.

Now, what remains of the bridge sits in storage facilities in the east metro and could soon be distributed to serve as reminders to one of the worst bridge collapses in state history.

A bill working its way through the state Legislature would allow those affected by the collapse and those hoping to learn from it — like university engineering departments — to keep a piece of the bridge.

The Minnesota Department of Transportation, which is heading the initiative, contacted the University of Minnesota in January to see if the school was interested.

Joseph Labuz, interim director of the civil engineering department, said the University accepted in hopes of creating an educational display.

“We are seeing that as an opportunity to remind ourselves and our students of the importance of our work,” he said.

Tentatively, the department plans to display the bridge remnants with research papers and books written by University faculty about the collapse.

Because of the University’s proximity to the bridge, the collapse has had a notable impact on the community and the school’s curriculum.

Professors have taught classes solely focused on the collapse, and civil engineering professors often use the incident to show the importance of accuracy.

“If you think about a mechanical engineer or a chemical engineer, if their designs go wrong — like your iPhone or a cleaning product — those are things you can generally live without,” said Nathan Warner, president of the American Society of Civil Engineers at the University. “But if a civil engineer makes a mistake, then that can result in a significant loss.”

Under state law, remnants from the bridge are required to be melted down and sold, and the money would be returned to the state general fund.

The proposed bill would create an exception so the state could honor the requests from survivors — who make up the bulk of requests — and others, like the University.

But not everyone’s request will be filled, and the proposed bill creates a priority list of people and organizations that can receive a piece.

The first and second tiers are reserved for the Minnesota Historical Society and survivors, while higher education institutions are fourth, behind certain government agencies.

“The intent is to give it to people who have some connection with the structure or the collapse, or people who might use it for instruction and education,” said MnDOT spokesperson Kevin Gutknecht.

Pat Nunnally, the coordinator for the University’s River Life Program, said the incident affected more than just those on the bridge.

“Nearly everybody had some kind of story where they knew someone who had that ‘there, but by the grace of God,’ moment,” he said, “or had been directly involved, or had been part of the aftermath — the response teams and cleanup and things like that.”

Nunnally helped edit a book, “The City, the River, the Bridge,” on the collapse and taught a one-time class at the University studying the impact of the incident.

Civil engineering professor Roberto Ballarini uses the bridge in his lessons at the University.

Ballarini, whose work appeared in “The City, the River, the Bridge,” researched the collapse for two years. Because of his involvement, he said he would appreciate having a bridge piece for his office and to use in class.

Currently, approximately 9 million pounds of the bridge are being stored in Oakdale and Afton, Minn., Gutknecht said. If the legislation passes, MnDOT will have six months to fill requests, but preparing the steel for distribution may not be easy, Gutknecht said.

The civil engineering department hasn’t decided the details of their MnDOT request — like the size and where it’ll be displayed at the University — but Labuz knows the limitations.

“Steel is a very high unit weight, so it doesn’t take much to make it heavy,” he said. “So we have to be able to have it mounted safely.”

Labuz said the installation will be “respectful of the tragedy that occurred” and will primarily serve an educational purpose on campus.

“Some people may be using it as an opportunity to set up a memorial, but that is not the case from our perspective,” he said. “It’s more about a lesson learned — a reminder of this tragedy and the importance of good analysis and design.”