The game resulted in 25 penalties, including five game misconducts. 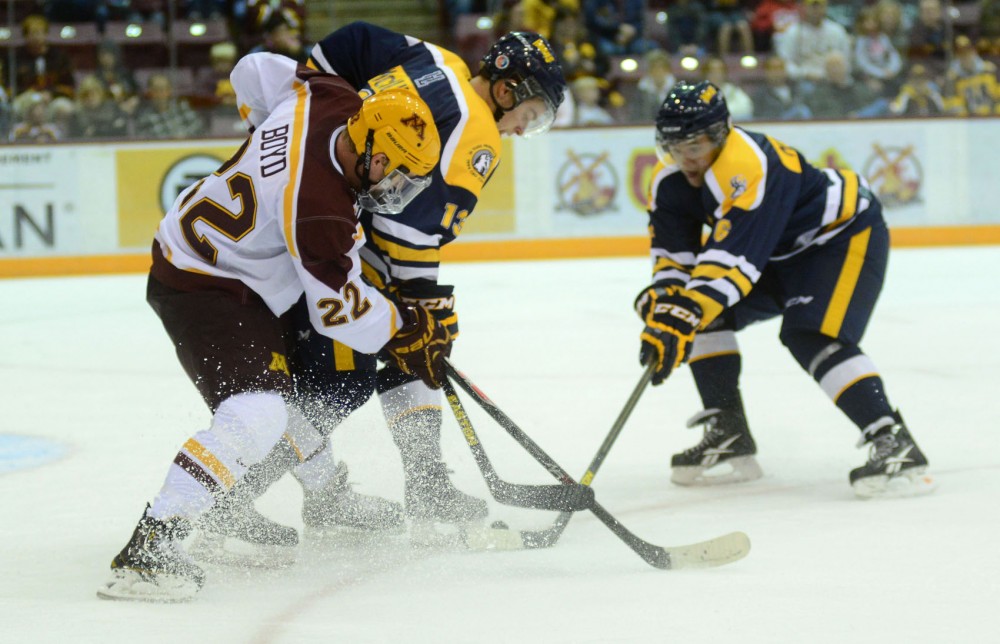 Minnesota froward Travis Boyd fights for the puck against Lethbridge on Saturday at Mariucci Arena.

The Gophers men’s hockey team had just one exhibition game before the start of its 2013-14 season.

While the Gophers may have hoped for it to be a slow and easy warm-up, that notion was quickly smashed into the boards.

Minnesota beat Lethbridge 5-1 at Mariucci Arena on Saturday, but not without a combined total of 25 penalties assessed to the teams.

There were 105 total penalty minutes — including five game misconducts that led to ejections for three Lethbridge and two Gophers players.

“That was a little shocking,” junior forward Travis Boyd said. “You know a Canadian team’s going to play physical, but I don’t know if we expected it to be that chippy and that kind of dirty, almost.”

In a game that was meant for testing out lineups and giving as many players as much ice time as possible, the penalties were counterproductive for head coach Don Lucia.

“You can’t get some guys out there, and that was a big part of today,” Lucia said. “You want to evaluate as many players as you can in a game like this.”

While the freshmen were in the mix, scoring three of the Gophers’ five goals, the upperclassmen tried to keep them from mixing it up with the other team.

“Hudson Fasching was getting into it quite a bit,” Boyd said of the freshman forward. “And I think [Nate] Condon came over to him and said, ‘ … We don’t need any of that, especially at an exhibition game.’”

Junior forward and captain Kyle Rau went to the box three times for minor calls but always seemed to be in the middle of whatever glove-shedding, sticks-flying scuffle ensued.

“It feels good to get out there and do that stuff because you go six months without doing it,” Rau said. “So you need it.”

While the roughing was a bit distracting, the Gophers still managed a good showing for their first time on the ice. They outshot the Pronghorns 46-12, eliciting 41 saves from Lethbridge goalie Dylan Tait.

“He made a lot of good saves tonight,” Lucia said. “We had to work hard to beat him.”

Lucia said even though he played all three of his goalies, his team didn’t learn much defensively in the game and will have to test its defense next weekend in the season opener.

Fasching scored the first goal of the night, assisted by Rau and junior defender Ben Marshall at 6:29 in the first period.

Lethbridge managed to tie it up at 7:50 in the second period via Guillaume Naud from David McMullen on the power play.

Boyd notched a power-play goal of his own at 14:55, and freshman defenseman Michael Brodzinski netted a goal at 19:04 to make it 3-1.

While Minnesota did produce a winning result, Boyd said the Gophers had a tough time figuring out lines and playing with new partners nearly every shift.

“I think we’re still searching for our identity,” Boyd said. “As a team, I don’t know exactly what kind of team we’re going to be this year.

“We’ve got a lot of new players, a lot of new guys that need to fill roles that we lost last year, so I think it’s still a work in progress.”