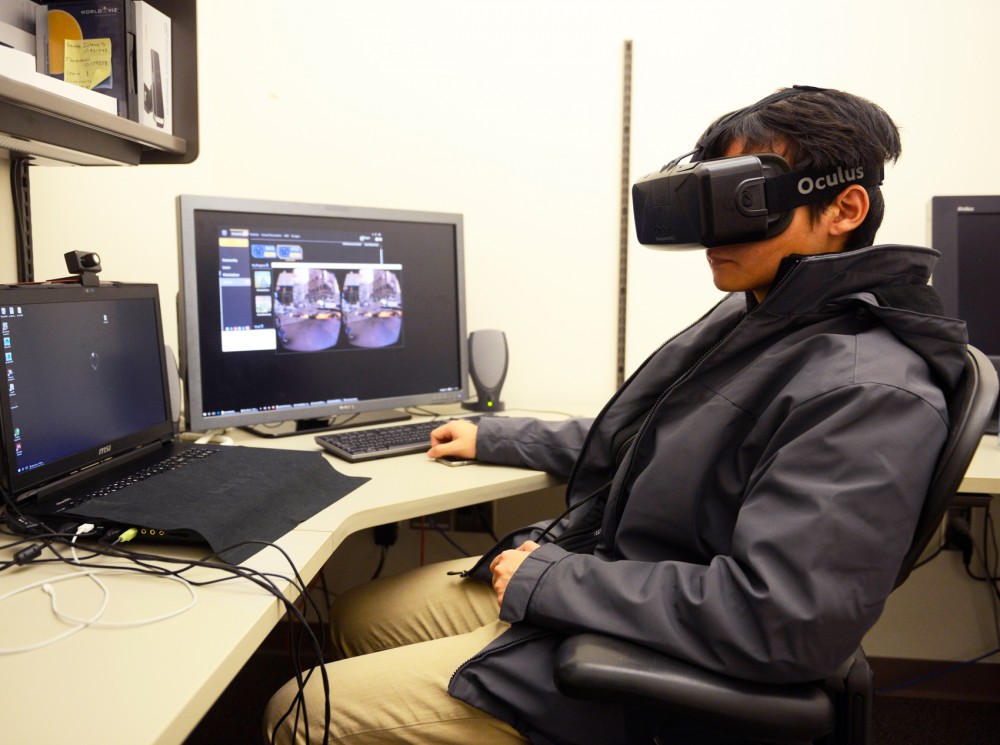 Virtual Reality Lab Manager Penh Liu demonstrates the Oculus Rift, a head-mounted virtual reality display in the in Walter Library on Monday. The Rift allows the user to play immersive games, watch 360° videos, and interact socially with other users.

by Olivia Johnson
Virtual reality technology may need some tweaks to make it more usable, especially for women.
The Oculus Rift, a motion-sensing headset that creates an interactive gaming world, could be transformed for use in other industries in the future. Still, a University of
Minnesota study, to be published next March, reveals the technology causes motion sickness, especially in women.
University Kinesiology Professor Thomas Stoffregen has been studying the Rift and how it affects its users since the technology company Oculus VR released an early version of it in 2013.
Through his research, Stoffregen has found for every three men that get seasick, five women will. That side effect is consistent with the virtual reality technology — for every one man that gets sick using the Rift, four women do.
Stoffregen said developers have a responsibility to create a device compatible with either sex.
“When we get into interactive technologies in general and things like the Oculus Rift in particular, you can no longer say ‘Oh, too bad,’ because we made it,” Stoffregen said.
Facebook founder Mark Zuckerberg bought Oculus VR for $2 billion in March  2014, and the purchase has heightened attention to the product’s potential uses, Stoffregen said.
“Many heated claims have been made about what will be happening with this,” he said.
Still, he said Rift developers need to change the technology to accommodate women before it can expand.
“We need a ‘Why’ that will help us to fix it,” Stoffregen said, adding that attempts to make a fix have been inadequate.
The device also can cause bodily confusion in its users by leaving out elements that create physical balance while simulating reality, he said.
“If you are playing a driving video game that shows you going 90 miles an hour around corners, well; you’re not going 90 miles an hour around corners,” Stoffregen said. “And
if you lean into the turn in your video game, then you will in fact be leaning away from stability in the real world that your body actually inhabits.”
The lack of inertia that normally comes from leaning into a turning car makes the Rift-user feel imbalance, he said.
And that imbalance, added to other uncomfortable elements, makes users, especially females, feel motion sick.
Stoffregen’s study used Rift devices and a series of Oculus’ games to look at how people’s bodies react to the virtual reality.
Researchers measured each participant’s body movement — which Stoffregen said differs based on sex — and participants played a game using the device for 15 minutes.
The time it took for a person to get sick was recorded.
About 35 percent of study subjects got sick within 10 minutes, he said. Of those who felt uneasy, 70 percent were women.
“We have a bigger problem than we thought,” Stoffregen said.
Computer Science and Engineering Professor Victoria Interrante has been working with virtual reality technology since the late 1980s and said she hopes every architectural
firm and real estate agent will have this device to provide at-home walkthroughs of buildings or houses for their clients.
“I have never been so excited as I am right now [about the Oculus Rift],” Interrante said. “When it gets cheap enough that people can invest in that, you know, we’re ready with the software.”
Peng Liu, a fifth-year computer science doctoral student studying virtual realities, said he appreciates the device’s wide-angle view and motion tracking.
“In my opinion, the game and movie industry can use this technology to improve the user experience to a new level of immersiveness,” Liu said.
Oculus technology made for the Samsung Galaxy cellphone is available for preorder through Best Buy and Amazon for $99.
Delete Image
Align Left
Align Center
Align Right
Align Left
Align Center
Delete Heading