The Humphrey School hosted a talk about Social Security, Medicare. 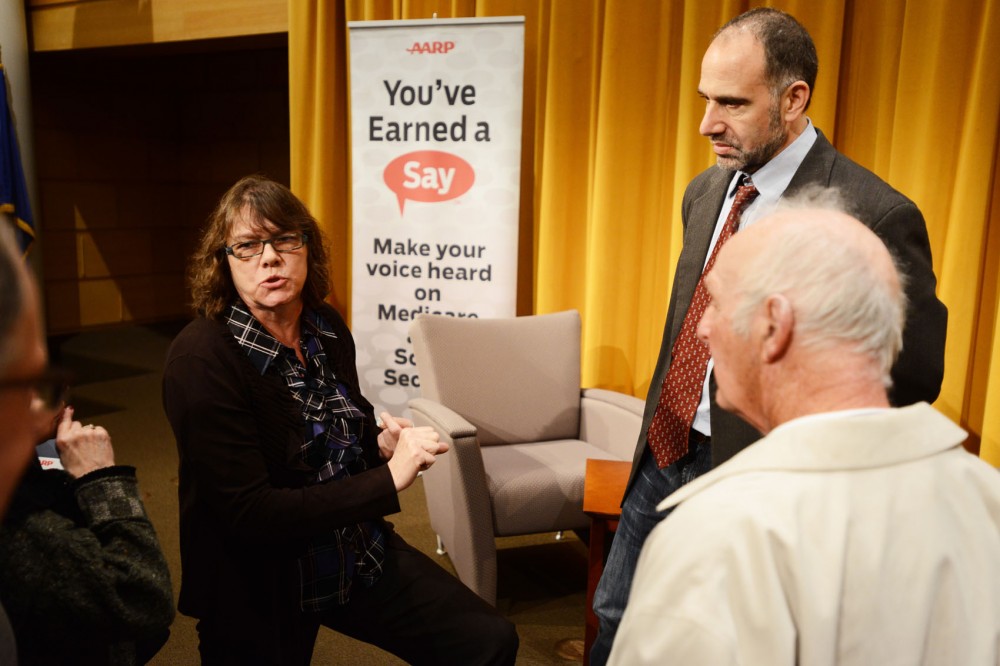 After lying dormant for years, concerns over Social Security and Medicare have returned to the public eye with the “fiscal cliff” looming.

To address the issue, the Humphrey School of Public Affairs held a discussion on the topics Wednesday in a packed Cowles Auditorium.

The event, put on by the Humphrey School and the AARP, featured economists Dean Baker and Kevin Hassett representing progressive and conservative perspectives on the topics, respectively.

The issue of how to fund entitlement programs for future generations is a focal point of the national debate.

Michele Kimball, director of the AARP in Minnesota, opened the event by outlining the organization’s efforts to get feedback from Minnesotans on Social Security and Medicare this year.

“There’s definitely agreement that something needs to be done,” Kimball said

She said it’s been a while since there was serious dialogue about the topic.

“This is really the first time since the early 1980s that this type of systematic change has been debated.”

Larry Jacobs, director of the Center for the Study of Politics and Governance at the Humphrey School, moderated the event and quickly steered the discussion to the subject of the national deficit, which could keep future entitlement programs from continuing.

Baker, who founded the Center for Economic and Policy Research and contributes weekly to the Guardian and the Huffington Post, argued that the deficit isn’t overly concerning, and the upcoming “fiscal cliff” — the economic slowdown expected as some George W. Bush-era policies expire in January — is overblown.

“If we didn’t have the deficit, we’d have lower growth and higher unemployment,” he said.

He also cited foreign countries’ willingness to loan the U.S. money with low interest rates as evidence that the current state of the nation isn’t as dire as it’s made out to be.

Hassett, the senior fellow and director of economic policy studies at the American Enterprise Institute, disagreed and said the deficit is a major problem.

“We’re about a decade away from a point where the growth of the economy could stop,” he said.

The former economic adviser for Bush, Sen. John McCain and Gov. Mitt Romney said entitlement programs are harder to pay for now because there are less people paying into it.

“One of the problems is we’re supporting retired people with fewer people,” he said.

Incentives to keep people working, including eliminating income tax for those who work past retirement age is one way to help fix the problem, Hassett said.

Baker said policies need to have flexibility within a reasonable time horizon rather than looking at solutions that will fit 50-plus years from now.

“The idea that if we don’t act today we’re condemning our children to impoverishment, that doesn’t make sense,” he said.

Both Baker and Hassett mentioned that few young people today believe they’ll have social security when they reach retirement age.

“Polls have shown for years that young people doubt whether they’ll get Social Security,” Baker said.

The event was attended largely by an elderly crowd — most of the crowd identified as AARP members — but moderator Larry Jacobs said thwe subject is important regardless of age.

“The issue of entitlements is of importance to all Americans,” he said.

Jacobs said the event was an opportunity for a civil discussion on a divisive issue.

“We had two of the smartest, most influential economists on the economy and entitlement programs engaging in a real conversation,” he said. “This wasn’t just hot-headed talking points; these were smart people wrestling with the big questions.”