This year’s fest focused on the marriage amendment up for a vote in November. 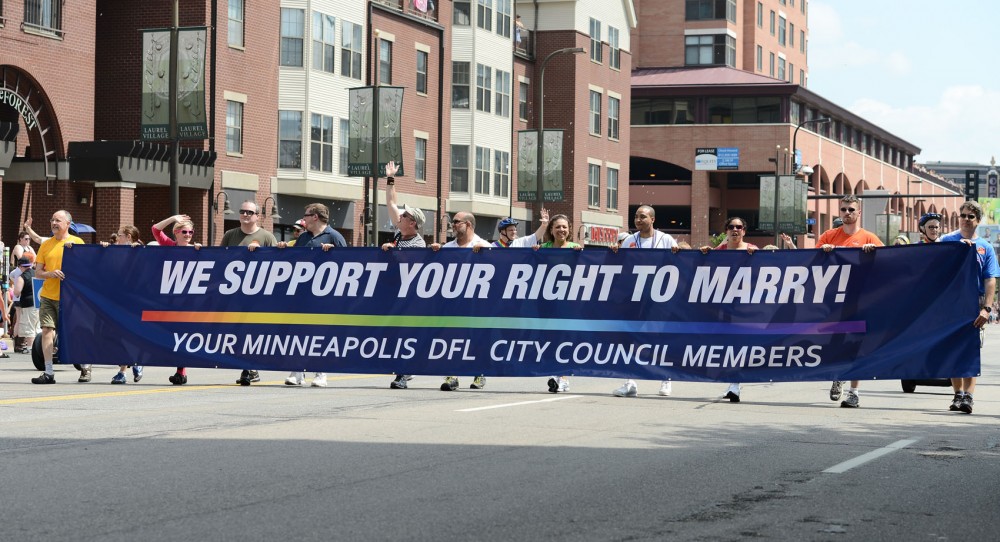 For 40 years, fish nets, multi-colored wigs and platform shoes have been staples of the Twin Cities Pride Festival’s unspoken dress code. But this year, the event’s most popular accessory was an orange sticker. In bold letters, it read: “Vote No.”

This year’s festival focused on the proposed marriage amendment that would define marriage as a union between “one man and one woman” in Minnesota. At events, people were encouraged to vote against the amendment, which was proposed in May 2011 and will be on the ballot for the Nov. 6 election.

Many of the University of Minnesota students and organizations who participated in the event said they’ll carry discussions around the marriage amendment into the upcoming academic year.

“We are focusing on the goods of marriage, the bads of marriage and also the issues that maybe we are missing,” said Matthew Antonio Bosch, the director of the University’s GLBTA Programs Office.

Adam Scott, president of Delta Lambda Phi — a gay, bisexual and progressive men fraternity — said pride goes beyond the theme of a weekend festival in downtown Minneapolis for members of his fraternity.

“Pride is knowing that being different is beautiful,” Scott said. “We as a community don’t get to celebrate that enough.”

Scott said he was excited to see the Twin Cities event stand behind a cause but often feels people are confused about what voting “No” to the marriage amendment would mean for GLBTQ individuals.

Though he said some think voting against the amendment will result in gay marriage, that is not necessarily the case — it would merely mean keeping gay marriage from being unconstitutional in the state.

Brendan Follick, a sophomore in the University’s youth studies department and co-chair of Queer Student Cultural Center, said he agreed.

He said QSCC will educate students about how to vote on the amendment issue.

“We are going to teach people how to register to vote because the younger voters can really make a difference,” Follick said.

According to recent research, Minnesotans are divided over the marriage amendment.

A recent poll by the Minnesota Public Interest Research Group supported the evidence that age is a factor in how people will vote. It reports that 73.3 percent of Minnesota college students are likely to vote against the marriage amendment.

Minnesotans United for All Families was the organization behind the “vote no” stickers, buttons and shirts that plastered Pride weekend.

Dot Belstler, executive director of Twin Cities Pride, said the organization was eager to collaborate with Minnesotans United for All Families.

“As soon as we knew this was going to be on the ballot, we knew Pride needed to focus on that,” Belstler said.

Kate Brickman, a representative from Minnesotans United for All Families, said University representatives were among the nearly 300,000 festival attendees — “the LGBT community and their friends, families and allies, those are the people who are going to be most hurt by this proposed amendment.”

Belstler said Twin Cities Pride also collaborated with Minnesotans United for All Families a year ago in order to create a bigger impact for Minnesotans to vote “No.”

“The number of people that don’t vote, that come to Pride, could turn the election,” Belstler said.

At the Pride Parade, University students discussed why voting was important to them.

Charlie Laikind, a senior opposed to the amendment, called it a “human rights issue.”

Melissa Zeman, a gender studies junior, and her girlfriend DesiRee’ Shelton discussed their decision to vote against the amendment.