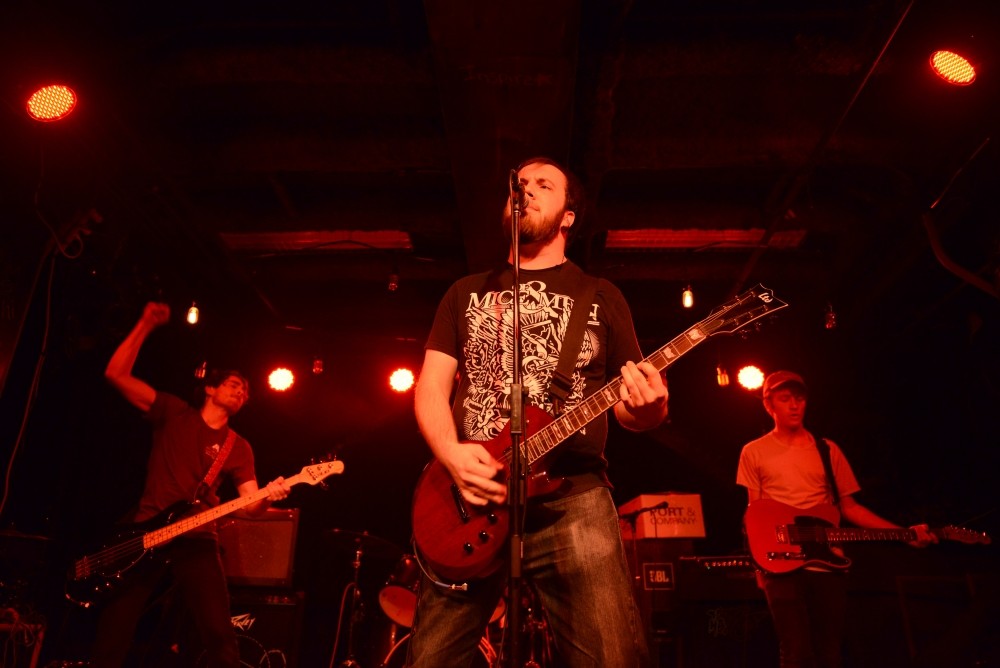 Local band The New 86 preforms during the More Local Than Local show at the Whole Music Club.

Eating free peanuts and throwing their shells on the floor, sipping a soda and stepping outside to smoke a joint before the main music act began. That’s how Steve Fingerett remembers the Whole in the early ’70s.

Back then, it was a hub for young people in the Twin Cities. Concert-goers paid 25 cents for admission to see live music.

Fingerett was a commuter student at the University of Minnesota and decided he wanted to feel more involved on campus. In 1972, he started volunteering as a bookkeeper for the Whole.

It was there he would first meet his future wife, Ricki Gale, who ran the venue’s books the previous year. In the early ’70s, the Whole (known in those days as the Whole Coffeehouse) hosted concerts featuring folk, pop and rock bands.

Fingerett is one of hundreds of students who have volunteered at the Whole over the past 50 years.

The Whole became a music venue in 1968, a transition from its previous identity, “The Gopher Hole” — a common area for students and equipped with vending machines.

“Student apathy toward union dances has transformed the Gopher Hole into the Whole coffeehouse on Friday nights,” reported a Minnesota Daily article from Feb. 25, 1968. The Whole will celebrate its 50th anniversary this month with three days of festivities, beginning with a free concert featuring local bands on Thursday, Oct. 18 and ending with a performance by Brother Ali on Oct. 20.

For years, the Whole, no matter its official name, has served as the center for music and a meeting place for students on the Twin Cities campus.

The windowless room, tucked away in the sub-basement of Coffman Memorial Union, has seen many artists who go on to become household names.

The Replacements gave a concert at the Whole in 1983. Green Day headlined in 1992. Modest Mouse played at the venue in 1998.

During Fingerett’s year at the Whole, they booked the prodigious American blues singer-songwriter Bonnie Raitt. Raitt played at Northrop Auditorium — her audience was too large for the 240-person capacity at the Whole Coffeehouse. Tickets were $2.

“We had an amazing amount of talent. Vassar Clements and Doc Watson and the band Orleans … basically every weekend,” said Fingerett.

The Whole’s physical location has never changed. But the music has.

Simon Groebner, who attended the University from 1991 to 1998, remembers a very different version of the Whole. It was the one redeeming place within Coffman Union, a University building Groebner painted as a drab and unwelcoming place when he was a student.

“Coffman was kind of hard to get to and it was not very appealing to stay there,” he said. “So we found this club in the basement and it appealed to my instincts to take advantage of it.”

The music scene in Minneapolis was a significant reason why Groebner chose to attend the University. He spent his freshman year in “music heaven,” attending as many shows as he could.

“As an 18-year-old, the thing to do was go to First Avenue, which had a few all-ages shows, and the Whole at the [University],” he said.

Groebner spent so much time at the venue that it was only fitting he became the Whole’s volunteer coordinator in 1992. Green Day came to the Whole in May of that year. Back then, the band was just another name in a sea of punk rock acts. The band became a breakout success about two years later with the release of their major label debut, “Dookie.”

“It was the peak of the alternative era,” Groebner said. “There was a lot of attention for these type of rock bands. Everyone was waiting around to see who was going to get famous.”

Throughout the years, the Whole has never stopped reflecting the changes in current music culture. Students have always been at the forefront of deciding which bands play.

A committee of three students, hired for year-and-a-half terms, makes all the booking decisions. In its 50 years, the Whole has seen shifts from bohemian folk to punk-rock to hip-hop.

“There are students on campus that don’t feel like they belong anywhere else, and then they find the Whole and they’re like, ‘Oh, this is me,’” said Ashley Kaser, program board adviser at the Whole Music Club.

“It’s a different vibe down there. I think we can create a home for people on campus that don’t really feel included elsewhere.”