The forward has started seven of the Gophers eight games this season. 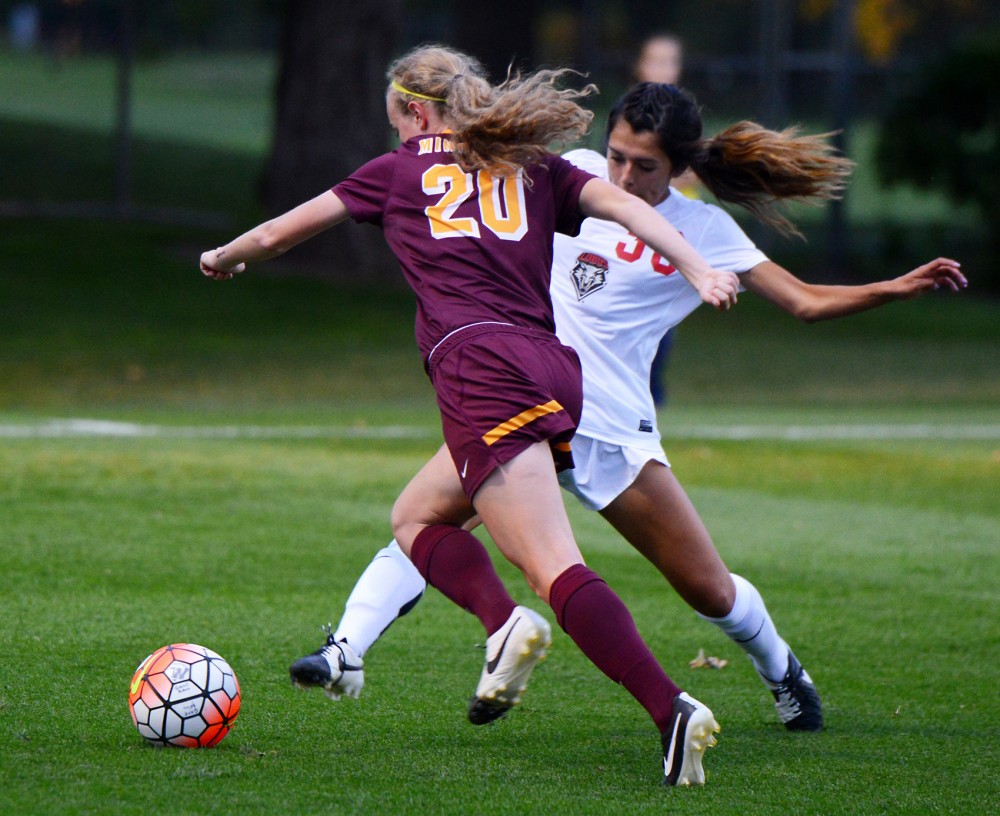 Freshman April Bockin dribbles the ball down the field on Friday's game against the New Mexico Labos. The Gophers won 1-0.

by Kaitlin Merkel
When Gophers freshman forward April Bockin first began training with the Minnesota soccer team this past summer, she never anticipated the amount of playing time she would get or the impact she was about to make.
“Everyone was telling me freshmen don’t usually play,” Bockin said. “So I came in with the mindset hoping I would get some playing time, but I never imagined starting or playing as much as I do.”
But so far, Bockin has started seven of the Gophers’ eight regular-season games. She has scored one goal while recording two assists and 12 shots, tied for the most and the secondmost on the team, respectively. She also has eight shots on goal, leading the team.
For her efforts, Bockin was named the Big Ten Conference’s Co-Freshman of the Week last week after scoring her first collegiate goal against Marquette.
Minnesota head coach Stefanie Golan predicts her success will continue heading into Big Ten lay.
“She’s certainly earned the opportunity going into this weekend,” Golan said. “Against Ohio State, she’s in the starting lineup. … We think she’s going to be a contributor in a big way.”
Coming off her senior year at Eden Prairie High School, in which she was named the 2014 Minnesota Ms. Soccer, Bockin said it’s been a gradual but smooth transition into college play.
Senior co-captain and defender Haley Helverson said she’s impressed with the sizable impact Bockin has made early on in her first season.
“Coming in and not really knowing what to expect, right off the bat she adjusted really quickly, and she’s provided a lot of speed and direction up top,” Helverson said.
While Golan said she knew Bockin had potential heading into the season, it’s hard to predict how a freshman will adjust and perform at the collegiate level.
But Bockin, Golan said, has excelled on the offensive attack.
“We feel like she is setting up a lot of opportunities for us,” Golan said. “We’re getting more dangerous with her on the field.
Bockin credited captain’s practices over the summer as being key in her integration into the team’s dynamic and her transition to the faster speed of play in collegiate soccer.
“[Captain’s practices] helped us learn how to play the college game,” Bockin said. “Once preseason came, I was a lot more comfortable.”
Despite all of her early success, Bockin said she continues to focus on improving her game, particularly her defensive press as a forward.
Both Helverson and Golan described Bockin as hardworking, and Golan said the freshman is already underrated.
“The thing I think most people don’t give her enough credit for is her vision and distribution,” Golan said. “I just don’t think people give her the credit that she deserves for how much she creates and brings other people into the play.”
Now, eight games into her freshman campaign, Bockin is far from struggling for playing time as a freshman. She’s forcing her way onto the field.
“I’m super glad I came here,” Bockin said of Minnesota. “Right away, it felt like home.”
Delete Image
Align Left
Align Center
Align Right
Align Left
Align Center
Delete Heading