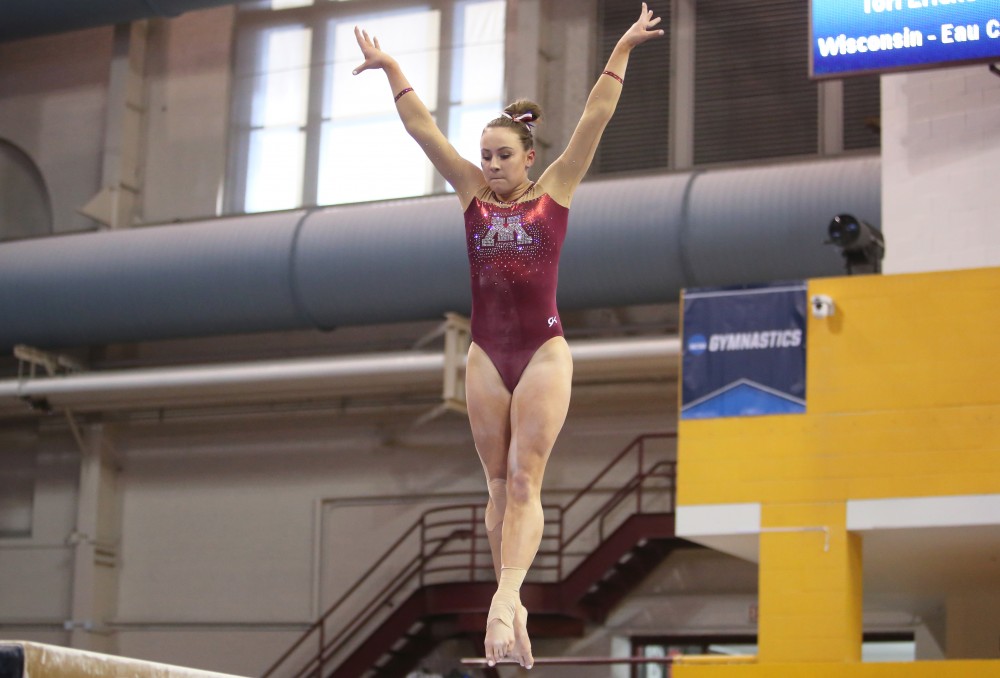 Lexy Ramler competes on the balance beam at the regional NCAA gymnastics championship on Saturday, April 7, 2018.

Freshman Lexy Ramler was anxious heading into her first NCAA Regionals on April 7.

“When I get nervous, you have to breathe through it and focus in on what you need to do,” Ramler said.

Her nerves, however, didn’t get in the way of her performance.

She qualified for the NCAA championships in the regionals for the all-around, as the only Minnesota gymnast to qualify this season. The freshman heads to St. Louis this weekend after earning a score of 39.500 in the all-around at the Minneapolis regional.

On Tuesday, Ramler worked out at Peik Gymnasium on campus before leaving for St. Louis. She said, heading into the championships, she is going to focus on having fun.

“I normally perform better,” Ramler said about focusing on enjoying events. “I’ve noticed that if I think about it too much, I get nervous and stuff gets shaky.”

The NCAA championships won’t be Ramler’s first high-stakes competition. Ramler has not only performed in the Big Ten and NCAA regionals, but she also won two Junior Olympic gold medals. In 2016, Ramler was the all-around champion at the L’international Gymnix Challenge.

Marlene Ramler, her mother, said she has worked hard to get to this point in her career.

“She’s worked for years training as an elite [gymnast],” Marlene Ramler said. “That level of training puts you in these environments that she’s currently in. These aren’t new environments, per se.”

Minnesota’s failure to qualify for the NCAA championships this year made it the second consecutive season it has missed the cut. The Gophers last competed at the NCAAs in 2016, finishing 12th overall.

“[Ramler] has learned a lot about what it takes … to be as good as she wants every single weekend,” Hansen said. “That’s a learning process for freshmen.”

“She enjoys those environments,” Hansen said. “She tries to put herself in those positions, so when it comes time to compete in those big meets, it feels like she’s done it before and has been there before.

“It’s exciting for her to be on that podium. She should feel comfortable,” Marlene Ramler said. “We’re excited to see her. It’s a new venue.”