Added depth from three newcomers in the circle has given the Gophers a boost. 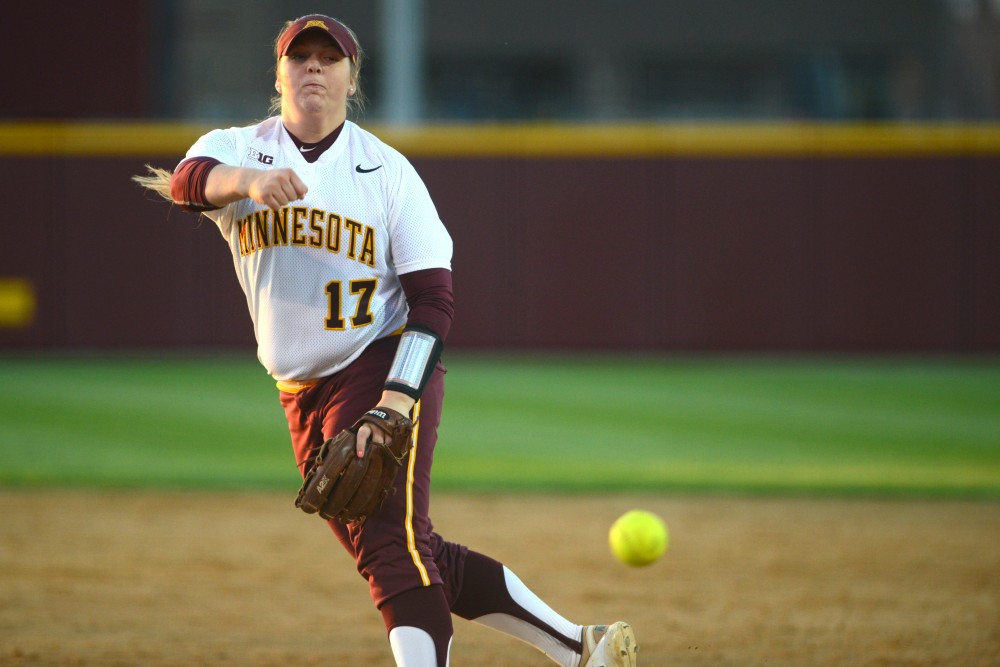 Tori Finucane admits the thought of joining a new team was a bit intimidating at first.

The senior pitcher transferred to Minnesota this year from Missouri, where she was a two-time 21-game winner and SEC Freshman of the Year in 2014.

“I think it was more scary than anything,” Finucane said of her transfer. “[My thought was] ‘If I do transfer, I have one last shot [to play].’”

She joined a changed pitching staff from last season. Although three freshmen have seen action in the circle so far this year, pitching has turned into perhaps the No. 7 Gophers’ greatest strength through their program-best 18-0 start.

“I think we’re deeper than we’ve ever been,” said head coach Jessica Allister. “The talent level of our staff is very high right now … we’re getting great starts, and we’re getting players closing things down.”

While the Gophers lost three of their four pitchers from last season, they returned ace Sara Groenewegen, who has more than lived up to expectations.

Groenewegen is 9-0 with a 0.50 ERA and 72 strikeouts in ten appearances, and she leads the Big Ten in opponent batting average, ERA and victories.

During last weekend’s tournament, she took a perfect game into the sixth inning against then-13th ranked LSU — a performance which garnered her Big Ten Pitcher of the Week honors for the second time this season.

While the senior duo of Finucane and Groenewegen have led the way, a pair of freshmen have also logged significant innings for the Gophers.

Amber Fiser has provided a crucial third quality arm in the starting rotation, with a 3-0 record through seven appearances. Her performance as a rookie allows the Gophers to keep Groenewegen and Finucane fresh each weekend – a crucial element in a long season.

Fellow freshman Carlie Brandt — a utility player — has proven herself a reliable reliever in her first year of college softball. Brandt has pitched five times this season, all in relief, and has conceded just two earned runs, holding a 3-0 record of her own.

“The transition to college ball is hard,” Allister said. “I think [the veterans] have shown [the freshmen] what it looks like to put in the work that is necessary.”

For Finucane, what was once a daunting transition has, in hindsight, been smooth.

After a rocky first two weekends, she has rebounded to hold an ERA of 2.50 over six starts with an unbeaten record of 3-0.

The culmination of her transition came in Baton Rouge, where she threw a complete game one-hitter against Florida Atlantic. She racked up 124 pitches in the Gophers’ 4-1 victory.

“It’s probably been one of the easiest transitions of my life just because of the people I’ve been surrounded by,” Finucane said. “I couldn’t have been put in a better place for [my] last shot [at college softball].”