Politicians use social media to engage their constituents. 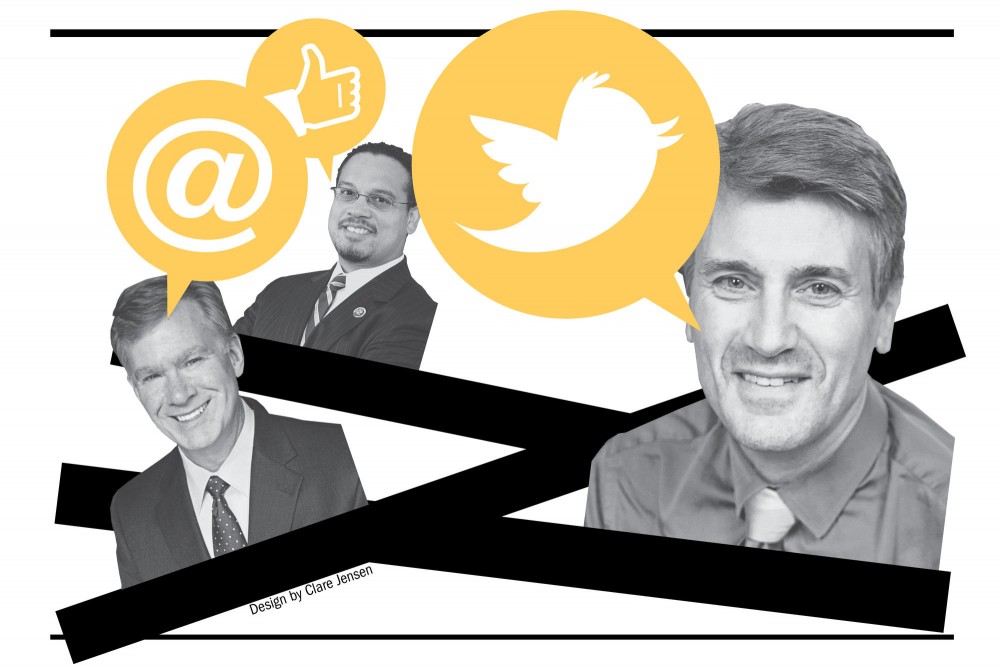 Politicians around the country are increasing their use of social media to engage constituents in a new and personal way.

On Jan. 30, President Barack Obama participated in a Google Plus âÄúHangout.âÄù In the live video chat, Obama answered questions submitted through YouTube videos and interacted with five other people, Politico reported. The event came as a follow-up to his State of the Union address.

The presidentâÄôs use of social media reflects a growing trend among politicians âÄî as it becomes more prevalent and mainstream in U.S. culture, politicians are hoping to take advantage.

From the mayors of both Minneapolis and St. Paul to the 60-plus state legislators on Twitter, Minnesota politicians have found a new way to connect with constituents.

âÄú[Politicians] are using social media for fundraising and organization tools for events, in addition to pushing out campaign messages,âÄù said Heather LaMarre, an assistant professor in the University of MinnesotaâÄôs School of Journalism and Mass Communication who specializes in social media and politics.

Many people are excited about the potential social media has in connecting voters and students to their representatives. However, LaMarre said that in local politics, social media can be âÄúcounterintuitive.âÄù

âÄúYou think social media levels the playing field and gives an advantage to the underdog who has less resources,âÄù she said, but a campaign needs âÄúhuman capitalâÄù to keep the profiles up to date.

âÄúThe advantage goes to the candidate again who, unfortunately, is well-funded,âÄù she said.

LaMarre said she believes social media can serve as a gateway to political involvement for some college students, but at the end of the day, they still need some political interest in order to follow political news.

âÄúFor those who have a minimum level of interest or who start paying attention to it, I think it definitely has the power to energize young people,âÄù she said. âÄúBut it doesnâÄôt necessarily bring new people in, because why would you fan a political page instead of a sports page or entertainment page?âÄù

Despite its limitations, LaMarre does believe that interactive media in the digital age will be a âÄúgame-changer.âÄù

âÄúItâÄôs not just social media. ItâÄôs sort of the fusion of all of the kinds of interactive media,âÄù she said.

âÄúVoters are changing the game because they are getting actively involved,âÄù she said. âÄúThe power is shifting from elite to the public again.âÄù

Kahn uses Twitter less to âÄútweetâÄù and more to stay up to date.

âÄúI find that I can get a quick read on the important news that I should be following by just going to Twitter in the morning and throughout the day,âÄù Kahn said. âÄúI follow some people who are Republican legislators. ItâÄôs kind of nice to see what they are up to.âÄù

Kahn more often responds to tweets than creates her own, but does all her tweeting herself.

While Kahn enjoys some of the benefits of Twitter, she hopes that âÄúour lives are not confined to conversation in 140 characters.âÄù

âÄúBefore I started doing Twitter, I could reach out to hundreds of people through an email. Now, I can send a 140-character message to almost 25,000 people anytime I want to.âÄù

Despite the responsibilities that come with being a U.S. representative, Ellison still does all his own tweeting. Occasionally, he will direct a staff member to make an announcement via Twitter, but âÄú97 percent of the time, thatâÄôs me pushing the buttons on the keyboard,âÄù he said.

Ellison said he receives feedback through Twitter that can shape his views on topics. For example, the controversial piracy bills SOPA and PIPA were first drawn to his attention through social media.

Ellison said itâÄôs important to learn the ways of Twitter before diving in, and his first lesson is to âÄúnever tweet in an extra-emotional state.âÄù

Ellison learned to restrain his fingers on Twitter one time when he expressed his disagreement with fellow Rep. Michele Bachmann, R-Minn. over something in a committee hearing by tweeting about it.

âÄúI regretted doing it because it wasnâÄôt the right format or venue to express that point of view,âÄù he said.

While Ellison doesnâÄôt recommend reacting in anger to what people say via social media, he does think sometimes itâÄôs important to respond to people who disagree with you.

âÄúTheir disagreement with [me] may give me an opportunity to really sort of illustrate the other side of an important public question,âÄù he said.

Ellison does have goals when he starts typing.

âÄúWhat IâÄôm aiming for is that when a tweet appears in my name, the people will know that itâÄôs me, that itâÄôs worth reading and that whether they agree with me or not, it is an issue of public concern,âÄù he said.

He recommended that anyone in politics maintains a social media presence to stay engaged with the public.

Minneapolis Mayor R.T. RybakâÄôs time in journalism and technology has made his use of social media feel natural.

Rybak said his tendency to âÄúlive out loudâÄù didnâÄôt hurt either.

Since assuming office, Rybak has appreciated the usefulness of social media. He compared it to door-knocking from a laptop or iPad.

âÄúI just love the idea of being in a public job where I work for people and being able to have immediate two-way communication,âÄù he said.

Rybak does all his own tweeting and enjoys the control that comes with social media.

âÄúA big part of what I do is to try to have an authentic voice about the city, and it just canâÄôt be authentic if itâÄôs somebody [else],âÄù he said. âÄúItâÄôs really nice to be able to get my message out unfiltered in the way I intended it.âÄù

Rybak appreciates the feedback he gets through Twitter, but recognizes that it is not reflective of the entire population âÄî âÄúI never consider it a poll. ItâÄôs a sliver of a certain part of the population,âÄù he said.

Even though Rybak uses Twitter for his mayoral position, at times he likes to reflect a more personal side via social media.

âÄúI tell people what restaurants I like, or some new movie I saw, or a book I read or an opinion on something the Twins should do,âÄù he said.

âÄúIâÄôm a mayor but IâÄôm also a person, and I try to be both on my social media.âÄù

St. Paul Mayor Chris Coleman has been using social media since his 2005 bid for office and has seen the use of sites like Facebook and Twitter explode ever since.

Coleman shares mixed responsibility with his communications department to keep his social media up to date.

âÄúItâÄôs changed the pace of this thing amazingly,âÄù he said. âÄúI have close to 5,000 Facebook followers. ItâÄôs a pretty solid communication strategy.âÄù

Coleman also serves as the second vice president of the National League of Cities. At its annual conference, he has arranged for some Google employees to teach elected officials about social media.

In the session led by Google, representatives will be educated on things such as âÄúhow to tweetâÄù or âÄúwhat a hashtag is.âÄù

âÄúI think that there is still a lot of practical learning with current technology that elected officials have to have,âÄù said Coleman.

âÄúPeople arenâÄôt always at their best when theyâÄôre kind of doing spur of the moment, snap broadcast statements,âÄù he said.

However, Winkler decided to jump in after seeing other politicians use social media effectively.

âÄúI realized that it really could be a good tool to help shape the political discussion.âÄù

Winkler, who does all his own tweeting, believes the advantage of Twitter is that it allows for unfiltered communication when engaging with public officials.

Winkler feels Twitter has a combative culture, with more of a debate style of communication.

With this culture and frequent confrontations, Winkler has learned to control what he says over social media outlets.

Winkler believes sites like Twitter are evolving but that the concept of using the Internet for interactive discussion in politics is here to stay.

âÄúAs an elected official or candidate, what youâÄôre trying to do is reach people with your message. [Social media] is a good tool for that.âÄù