A local furniture dealer works his magic to restore vintage pieces, but has a hard time letting them go. 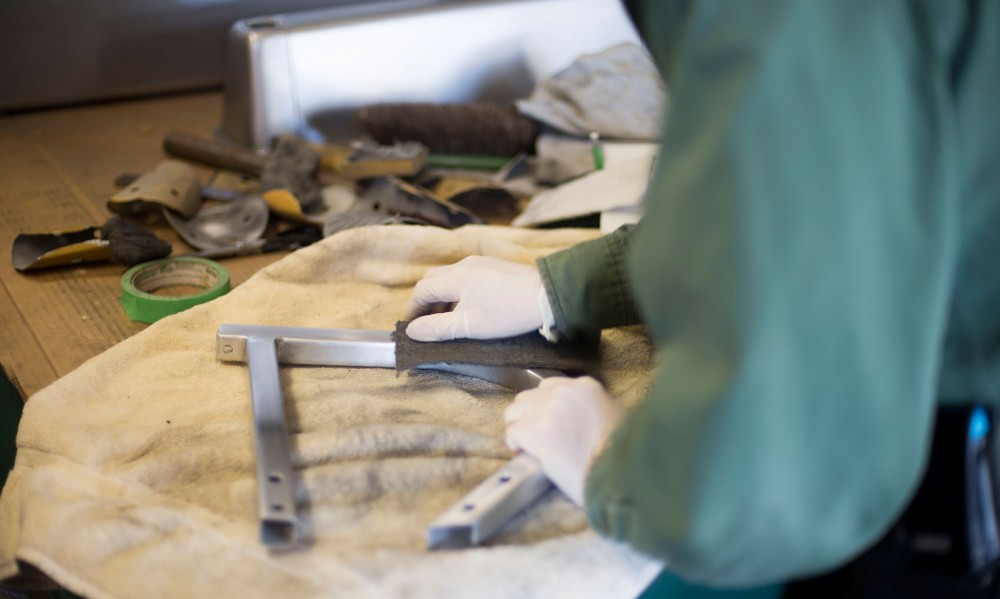 Past Present Future owner Steve Mogol polishes the arm of an old office chair Tuesday at his shop in Minneapolis.

The 85-year-old tan brick building just off East Franklin Avenue and Highway 35W looks virtually abandoned. Perhaps you’ve seen it from across the street at The Electric Fetus or while riding the 2. The three-story building used to operate as a 13-unit apartment building with multiple storefronts on the street level. But in the last 20 years, only a select few have been inside.

The only indications that the building isn’t completely deserted are a maroon business sign to the right of the main entrance and a short man with tightly curled gray hair and glasses who pops in and out from time to time.

Steve Mogol lives in one of the apartments on the third floor and operates his vintage furniture business, Past Present Future, inside his family-owned building. He uses the remaining 12 apartments, plus the hallways, basement and old shop spaces, as a 32,000 square foot storage unit for his furniture and random collections.

“Unlike most people, my stuff appreciates. What is one man’s junk is another man’s treasure,” he said. “There’re enough people out there that understand my treasures.”

The problem might simply be knowing where to look. The shop display windows are not exactly set up to attract customers. Instead, they reveal stacks of furniture, partially wrapped in shipping material, scattered among cardboard boxes and shelves lined with furniture parts and tools.

The only arranged window awkwardly displays a sturdy gray metal roller chair next to a baby blue two-drawer metal cabinet. One broken window is patched with a piece of plywood and duct tape, while others are boarded up entirely.

“I’m not open to the public that easily. I qualify everybody. It’s not easy to get in here,” he said. “I don’t even sell things to people I don’t like anymore. There’s hardly any negotiation with me. I know what everything is worth.”

Mogol is an offbeat entrepreneur with grandiose business visions, like renovating the property into a boutique hotel and opening up the “Mogol Museum of Industrial Design” in association with the Smithsonian.

He estimates that he might be a multi-millionaire on paper, but said he doesn’t have the cash flow to realize any of his dreams. Most of his wealth lies in assets: 15-odd semi-trailers, several storage units and an entire building all stuffed full of mid-century American industrial office furniture.

“We were the greatest industrial nation on earth, and that’s what I’m all about here. This is physical proof that it was made in America, it’s everlasting and timeless,” he said. “I’m paying homage to the workers and the designers that did this furniture.”

If his mission is to pay homage to the past, the metal chairs stacked to the ceiling and stuffed into a gutted apartment certainly look like a shrine in his vintage furniture mecca.

But the collecting doesn’t stop with the tank-like desks and credenzas of a bygone era. Vintage metal fans are stuffed into one room while lamps and lampshades are stacked in another. Mogol has a cabinet full of thermometers, a drawer packed with beautiful vintage leather wallets, another brimming with hand gloves and a small hallway overloaded with wastepaper baskets he has yet to restore. That’s “just the tip of the iceberg,” he said.

Mogol’s business is deeply rooted in the past, in more ways than he ever anticipated. He said sales have declined in part because he can’t keep up with technology to stay competitive.

“In the old days, when sales were good, my kill ratio for making a sale was one phone call. But now it takes more time for people to buy something,” Mogol said. “You have no idea how many emails go back and forth answering ridiculously stupid questions sometimes.”

While the point of Mogol’s business is to sell furniture, he skirts around the issue of which items are actually for sale. Many of his most valuable pieces are part of his personal collection.

Rather than wanting to sell his furniture, he has visions of using it in several elaborate business ventures of his own invention. He said he fully intends to start using all of those leather wallets, and each pair of gloves has a purpose.

His first recollection of wanting to salvage something was when he was 7 or 8 years old. His grandparents owned a wooden antique cabinet that he was fond of, and one day it was suddenly gone.

“I wanted that one day for myself. I was 7 years old. Who thinks like that?” he said.

Later on, he had an argument with his parents after they gave away some luggage. He retrieved it.