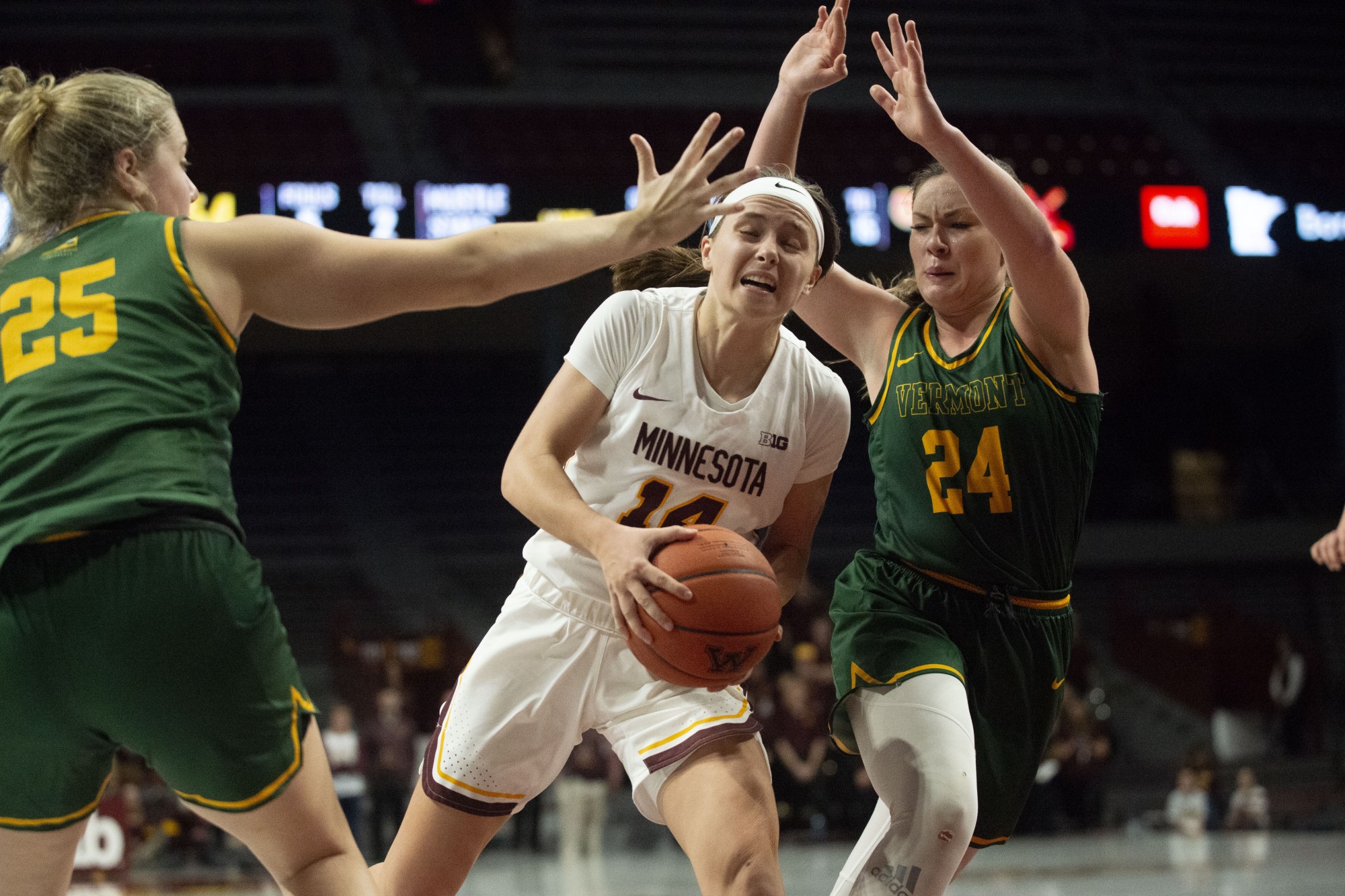 After losing to Missouri State five days ago, Minnesota women’s basketball improved in several areas on the court Sunday to beat the Vermont Catamounts 90-58 at Williams Arena.

In the first contest of the season, points were tough to come by in the first quarter as the Gophers scored only 13 points. Head coach Lindsay Whalen said after the loss that her team needed a better start to their next game. The Gophers responded well on Sunday, scoring 27 points in the first quarter against the Catamounts. Through three quarters of play on Sunday, Minnesota scored 63 points after only scoring 69 in Tuesday’s game.

Freshman guard Jasmine Powell came off the bench to provide a spark for the Gophers, leading the team with 19 points and four assists. After the game, Powell said the team did a better job of not rushing shots and playing within the flow of the game.

“Powell was terrific off the bench,” Whalen said. “She was poised, four assists, no turnovers, obviously the 19 points. When we have that spark and that punch, one: it’s fun to watch and two: it makes us a really tough team.”

Everything seemed to be working for the Gophers offensively. When Powell was not scoring, it was redshirt junior guard Gadiva Hubbard, junior forward Destiny Pitts or senior forward Taiye Bello hitting shots. Minnesota finished with four players who had double-digits in points.

In her second game back from a foot injury, Hubbard felt more comfortable in the game and helped extend the Gophers’ early lead. Ten of Hubbard’s 12 points came in the second quarter and she also added five rebounds.

“During that first game, I can say that I was nervous being that it was my first game back,” Hubbard said. “But I think this game, I became a little more comfortable with what I was doing and I think that showed in the first half. But I am trying to get completely back to how I used to play.

Pitts continued her success from behind the 3-point line, as she connected on three of her six 3-point attempts. Pitts finished with 16 points, five rebounds and three assists.  Bello contributed with 14 points of her own and led all players with 10 rebounds.

The Gophers also cleaned up their somewhat sloppy play from Tuesday, turning the ball over only five times against Vermont compared to 19 times against Missouri State. In their two games thus far, Minnesota has won the turnover battle 41-24.

MinnesotA is now 1-1 in the season as the Gophers continue their six-game stretch at home against non-conference opponents. This week, Minnesota hosts Milwaukee on Thursday at 12:00 p.m. and Arizona State on Sunday at 3:00 p.m.