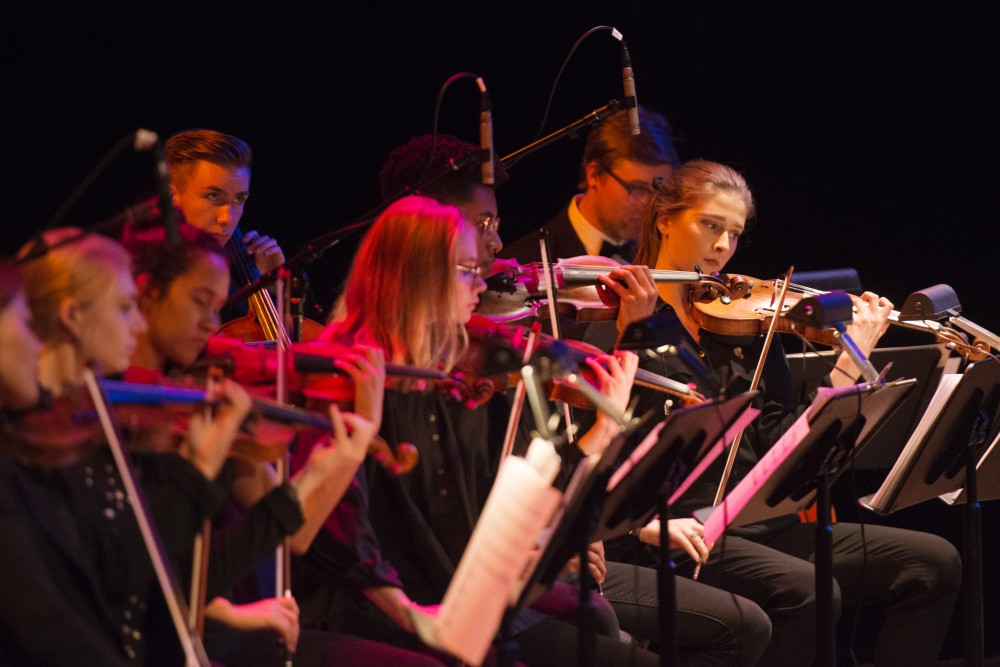 The chamber strings from the University Symphony Orchestra backed up St. Paul and the Minneapolis Funk All Stars as they opened for the ceremony for honorary Doctor of Humane Letters degree to Prince at Ted Mann Concert Hall on Wednesday, Sept. 26. An honorary degree is the highest award conferred by the University of Minnesota, recognizing achievements that have added to the betterment of society.

First and foremost, Cameron Kinghorn was a trumpet player.

He came to the University of Minnesota to pursue an instrumental music education degree, studying at the School of Music with trumpet professor David Baldwin and participating in Jazz Ensemble I under the direction of professor and director of jazz studies Dean Sorenson.

During his time at the University, Kinghorn experienced a musical awakening. Living in Minneapolis transformed Kinghorn, who was once just a kid growing up in tiny Circle Pines, MN.

He started a band with other students from the University jazz band, The Tasty Tones, during his sophomore year. They started playing around the University and — for the first time — Kinghorn was a lead singer and a trumpet player.

“That’s when I really started fronting – like my first time getting to front a group and realizing that I really love doing this and being in charge of the party,” he said.

Kinghorn graduated from the University in 2013, and has since been living his dream as a full-time musician. He currently fronts the band Nooky Jones, a group that NPR called “equal parts Stevie Wonder, D’Angelo and Prince.”

Over the years, Kinghorn always stayed close with his college jazz instructor, Sorenson.

Sorenson and his colleague Philip Hey, who directs the jazz combos, recognized Kinghorn’s talents and gave him opportunities to sing with the University jazz bands and jazz combos.

“Man, has it been a blast to watch him grow as a vocalist. I like to say in college he was a trumpet player who sang, but now he’s a real singer,” Sorenson said.

In August, Sorenson gave Kinghorn a call, asking him if he wanted to sing for a University event honoring Prince.

At that time, Kinghorn had no idea that Prince’s sister, Tyka Nelson, would be part of the ceremony.

Awarding Prince an honorary Doctor of Humane Letters degree had been in the works long before the musician’s untimely death in 2016.

Last Wednesday’s award evening, produced by Sorenson, was a mélange of music and official ceremony proceedings.

St. Paul and the Minneapolis Funk All Stars – the fancy name for Prince’s former bandmates – played on the Ted Mann Concert Hall stage. Kinghorn shared the title of lead vocals with St. Paul Peterson, the former lead singer of the Prince-produced group The Family.

The All Stars were backed up by the University’s Jazz Ensemble I and chamber string players from the University Symphony Orchestra, with Sorenson as the conductor for both ensembles.

Together they played Prince staples like “Let’s Work,” a pared down string-accompanied rendition of “Nothing Compares 2 U” with Peterson on vocals, “I Would Die 4 U” and, of course, “Purple Rain.”

Nelson was there to accepted the award on her brother’s behalf. Fighting back tears, she still managed to smile when University officials presented the award.

For the final musical number, “Purple Rain,” Nelson sang the lead vocals, channeling the familiar cadences of her late brother.

As much as the night was devoted to praising Prince for his contributions to the community, including his genre-bending music and his accomplishments in the industry, the stage also became a space for University students to have an invaluable musical experience with true Twin Cities greats.

This didn’t escape Nelson. “I was going to make this brief, but after looking at all of the wonderful children back there … this belongs to them,” she said as she accepted the award, also gesturing to Peterson and the other members of the All Stars.

“My main goal for this whole thing was that I wanted our students to interact with those pros, to give them a taste of what it’s like to make music at that level,” Sorenson said.

Sorenson was a proud teacher Wednesday, commending his students old and new for helping to create what he called a “magical night.”

He lauded Kinghorn especially for his performance.

“To sit in with those seasoned veterans last night and just own it the same way that they owned it is a real testament to his maturity as a performer,” Sorenson said.

For Jellybean Johnson, who grew up with Prince and played guitar at the event, sharing Prince’s music with University students and an audience of fans was long overdue.