Freshman libero C.C. McGraw has been playing well for the Gophers' this season. Behind the scenes, her mother had a big part in getting her here. 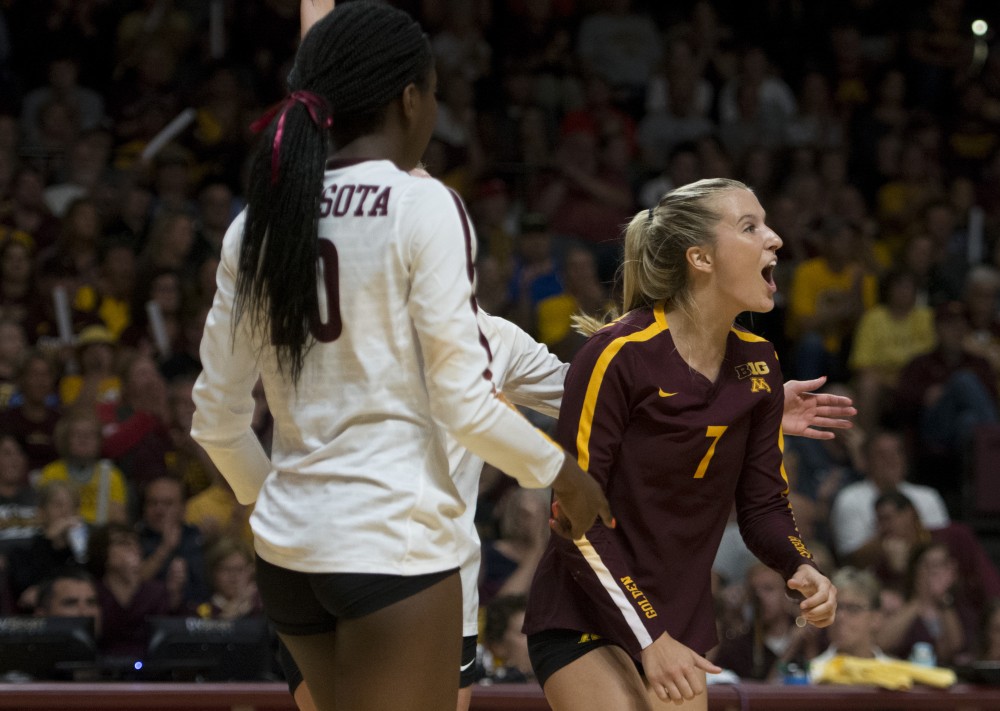 CC McGraw celebrates a scored point at the Maturi Pavilion on Wednesday, Sept. 19. They defeated Penn State for their Big Ten opener in straight sets.

Halfway through her freshman season on the Gophers’ volleyball team, libero C.C. McGraw has finally achieved a life-long dream of being a Minnesota volleyball player.

“It’s been my dream ever since I was a little girl,” McGraw said.

C.C. McGraw received an offer during her freshman year at Prior Lake High School. McGraw’s mother, Heather, said the path for her dream became possible in seventh grade.

“She went to a Gopher camp and was told by one of the coaches if she continued to develop as they thought she would that she would become ‘Gopher good,’” Heather McGraw said. “That moment lit the ultimate spark in her.”

Although the dream was possible, C.C. McGraw knew she had to work hard to obtain it.

Heather McGraw said her daughter’s drive to become a Gophers’ volleyball player was apparent — she always wanted a volleyball in her hands and regularly broke their garage door lights while practicing at home.

“She was perpetually asking anyone to go out in the yard and pepper with her,” Heather McGraw said.

Although C.C. McGraw’s dream was to become a Gophers’ volleyball player, Tim McGraw, her father saw her as a three-sport athlete.

“C.C. has always been really athletic,” Heather McGraw said. “Her dad really wanted her to be a three-sport athlete.”

But the other two sports were not C.C McGraw’s dream — volleyball was. This issue brought a tension between Tim and Heather McGraw that forced Heather to “go to pretty extensive lengths.”

“[My mom] definitely went out of her way for my volleyball career,” C.C. McGraw said. “I’d definitely say that it pushed me a ton to make her proud.”

C.C. McGraw joined the Gophers last spring after she graduated early from Prior Lake, just as she planned when she was 14 years old.

“She told me when she was 14 that she was going to graduate early,” Heather McGraw said. “At the time, I wasn’t super comfortable making that decision, but I allowed her to set up her academic schedule to give her the opportunity to graduate early when the time came.”

“Instantly, I knew I had a lot of work to do,” she said. “The U’s culture really focuses on the process and not the result, so making my entire game simpler was hard.”

Helping her transition were teammates Sara Nielsen, a sophomore setter, and Alice Zeimann, who lived in the same building.

“We would just invite her to do things with us,” Nielsen said. “C.C. would always come over to just talk and hangout.”

A major motivator for C.C. McGraw was knowing her mother would be in the crowd

“I’ve been playing since I was five years old, and my mom’s been my biggest fan the entire time,” she said.

The freshman libero has had success in multiple areas on the court this season. She’s 11th in the Big Ten in digs with 167 and is second on the team in assists with 56.

C.C. McGraw said it was hard transitioning to the college level defensively because of the increase in speed of play.

“I’m constantly stepping outside of my comfort zone because these aren’t the types of defensive moves I’d usually make, but I’m having to,” she said.

Although C.C. McGraw has been solid on the court, her favorite part of being a Gopher has been playing in front of her family.

“It’s a pretty incredible feeling to know I have [my family] right there by my side every step of the way,” she said. “Knowing I have them here at every game is a pretty remarkable feeling.”