The Olympian is leading camps for aspiring hockey players. 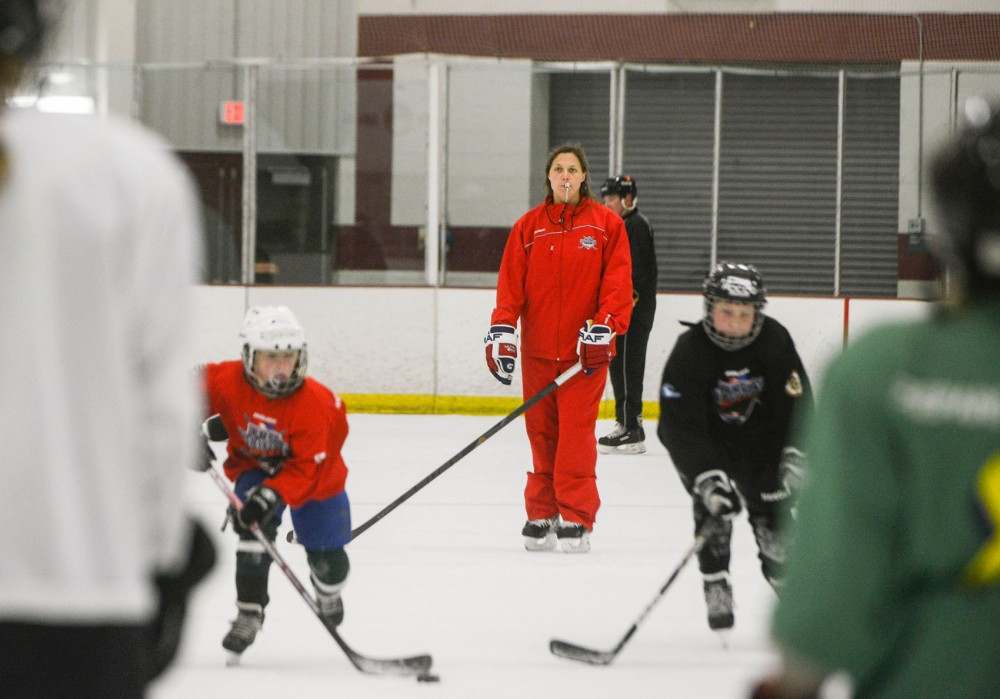 Olympian and former Gophers women’s hockey player Megan Bozek coaches kids at a Pro Ambitions camp at Schwan Super Rink at the National Sports Center in Blaine. Bozek spends her summers coaching for Pro Ambitions at camps around the country.

When it comes to hockey, it’s safe to say Megan Bozek knows what she’s talking about.

The defenseman captained the Gophers to a NCAA title in 2013 and won an Olympic silver medal in 2014 for Team USA.

Bozek was back in Minnesota last week as part of a multi-state coaching tour for Pro Ambitions Hockey.

Despite her credentials, Bozek still has to prove herself on the ice to the groups of up-and-coming hockey players.

“I think [the boys] don’t trust a girl right away, that’s for sure,” she said. “But once they get to asking questions and … I give insight on something, then I think I earn their respect from that.”

Bozek first began working for Pro Ambitions six summers ago and has worked there since.

As an Illinois native, Bozek has mainly spent time working around the Midwest.

This summer, however, she’ll be all over the country.

In addition to Minnesota, Bozek has stops in Massachusetts, Maine and New Jersey, among others.

“Traveling from state to state takes a lot out of you, but it’s awesome,” she said. “I love working with kids, so I really enjoy it.”

Bozek said the camp focuses on battle drills, and the campers are on the ice for four hours per day. They also participate in dry-land activities.

“It’s pretty long and taxing on the kids after a week of it,” she said.

It’s also taxing on her, as she has to fit in training between the coaching and traveling.

That usually means waking up before the sun rises to hit the gym before work starts.

After that, Bozek makes the transition from player to coach.

Though she spends most of her time working with girls, Bozek also works with the boys at the camps.

In Minnesota, that included Wanda Belich’s son, Nicholas, who made the drive from Hibbing, Minn., to participate in the camp.

Belich, who spent time watching her son on the ice during camp, said she liked how thorough and informative the coaches were.

“[Megan will] pull [him] off to the side and work with him [on] whatever he needs to be worked on. It’s really beneficial,” Wanda Belich said.

Camp co-director Tom Orr said the campers were excited to have Bozek as a coach.

Orr said the company tries to standardize camps across the country, but coaches add their own twists and knowledge, and Bozek’s experience often comes in handy.

“I know that they’re interested in where I’ve played [and] what I’ve done, so I try to give them as much motivation and confidence as I can … because I used to be in their position once,” Bozek said. “As long as you work hard and you battle out there, good things will come of it.”