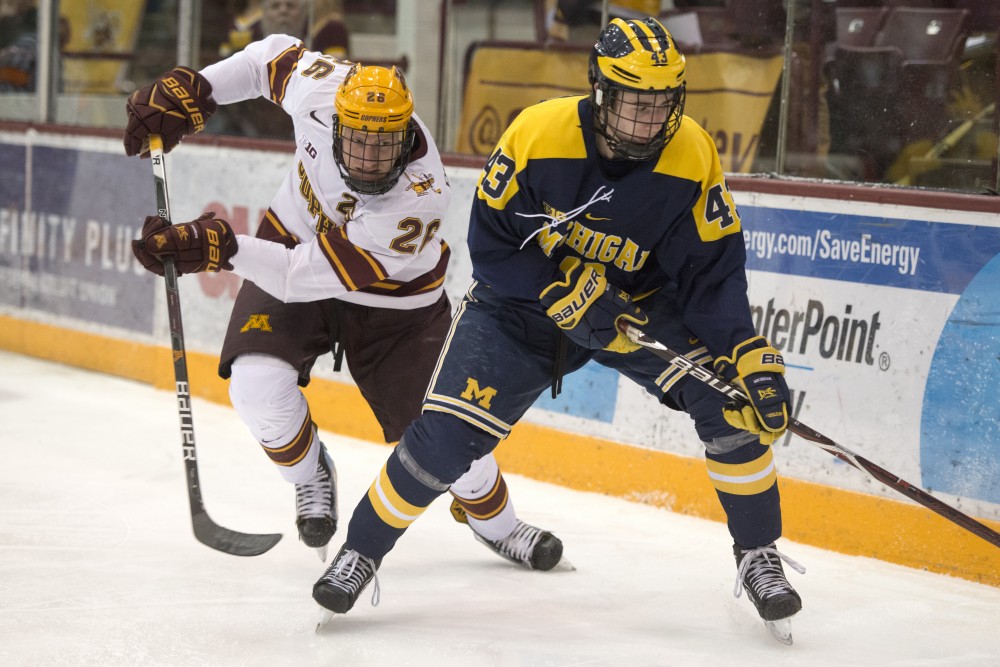 Junior forward Darian Romanko chases after Michigan forward Quinn Hughes during a game at 3M at Mariucci Arena on Jan. 12, 2018.

The defensive ability of the Gophers has been a point of emphasis this season.

The defensive-minded forwards, Darian Romanko and Jack Ramsey, have four regular season games left this season to make an impact.

“Romo and Ramsey, they play together, they kill penalties together,” head coach Don Lucia said. “They don’t get a lot of the limelight, but that’s one of the reasons why, late in the game, they were on the 5-on-3.”

The Gophers penalty kill has been one of the top units in the country this season, with help from the two forwards. The penalty kill is ranked 15th in the nation, as they have kept over 83 percent of the opposing power plays scoreless.

The Gophers have historically relied on offense to win games;  until this season, that has been the story for Ramsey and Romanko’s career. In their freshman season, Minnesota ranked 11th in the nation and in their sophomore season the Gophers ranked fifth in the nation in team offense.

This season, Minnesota ranks 38th in total offense, in the bottom half of teams. With the lack of offense, Minnesota’s most defensive-minded forwards have kept up their development of shutting down other teams’ offenses.

“I feel like I’m starting to work a little bit better with Jack,” Romanko said. “It’s just that awareness we have with each other on the ice.”

Romanko said that, with Minnesota’s offensive struggles, the team has had to take on a more defensive style of play. He said that that’s the way he played in juniors and that he is used to the style that the Gophers have been forced to play, with a lack of offense.

Now with Minnesota, Romanko hasn’t been the offensive star, but instead a stalwart of the Gophers defensive structure. Romanko made an impact on the offense when he scored the game-winning goal in Minnesota’s victory over St. Cloud State this season.

“That was definitely up near the top [of my best hockey moments],” Romanko said. “That game against St. Cloud, getting the game winner against the No. 1 team, that’s definitely a big moment.”

Besides his increase in offensive production this season, Romanko is back with Ramsey after the two players started the season on different lines.

The two forwards are on the penalty kill together and, as other lines were shifted around in recent weeks to find more scoring, the “trench line” stayed intact. The forward duo got the nickname “trench line” from their gritty style of play, keeping pucks to the wall and playing primarily in the “dirty areas,” Romanko said.

“We take pride in being 100 percent on the [penalty kill],” Ramsey said. “I think coach has instilled his trust in us going out against top lines [for] the other team.”

Romanko and Ramsey have been playing together for three seasons and, thanks to Lucia’s trust in the two, they have gotten more playing time, including time on the power play in the last game against Wisconsin.

The two will be counted on in the coming weekends with Minnesota’s regular season dwindling to an end, especially against two offenses that are in the top-15 in the nation with Penn State and Ohio State.

“They do have that firepower,” Romanko said. “I feel like it’s going to be a good test.”