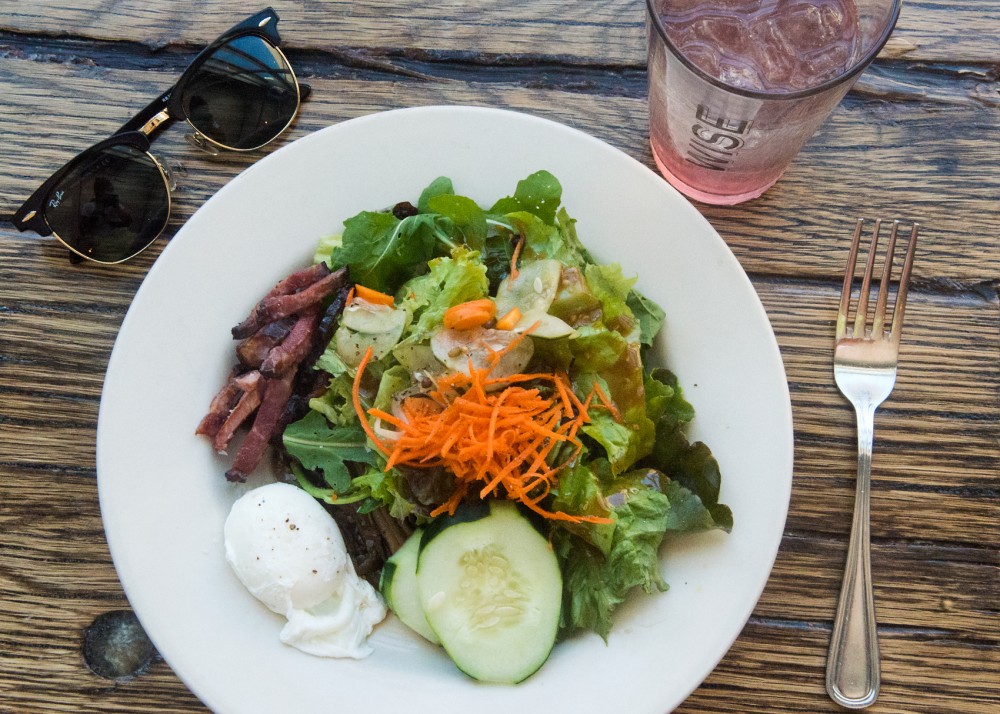 Summertime in the Midwest means thriving fields and colorful plates.

At a farm-to-table restaurant, it means fresh eggs and — since the season is now over — hopefully no asparagus in late July.

I took to the Twin Cities for a full day of farm-to-table dining at a few of the places that put (natural) stock into those three pretty words.

Seward is no doubt the patron saint of neighborliness, and their love of community is fully demonstrated at Birchwood.

A list of organic farms in Minnesota, Wisconsin and Iowa — where ingredients are sourced — is listed on the cafe’s website.

I tried one of the location’s most famous offerings: the savory waffle. The waffle itself was made up of green beans, quinoa and feta. Each section was topped differently — blueberry chutney, lemon dill butter, bacon lardoons and a sunny-side-up egg. Maple syrup and powdered sugar were also provided.

For a dish comprised of green beans, it tasted more mainstream than one would think. All toppings were excellent, but I liked the mixture of chutney and waffle best.

Not knowing how filling the savory waffle would be, I decided to add a little sweetness to my breakfast. I ordered a fresh mint brownie from the ever-changing pastry case. The bar’s filling was suffused with the taste of fresh mint; flakes of herb added color and a touch of earthiness to the chocolate. The brownie paired perfectly with a cup of Peace Coffee’s Birchwood blend — a decadent dessert.

With a kitschy-chic interior, vintage marquee-style sign and plenty of flowers and animal statues, Wise Acre is a blogger’s paradise; it has captured the down-to-earth vibe so many nosheries covet. One waitress wore a Kingfield Farmers Market shirt and Haflingers clogs — refilling glasses with triple-filtered water as patrons politely pretended their food photography had not been interrupted.

Wise Acre gets 75 to 95 percent of its ingredients sourced directly from its own 100-acre farm — Tangletown Gardens — in Plato, MN.

I tried all three daily specials: a house-made blueberry, aronia, rhubarb and basil soda, a chilled spring pea soup and a “taste of Asia” salad.

The soda was lovely — the natural separation of homemade syrup and tonic water made it possible to choose the desired flavor-intensity level of each sip. The flavors were complimentary and refreshing — a little avant-garde, but nothing disgraceful when what you really want is a soda.

As for the salad, sesame tamarind vinaigrette was ladled carefully over a variety of farm greens, paired with braised green beans, a poached egg and bacon.

The salad wasn’t necessarily reminiscent of Asia; instead, it tasted like a nice evening on a hobby farm. A lesson in menu creation: missing the mark can be endearing.

The soup was light in flavor. The whole peas at the bottom were a tad mushy, but it was nice in consistency, overall. The pale green color —Pantone 2274 UP, to be exact — was fodder for room-painting inspiration alone.

Having opened in 2002 as a pioneer in the farm-to-table movement, Heartland is considered by many as the quintessential farm-to-table dining experience. The restaurant is never more than two steps away from actual connections with its farmers.

Ingredients come solely from small family farms and artisanal producers. According to the restaurant’s website, mainline purveyors are shunned.

The small menu is made up of two tasting options — the flora and the fauna — and a number of a la carte selections.

Heartland’s fare is art — not in an “I have to take a picture” way, but in a “dive right in and savor every bite” manner, because this is a meal you’ll remember forever.

The gnocchi was the highlight. It melted in your mouth, bearing no relation to the microwaved Olive Garden variety.

Heartland’s head chef and owner Lenny Russo is an expert in the culinary craft — adamant people appreciate, and pay attention, to what they’re putting in their bodies.

“If you’re a consumer, you need to inform yourself,” Russo said. “You don’t need a dossier or the name of the cow, but it’s helpful to ask ‘grain-fed or grass-fed?’ Do you know anything about its diet? Where it was raised or came from?”

Russo doesn’t necessarily like the “farm-to-table” label, though. He believes in the concept, of course, but the logic is confused — ultimately, everything starts on a farm and ends up on the table.

Farm-to-table dining is often pricey, but putting good things in your body pays off in the long run.

“You’re either paying for it at the cash register or at the pharmacy at age 70, wondering when you’re going to die already,” Russo said.

Patrons can do their part to support true farm-to-table restaurants — and the farms growing the produce — by researching the restaurants they frequent, requesting information and paying attention to what’s in season.

If there’s an adage to express locally sourced eating in Minnesota, Russo has surely coined it: “If there are oranges on the table, that’s fucked up.”