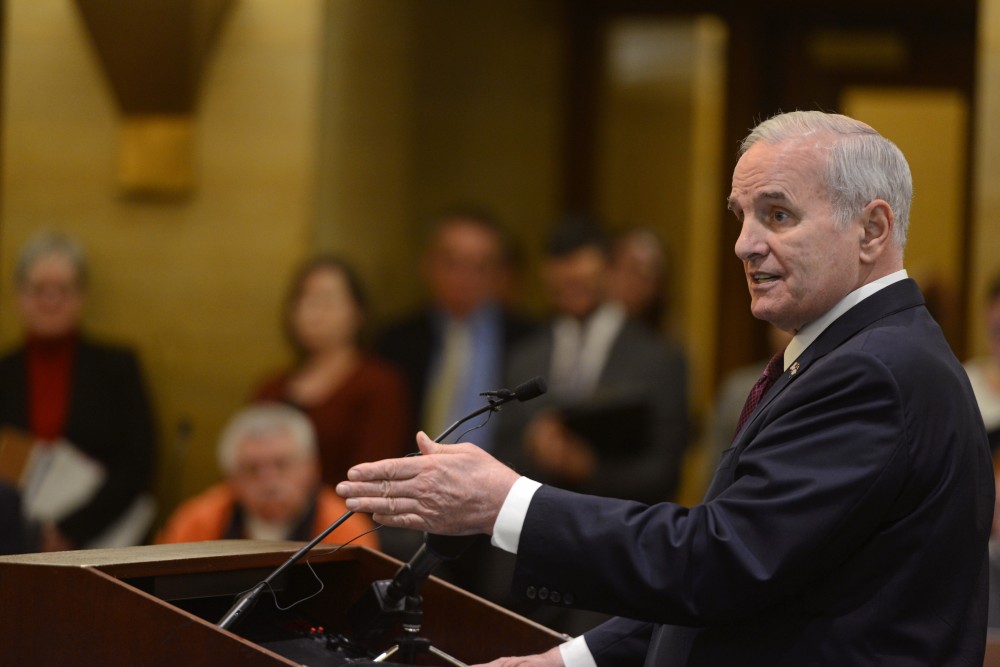 Governor Mark Dayton answers questions during a press conference about Minnesota's budget at the Capitol in St. Paul on Tuesday, Feb. 28, 2017.

Recently passed spending bills by the Minnesota Legislature would provide significantly less state funding for the University of Minnesota than requested by the school.

The House higher education omnibus bill, passed by a 77-53 vote Tuesday, recommended the University receive $22 million of its requested $147.2 million biennial budget increase. The Senate’s bill, which was passed in a 36-31 vote last week, would provide about 20 percent, or $29.6 million, of the University’s request

Some Democratic lawmakers criticized the bills while Republicans defended them, saying millions more state dollars have been allocated for higher education.

In an interview Wednesday, Gov. Mark Dayton said he’d veto the current higher education omnibus bills, pushing legislators to come closer to the $96.8 million he recommended for the University in January.

“I’m going to hold out for the numbers … in my budget because I believe those are appropriate and necessary,” he said. “With a healthy budget surplus, there’s no justification for not doing what we need to do for … areas like higher education, which is so critical to our future.”

While University President Eric Kaler previously said tuition could increase even if the school received its entire request, Vice President for University and Government Relations Matt Kramer said in a Tuesday press release that the school would freeze tuition for two years if it received at least $128.6 million from the state.

Under the House and Senate bills, a tuition freeze for Minnesota State schools would be fully funded.

In the press release, Kramer said he was unsure why Minnesota State received money to freeze tuition while the University of Minnesota did not.

“It’s really disappointing … the two main educational institutions in this state, the University of Minnesota and Minnesota State, were always treated with some degree of parity,” Kramer said in an interview Wednesday. “On another basis though, I look at these and it’s just part of the process. The legislature … [has] to get it approved by the governor, they also have to reconcile pretty significant differences between the House and Senate positions.”

The $128.6 million threshold was released after the Legislature asked what it would take to keep tuition flat, Kramer said.

“[The University] may have sent it, but it’s a little bit late,” he said.

University administrators and members of the Board of Regents started discussions over possible tuition increases for next school year during a March meeting. Under the current budget framework, tuition would jump by 10 percent for some students.

Initiatives to expand University medical services, fund research and support the Bell Museum of Natural History, among others, were included in the school’s budget increase request.

“Funding for higher ed is under attack across the entire country, and this bill is no different,” she said at the floor hearing.

At the floor session, Pelowski said the bill ignores the University’s core missions and could result in tuition hikes for students.

“This bill tries to do a great many things,” he said. “It just doesn’t do any of them very well.”

“When they talk about disinvestment from higher education, this is a great example,” he said.

The House omnibus bill will now head to the Senate before a conference committee works out the differences between each bill’s allocations. Any final bill would have to be signed by Dayton.

Rep. Bud Nornes, R-Fergus Falls, chair of the House higher education committee, said in an interview that although there is still work to be done, he hopes the bill will pass. If vetoed, legislators would “have to go back to the drawing board.”

“Since … I’ve been chair of [the] higher education [committee], I’ve never had [an omnibus bill] vetoed yet, and I hate to say that because it might be bad luck,” he said. “We generally work out the details before it’s over.”