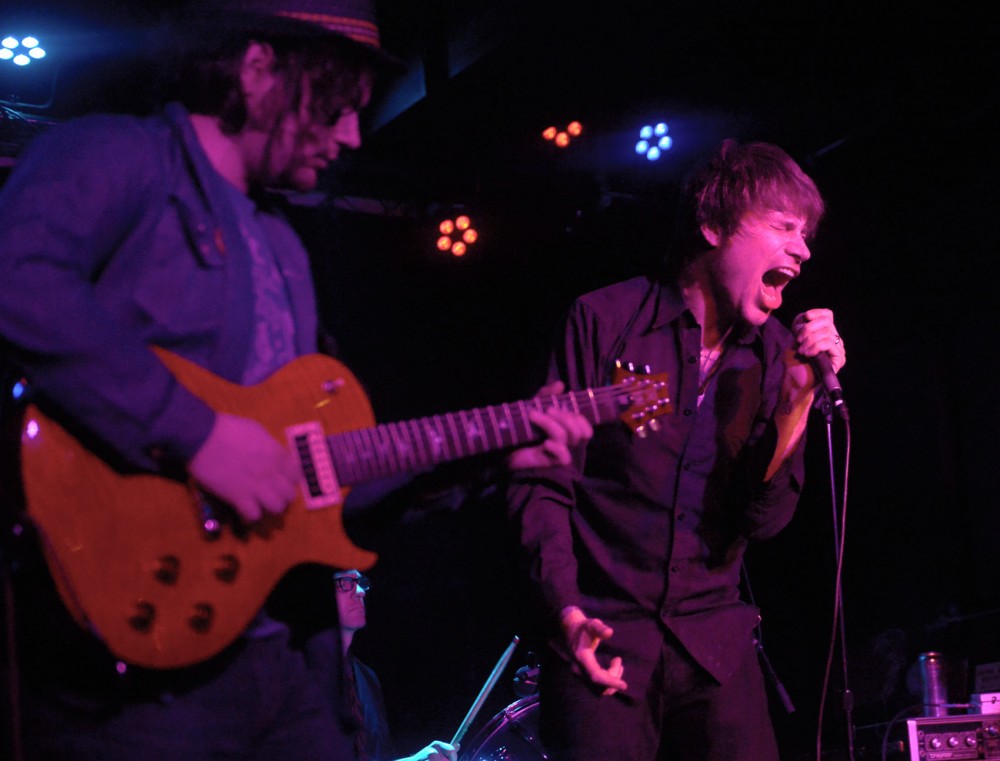 Narco States vocalist Michael MacBlane-Meyer sings with his band at the Turf Club on Monday. Narco States, a psychadelic garage-rock punk band, is passionate about the Minnesota garage scene and strives for unpredictable live performances.

by Mary Reller
A table of five men in skinny jeans and pin-embellished jackets bickered because one band member arranged to meet at a tavern they’d never been to.
A couple of baseball teams sat nearby, and cartoony cardinals played various sports on the wall murals.
Narco States is drawn to obscurities, so it’s not a surprise that the punk rockers sat at a friendly sports bar.
“I think a lot of things that became mainstream lost their edge, and we like an edge on things,” vocalist Michael MacBlane-Meyer said. “I like the edge to be dirty and flawed.”
MacBlane-Meyer collects antique organs, but he doesn’t know how to play them, so around 2012 he placed an ad on Craigslist looking for someone to play it in his band.
Organist Aaron Robertson replied to the ad at the same time MacBlane-Meyer answered guitarist Nate McGuire’s Craigslist ad seeking a band.
Soon after, Robertson contacted his high school classmate Nick Sampson to play bass, and they formed the clangy, mid-’60s-inspired garage rock band.
Last November, they found drummer Erik Johnson.
“We’ve gone through, like, five drummers since we started,” MacBlane-Meyer said. “Drummers are a dime a dozen on Craigslist.”
Growing up influenced by punk bands that were “one with the audience,” the band aims to treat their crowds to memorable performances.
At one Narco States show at the Hexagon Bar, MacBlane-Meyer climbed into the suspended ceiling and flipped himself upside down so that he was hanging from his feet.
Parts of the ceiling came down on the band and their equipment, Robertson said.
“We want to provide something that people will [actively] experience as opposed to passively experience,” Johnson said. “You should always feel a little uneasy, like something is going to happen.”
After that show, MacBlane-Meyer was concussed and tore his rotator cuff, but the stunts haven’t stopped. A Narco States show isn’t complete without chipped teeth, bloody noses or “purple nurples,” he said.
“Most shows [nowadays] are like waiting for the funeral to be over,” MacBlane-Meyer said. “I don’t want to watch someone pose with a guitar the whole time.”
They may not be afraid to break themselves, but they try to be respectful of the venues. Narco States offers to pay for any broken equipment and supplies microphones for live sets, MacBlane-Meyer said.
The rowdy behavior doesn’t outweigh the sound quality, though.
MacBlane-Meyer used to play guitar, but now he sticks to vocals. Since the switch, he’s in charge of the antics, while the rest of band maintains strong, solid instrumentation, Robertson said.
In addition to the wild shows and hot, full rock ’n’ roll flavor of their songs, the band has a personality that stands alone. Their independent, self-reliant approach toward music and extensive discussions on Satanism, Mr. T and the Darknet give Narco States a signature spice.
“People are either unique or they’re not. If you’re trying to form something that’s unique, then obviously you’re a boring asshole,” MacBlane-Meyer said.
Narco States doesn’t have an external manager or a producer, MacBlane-Meyer said.
In fact, Robertson cut the vinyl copies for their 2014 record “Wicked Sun” with a machine he built himself. He’s currently rebuilding the machine — again — because he has a “weirdly obsessive” personality, he said.
By day Robertson is a software developer, McGuire works at UP Coffee Roasters and Johnson is a college professor.
“I feed the sick and sell dead people’s possessions,” Sampson said about his profession as an estate salesman and hospital cook.
“I do autopsies and work with cells and tissues,” MacBlane-Meyer said. “So [Sampson] feeds them their last meal, then I take them in for the autopsy, and he sells all their stuff.”
Even though they all have practical day jobs, music is somewhat of a curse that none of them could escape, MacBlane-Meyer said. He believes musicianship is a genetically engrained trait.
“I think it comes down to this: We are dedicated to the destruction and reconstruction of art through music,” MacBlane-Meyer said. “I might make that a T-shirt.”
Delete Image
Align Left
Align Center
Align Right
Align Left
Align Center
Delete Heading