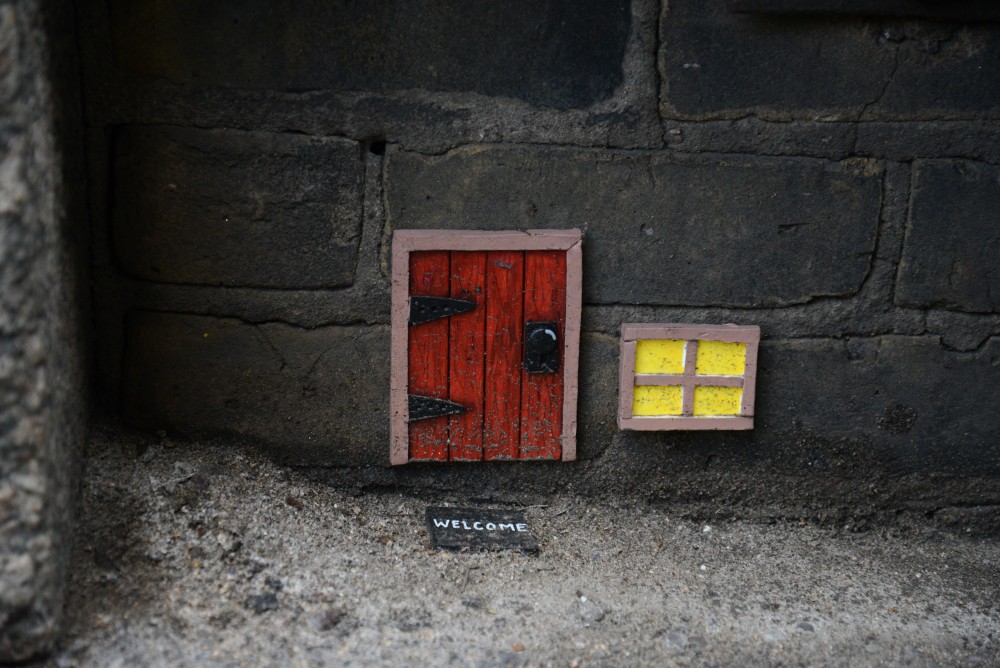 An artist by the name of Mows installs "mouse doors" in Minneapolis on Tuesday, March 8, 2017. This door located in a alley on N 4th street in Downtown Minneapolis.

Tiny black-hinged doors, windows and doormats have popped up around Minneapolis in the last six months thanks to a new local street artist.

Mows — pronounced “mouse” — who prefers anonymity for artistic and legal reasons, moved to the Twin Cities from San Francisco, bringing his little mouse door decals with him.

The artist’s work can be seen anywhere from Spyhouse Coffee in Northeast to downtown by Pizza Lucé.

“I think it adds to the quality of life in a city,” Mows said. “It adds variety. It repurposes ugly, unused, anonymous places.”

Using a self-described “attached” street art style, the doors are usually made from small canvases that he designs. As seen on his Instagram — “mows510” — many also feature an accompanying welcome mat and window that he adheres next to the doors.

Current Minneapolis Mows doors are limited to the artist’s signature textured, boldly-colored aesthetic. However, Mows is starting to work on more “one-off” pieces. His past door designs range from a painted Game Boy, an unzipped zipper and a Poke Ball.

“I have no shortage of ideas,” Mows said. “They come to me faster than I implement them.”

Mows tried to choose more “artsy” and “hip” locations so he could reach an audience that would welcome the art. He even has a few pieces in parks and residential areas.

The University of Minnesota campus is on his list of future homes for the mouse doors.

“I never did a single bit of art until I was 54,” Mows said. “Like nothing. Not even doodles.”

The now 55-year-old was first introduced to street art while traveling around the world.

“I thought, ‘That’s so simple. I could do something like that,'” Mows said after seeing a piece in London that looked, at the time, like a Pacman ghost with two eyes — it was actually an upside-down paper bag, but it got Mows thinking.

“What could I do down low?” he asked himself when he first started. “I could do the doors.”

That was when Mows’s name and style were born.

“Art’s a conversation between artists where they incorporate their ideas and influences,” he said. “I just wanted to be part of that conversation rather than an observer from the outside.”

In less than a year and a half, Mows’ work has garnered national and global attention. Through collaboration and travel, he now has hundreds of doors around the world, including spots in California, the Grand Canyon, Australia and Switzerland.

Despite the mass appeal, some negative connotations do exist around the work Mows does. It’s technically illegal, and Mows said some people think street art, graffiti and tagging are one in the same.

However, Mows thinks the feel and style of his art allows for an element of acceptance.

“It’s approachable and it’s whimsical,” Mows said. “It’s not threatening or ugly or aggressive. So I think a lot of people don’t see it as graffiti.”

Looking ahead, Mows hopes to build the street art scene in Minneapolis with the help of a few other local artists. While he doesn’t think the city will take off culturally, like Paris, London or Berlin, he does think street art has a place in the Twin Cities.

“It adds a momentary light,” Mows said. “You’re walking down the street not thinking about this stuff and then you see it.