Bill would provide incentives for films

Minn. was an ideal location in the 1990s for movies due to “Snowbate.” 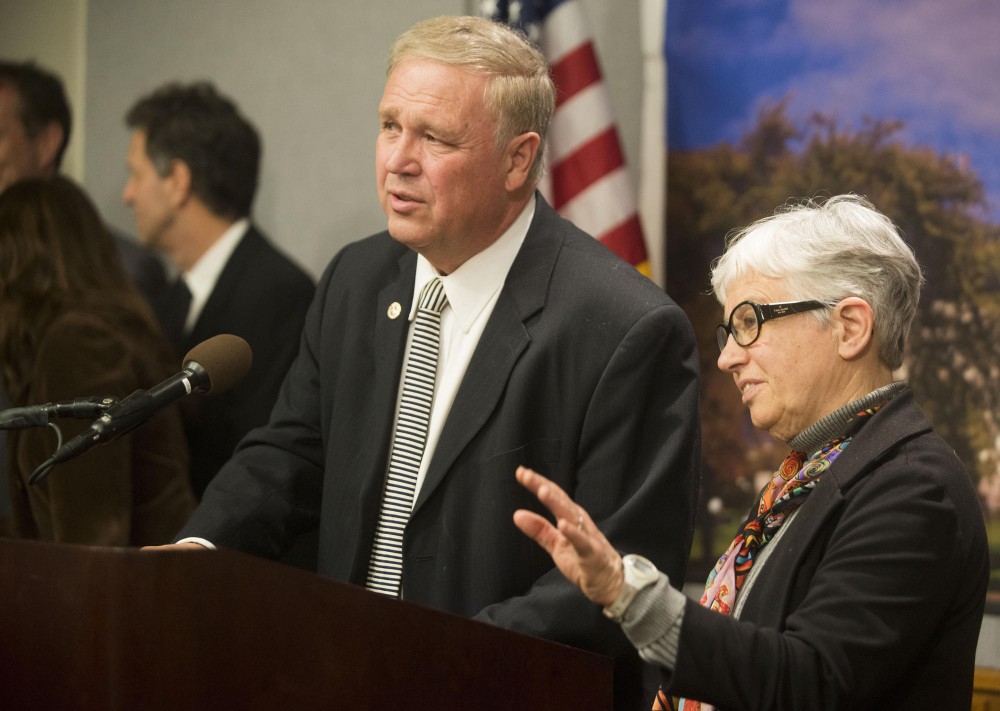 Minnesota State Representatives Dean Urdahl, left, and Phyllis Kahn answer questions about allocating funding for filmmaking in Minnesota on Wednesday, March 6, 2013, at the State Capitol. Lawmakers are proposing tax incentives and legacy funding to bring motion-picture production to the state.

“Gran Torino”  was set to film in Minnesota, but the state lost the opportunity because of poor incentives for filmmakers.

Now, the state Senate is working on a proposal to increase funding for “Snowbate,”  Minnesota’s film rebate system that has been in place for more than a decade.

“In the 1990s, we were the fourth largest domestic market after L.A., New York and Chicago,” said Sen. Richard Cohen, DFL-St. Paul, who created the proposal and a board member of the Film Society of Minneapolis and St. Paul.

“Snowbate” made Minnesota a hot spot for major motion pictures during the 1990s, with films like “Fargo,” “The Mighty Ducks“ and “Grumpy Old Men.” Minnesota was an ideal state to film those movies because of the snow and the rebate.

The amount of filmmakers has slowly declined from this golden era because other states offer higher incentives.

The state’s current rebate system gives filmmakers a 15 to 20 percent reimbursement after the film is complete. If the Senate bill passes, it will increase the reimbursement to 25 percent.

“There are about 40 to 41 states in the United States that have an incentive, and we have to compete with those states to bring production here,” said Lucinda Winter, the executive director at Minnesota Film and TV.

Minnesota has lost business to states like Michigan, where a 40 percent incentive brings flocks of filmmakers to their state.

This plan would give Minnesota partial ownership of movies filmed in the state and also use funds as investments to bring in more tourism and talent.

The funding for this proposal would come from the Legacy Amendment, which voters established in 2008 to fund projects that deal with Minnesota arts, culture, heritage, parks and natural resources. The amendment is funded by taxpayers.

“This is money that the state of Minnesota has to spend,” said Urdahl, a co-author of this proposal. “It has to spend it in certain categories.”

Kahn also noted there are a “wide variety” of areas covered by the Legacy Amendment.

“There are a lot of people after what is still a limited supply of money,” Kahn said.

With the current incentives, a movie must be finished before filmmakers receive any rebate.

With this proposal, filmmakers would receive money from the Legacy Fund before they film. They must have a plan and all their money in place, except anticipated money from the state, before receiving Legacy funds. When the film is finished, Minnesota will receive part of the revenue from the movie.

“Best case is that we make money,” Urdahl said. “Worst case is, like other grants we give in Legacy, we don’t expect to get money back.”

Whether the movie makes revenue or not, Urdahl said it will bring jobs to the state.

“The economy would be stimulated by the fact that business was being done,” he said.

Kahn expressed concern that fellow legislators will not be convinced of this proposal because it should be the responsibility of the Minnesota Film Board to take care of funding, not the Legacy Amendment.

“I think it’s going to be a hard sell for the rest of the Legislature to say we need to have two entities doing these things,” said Kahn.