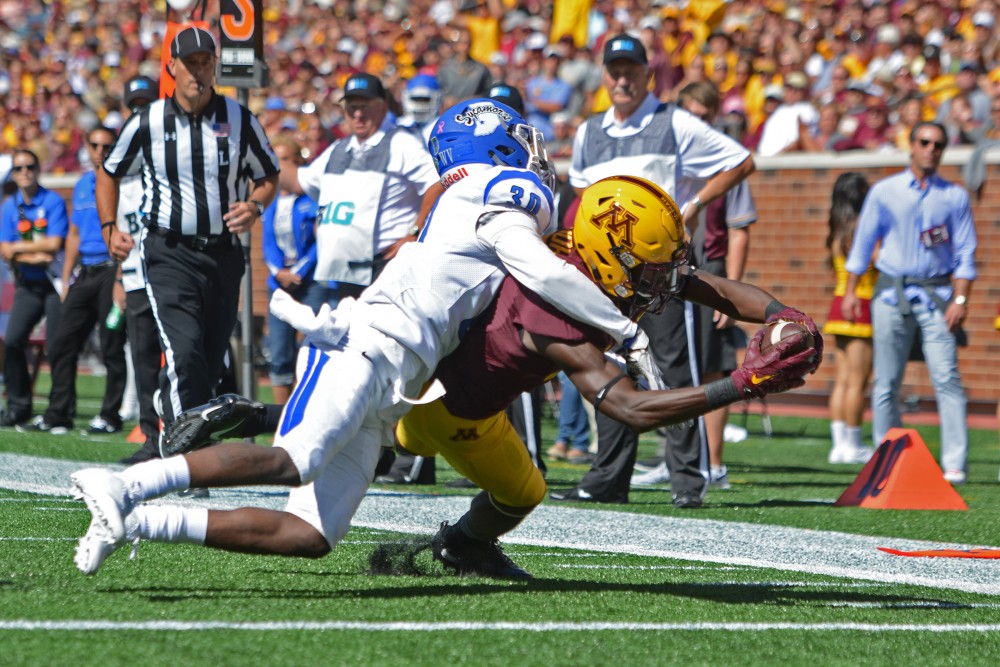 The Gophers end their non-conference schedule
with another easy game, this one coming against Colorado State. A full breakdown, prediction, and other notes can be found below:

The Gophers have
rushed for at least 150 yards and ran for at least three touchdowns in both of
their games so far, and that’s without last year’s leading rusher Shannon
Brooks. He’s been cleared to play Saturday after missing the first two games
with a foot injury, but his role is likely to be limited.

The opponents have
been favorable, but the two running backs who have played during Brooks’s
absence —  Rodney Smith and Kobe McCrary
— had encouraging games and should be able to continue that against Colorado
State.

The Rams’ rushing
defense was 107th in the FBS last year and allowed 180 yards against Minnesota
in their 2015 game. Their rushing defense has been a bit better this season, but
that can be attributed to a small sample size and weak opponents. The Gophers
could very well top their mark from last year with the way they’ve been
performing on the ground so far.

When Colorado State runs the ball:

The name to know is
Dalyn Dawkins. The redshirt junior running back had a breakout year last season
and has had a good start to 2016, but he missed the Rams’ last game with a
hamstring injury. Dawkins appears likely to return for Saturday, but may be
limited. His backups, Marvin Kinsey and Izzy Matthews have been decent fill-ins,
but having Dawkins would give Colorado State a big boost.

The Rams rushed for
172 yards and Dawkins rushed for 92 last time against Minnesota, so he and his
team could create problems for the Gophers again.

Minnesota’s rushing
defense has been good so far – 23rd in the FBS – but it hasn’t seen a running
back as skilled as Dawkins. He will be Minnesota’s first true test if fully
healthy.

Quarterback Mitch
Leidner has had a hot start to the season. He has thrown and ran for six
touchdowns, completed almost 60 percent of his passes and committed no
turnovers. Although these were
weak passing defenses, Colorado State should be easy, too.

The Rams are 114th
in the FBS this year in yards allowed through the air, with an average of 290.7
per game, even with a favorable schedule. Colorado State had
an elite passing defense last year, but four players in their defensive
backfield graduated. The group accounted for 75 percent of interceptions. Chalk
this one up as another good game for the veteran Minnesota quarterback.

When Colorado State passes the ball:

The Rams will have
unpredictable true freshman Collin Hill making his second career start at
quarterback. Hill had a great first start with over 300 yards and four
touchdowns through, plus a 51-yard touchdown run to top it off. But similar to
Leidner’s game, that was against a FCS opponent.

Minnesota’s passing
defense has taken a hit with cornerbacks KiAnte Hardin and Ray Buford
suspension — and it showed at times during the Indiana State game. The
Sycamores scored four touchdowns through the air.

The Gophers are currently
is in the bottom half of the FBS in passing defense. They still have key
players, like safety Damarius Travis and cornerback Jalen Myrick, in the
secondary, but this matchup could be closer than it may seem.

There are some
concerns with the Gophers defense, but Minnesota shouldn’t struggle to put
enough points on the board and win by a sizeable margin.

Around the web on the Gophers and the Rams:

-Favorite read of
the five listed here. It’s a different story about something that probably hasn’t
happened before: a college football running back who quit the game to legally
grow marijuana. The Coloradoan’s Matt L. Stephens does a deep dive into the
story of Treyous Jarrells, a Florida native that came to Colorado because of
the state’s legalization of Marijuana. He treated his chronic pain from playing
football with marijuana, and dropped out over concerns that he had failed a
drug test. This in-depth feature goes into Jarrells’ constant discomfort from injuries
sustained from football and the NCAA’s policy on marijuana use by its athletes.
It’s an entertaining read accompanied by great visuals.

-“Riddick Moss is who I’ve always
been. I just now have a platform to show my personality. I refer to myself
as a bad boy.” Andy Greder of the Pioneer Press did a Q and A with Mike Rallis,
the former Minnesota linebacker who is now in the WWE and goes by Riddick Moss.
Rallis talks about how he got into the WWE, his brother, Gophers linebacker
Nick Rallis who he calls a “pyscho”, and his Brock Lesnar sightings.

-The Rocky Mountain
Collegian’s Eric Wolf writes a story about the large number of freshmen making
an impact on CSU football this year. These players have a ways to go, but could
be the future stars of the program.

-Tyler Johnson has
had a promising start to his collegiate career, and his lasting influence on
his old high school, Minneapolis North. Joe Christensen of the Star Tribune
writes about the “magician’s” impact on his alma mater and what he’s done for
the school.

-Here’s another one
from the Coloradoan’s Matt L. Stephens and it’s a worthwhile read if you’re interested
by collegiate sports team’s media policies. It’s a strong opinion, and not one
I agree with on all fronts, but it was well argued and thought provoking.

-It’s only been two
games but there are some signs this isn’t the Minnesota passing defense from last year. I don’t think it will be a major concern
until they lose a game or barely win one as a result, but it looks like they
have had a hard time adjusting to the loss of Eric Murray, Briean
Boddy-Calhoun, and the suspensions of defensive backs KiAnte Hardin and Ray
Buford. The Gophers are one of six teams in the Power 5 to have allowed seven
or more passing TDs, and they’re the only one in that group to have played just
two games. A good game against Colorado State would go a long way for this
group and show that they may be turning around.

2. This offense looks a lot better than last
year, but nine successful attempts isn’t enough to determine if this team has
improved in the red zone.

-This offense has
looked a lot better than they were last year. Leidner is doing well against easy competition, something he failed to do last year
at times, and the running game is looking as strong as ever. One statistic that
has been brought up is the Gophers’ red zone percentage, where they are nine
for nine in converting their opportunities into touchdowns. Minnesota was 105th in the FBS in
converting red zone opportunities into touchdowns last year. Let’s wait until
they get to around 20 attempts and face harder opponents to determine whether
or not they’ve actually improved in that area.

3. These Minnesota linebackers are really, really good and have a lot of depth.

-The Gophers were
down redshirt senior Nick Rallis for all of the Indiana State game and junior
Jonathan Celestin for part of it and the linebackers didn’t seem to miss a
beat. Redshirt senior Jack Lynn, redshirt junior Cody Poock, and sophomore
Julian Huff are some of Minnesota’s best defenders and have excelled at
stopping the run game. Freshman Kamal Martin has made some nice plays in his
minutes as well. The group has a lot to look forward to this season.

The Minnesota Daily’s coverage of the team
from this past week:

-Minnesota’s
passing defense has struggled and there’s no way around it. An article with
reactions from head coach Tracy Claeys and defensive coordinator Jay Sawvel.

-Two games against
non-conference opponents, but Leidner has made

3. Questions from the Other Side: Colorado State football beat writer Eric Wolf

-The second
installment of a weekly Q and A interviewing someone knowledgeable on
Minnesota’s opponent. This week’s subject was the Rocky Mountain Collegian’s
Eric Wolf, who broke down Colorado State and gave a score prediction.

-The update on
where Minnesota stands after an early bye week.

5. McCrary emerges as third running back option in victory over Indiana State

-A story from the
Indiana State game about McCrary’s breakout performance.