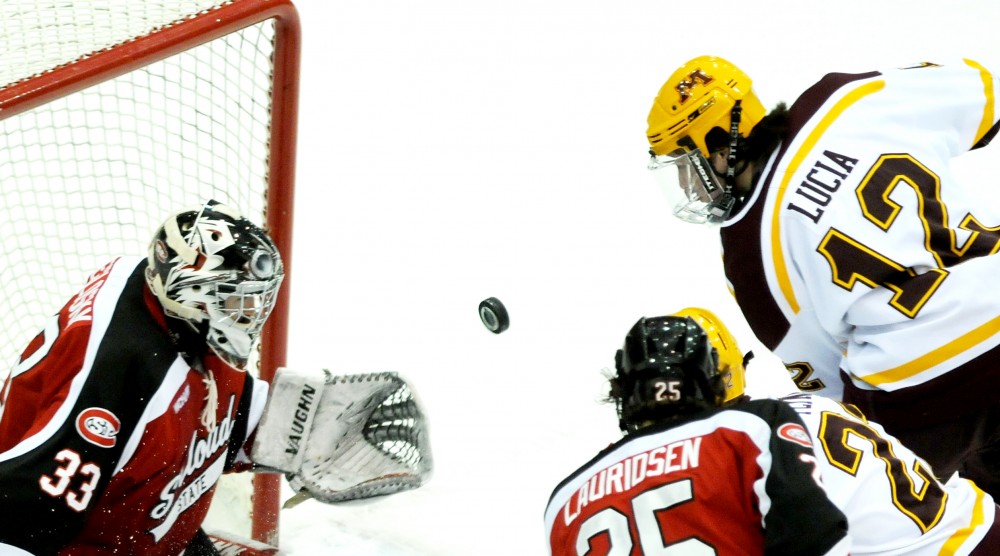 Junior forward Tony Lucia sends a puck towards the St. Cloud State goal as junior goaltender Jake Weslosky makes an attempt to swat it away. Weslosky gave up five goals Friday night before letting six more through on Saturday.

A hat trick from 2008 Hobey Baker Award finalist Ryan Lasch wasnâÄôt enough to prevent the Minnesota menâÄôs hockey team from completing a regular season sweep over St. Cloud State Saturday night at the National Hockey Center. After holding Lasch to zero points in the first three meetings this season between the in-state rivals, last yearâÄôs Western Collegiate Hockey Association scoring champ came alive in the final meeting, including a pair of third period goals that sparked a Huskies team which had been trailing by four goals. âÄúWe did a good job the first five periods of the weekend really shutting him down and not letting him get his offense going,âÄù sophomore forward Mike Hoeffel said. âÄúIn the third period, we kind of let down a little bit, and he was able to show flashes of what heâÄôs got.âÄù Unlike Friday night at Mariucci Arena when Minnesota (12-5-5 overall, 9-4-3 WCHA) created a large lead and managed to equalize one of the conferenceâÄôs top offenses en route to a 5-1 win, Saturday saw the Gophers allow St. Cloud State to creep back into the game despite posting the highest goal total in nearly two years. âÄúIt was a good lesson learned that we need to finish the game,âÄù Hoeffel, who tallied three goals and an assist over the weekend, said. âÄúObviously, thatâÄôs something we will take into consideration for future games.âÄù The Huskies brought the game to within one goal in the third period before Gophers junior forward Ryan Stoa tallied his team high 15th goal when he tapped in an empty netter with eight seconds left for the 8-6 win. âÄúWe should have come out and played a little better third period,âÄù junior forward Jay Barriball said. âÄúBut the bottom line is we got a win, four points and the sweep, so weâÄôre pretty happy.âÄù Sweeping State A weekend after being strongly swept by North Dakota âÄî the first time Minnesota has been swept all season âÄî the Gophers bounced back with just their second sweep of the season this weekend to close out a tough start to the second half before next weekendâÄôs break. âÄúThis eases last weekend a little bit,âÄù coach Don Lucia said. âÄúYou look at the four game segment youâÄôve got to play; youâÄôre at North Dakota for two, St. Cloud [is a] home and home, if you got 2-2 that wouldnâÄôt be bad.âÄù The Huskies (12-11-1, 7-9-0) also fell victim to Minnesota in a pair of low-scoring, one-goal games in the GophersâÄô first series of the season. Penalty/Power play Minnesota continued to hold its edge as the WCHAâÄôs top special teams program. The Gophers power play went 3-for-8 against St. Cloud State including a 2-for-4 performance in SaturdayâÄôs crazy contest that raised the teamâÄôs conversion rate to 21.7 percent. The teamâÄôs penalty kill was highlighted simply by the amount of time it spent on the ice this weekend. The Huskies were shutout in five chances Friday night and went 2-for-8 Saturday âÄî raising MinnesotaâÄôs kill rate to a WCHA-high 91.4 percent. âÄúI think at the end we were a little tired âÄ¦ especially with all the penalties we had to kill in the first two periods,âÄù Lucia said, adding that the late first period ejection of penalty killer Tony Lucia and playing short on the blue-line only made fatigue more prominent. âÄúWe relied on 10 or 12 guys a lot tonight.âÄù