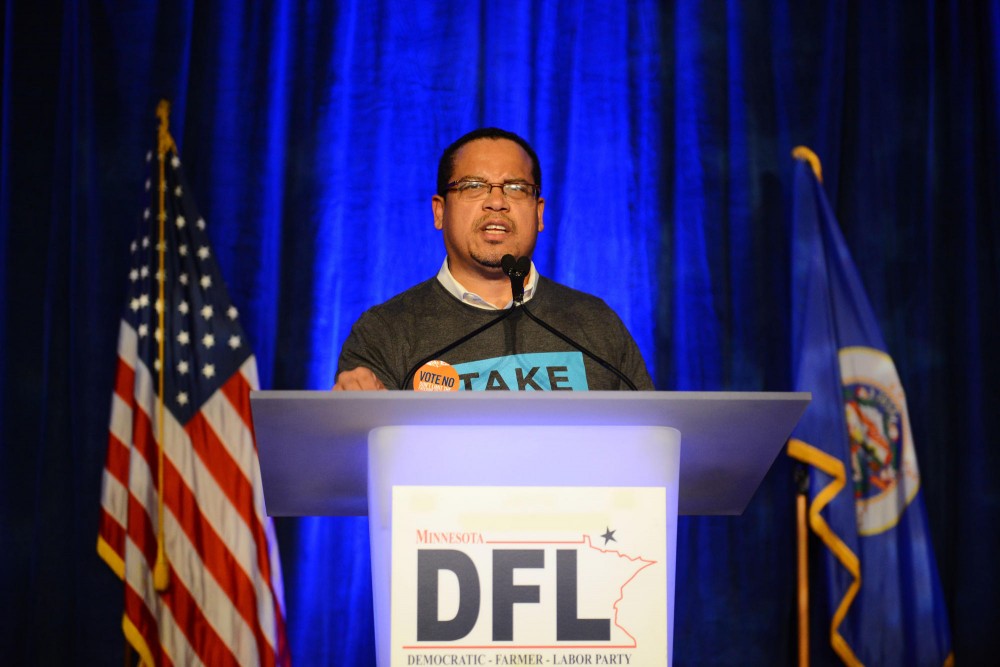 Rep. Keith Ellison speaks to the crowd at the DFL Party at Crown Plaza Riverfront in St. Paul, Wednesday evening.

Rep. Keith Ellison, DFL-Minneapolis, retained his seat in the U.S. House of Representatives on Tuesday when voters re-elected him for a fourth term. He has served the district since 2006.

“Elections are over and now it’s time to get back to work,” Ellison said.

His opponent, Fields, said he knew his chances of winning were slim from the beginning based on the district’s voting history. According to the Cook Partisan Voting Index, the district traditionally leans heavily Democratic.

“Nobody expected much out of this campaign,” Fields said. “I just hope some people look at the election’s results and say, ‘Holy cow, these guys were serious.’

As a Republican candidate from the left-leaning district, Fields said he hoped for “record-breaking performance” at Tuesday’s polls.

“I understand that the Republican Party in this district doesn’t have a very good reputation,” Fields said. “But once we started talking to people, we saw them turn in our direction and give us a fair shot.”

The candidates, who often sparred in heated debates, both agreed the road to Election Day wasn’t smooth.

“Chris’ campaign has been meaner than races in the past,” Ellison said.

Ellison, who became the district’s first African-American representative when elected, said he believed his Muslim religion was a target for the Fields campaign.

“Being attacked for my religion never bothered me before,” Ellison said. “This time around though, it was a little meaner.”

Candidates debated three times prior to the election — the third of which raised the most controversy with name-calling and “low-blows.”

Fields said he considered Ellisons’ debate performance the “worst in the state’s history, and I just fundamentally believe the people [of the 5th District] deserve better than that.”

Many University of Minnesota students praised Ellison at the polls Tuesday. Students cited tuition costs as their primary concern for the district.

“It’d be nice for college affordability to be addressed,” said material science senior Zach Zadow.
Epidemiology graduate student Megan Slater said she voted for Ellison because she hopes he can address issues central to campus life.

“I hope Ellison addresses housing, tuition and anything that benefits students,” she said.
Ellison said he plans to begin his new term by addressing the issues of infrastructure improvements and college affordability.

“We’ve got to make sure that the University doors stay open,” Ellison said. “That means we have to reduce the cost of debt.”

He said he wants to return to the day where students could work their way through college with a part-time job, though “that’s nearly impossible today.”

“We have to make college more affordable by promoting loan forgiveness,” Ellison said. “I plan to work creatively with the University to hold tuition down.”

Larry Jacobs, a political science professor at the Humphrey School of Public Affairs, previously told the Minnesota Daily that Ellison’s efforts in Washington stand out.

“He truly is a rising star,” Jacobs said.

In addition to looking at his track record in Washington, students said they based their voting decisions on the “platforms Ellison stands behind.”

“I’m voting for Ellison because I’d like to see a leader from our district that is ‘vote no’ on both amendments,” said mechanical engineering junior Mattie Buezis.